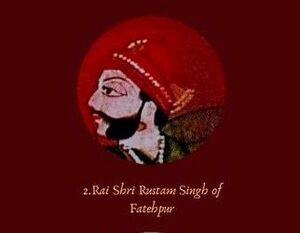 Rustam, (रुस्तम, भरतपुर) (1732 AD) a Jat king of the Sogariya clan, laid the foundation of the modern city of Bharatpur. After him, control passed to his son, Khemkaran and then to Suraj Mal. Khemkaran was a warrior. He was awarded with the title "Faujdar", which is still used by all Sogariyas.

Chronology of rulers of Sogar 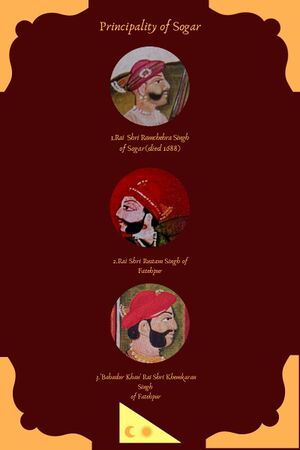 Chronology of rulers of Sogar

The principality of Sogar was carved out of Mughal empire by Rai Ramchehra Singh of Sogar who was an close associate of Raja Ram Singh (also know as Raja Ram Jat, one who ended Mughal rule in Agra Subah).

Rai Ramchehra Singh was succeeded by Rai Rustam Singh Sogarwar who shifted his capital and founded the city of Fatehpur (later Bharatpur), Rustam Singh fought in the Jat-Mughal War (1688-95).

Rustam Singh was succeeded by Khan Bahadur Rai Khemkaran Singh Sogarwar who was the most ablest of the Sogarwars. He received Khilat and title of 'Bahadur Khan (Brave Chief)' from Emperor Farukhsiyar (as Mughal wanted to pacify Jats). He also had an important role in making Mohamad Shah the emperor. After the death of Rao Churaman Singh of Thun, the civil war started between the Jats in which Sinsinwar emerged as the leading canton. Khan Bahadur Rai Khemkharan Singh was the biggest threat to Raja Badan Singh of Deeg. Kunwar Suraj Mal ( Sujan Singh) annexed the principality of Sogar (Khemkaran died in the Battle of Fatehpur). The Fort of Fatehpur was reconstructed and named Bharatpur. The other Sogarwar Chiefs i.e Thakur of Awaeyr, Thakur of Tuhia and Thakur of Sewar soon accepted the rule of Maharaja Badan Singh.