The turban (from Persian Template:Lang, dulband via the Turkish Template:Lang) is a headdress consisting of a long scarf-like single piece of cloth wound round the head or an inner hat.

The long strip of cloth was soaked in water at a well, and then wrapped around the head. The layers of wet cloth kept wet all day in the hot dry air.

Contemporary turbans come in many shapes, sizes, and colors.

In Western countries such as the United States, Canada, Europe, etc., men seen wearing turbans in public are likely to be Sikhs, who wear turbans to cover the long uncut hair worn as a sign of their commitment to the Sikh faith.

Unlike any other religion, the turban is closely associated with the Sikh faith. Those who undergo initiation, Khande di Pahul (a type of baptism), to join the Khalsa are forbidden to cut their hair as well as non-baptised Sikhs. Such men are required to wear a turban to manage their long hair. Mostly baptised women also wear turban however non-baptised sikh women usually do not wear turban. Un-initiated Sikhs are still required to leave their hair unshorn. The vast majority of people who wear turbans in Western countries are Sikhs. In India, a turban is commonly called pagṛī (ਪਗੜੀ). Sikhs often call it dastār (ਦਸਤਾਰ), a more respectful Punjabi word for 'turban'. 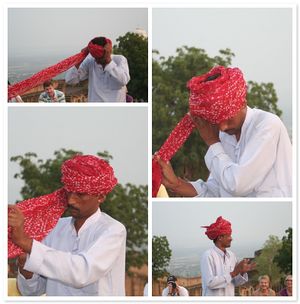 Rajput men from the Indian state of Rajasthan wear distinctive turbans. In Hindi, a turban is called a pagṛī (पगड़ी) or sāfā (साफ़ा). Many styles of turbans are found in Rajasthan; it is said that the style (and smell) of the turban changes with every 15 km you travel. In some areas, especially in Rajasthan the turban's size may indicate the position of the person in society. 'Royalty' in different parts of India have distinctly different styles of turbans, as do the 'peasants', who often just wear a towel wound around the head.

The people of the Indian districts of Mysore and Kodagu wear turbans called Mysore peta. Distinguished people are honoured by the award of a Mysore peta in a formal ceremony. In Kodagu district people wear it with traditional dress on special occasions such as marriages.

The men of many Islamic cultures have worn or wear turbans. They are called imamah (Arabic: عمامة), dastār (Persian: دستار), sāfā (Hindustani: साफ़ा سافا), and many other words in local languages

In modern Persian Gulf countries, the turban has been replaced by the plain or checkered scarf (called keffiyeh, ghutrah or shumagh), though the turban tradition is still strong in Oman (see Sultan Qaboos of Oman).

Turbans as hats in Western countries

Turbans have been worn by men and women since the 17th century, without ever becoming very common. Now that hats are infrequently worn, turbans too are relatively uncommon. They are worn primarily by women of West Indian descent and by female cancer patients.

Some African-American men wear scarves on their heads, and sometimes these scarves are elaborated to the point that they might be called turbans.

Humans have been wearing cloth on their heads since the invention of cloth. Texts and art that survive from many past cultures mention turbans.

In some western countries a number of turban-wearers have been attacked or abused on the mistaken assumption that all men wearing turbans are Muslims. Sikh men wearing turbans have been harassed or even killed because of their headgear. [4][5] [6][7] One widely publicized incident was the murder of Balbir Sodhi. In fact, North American and European Muslims rarely wear turbans, preferring the small skullcap often called a kufi.

Back to Jat Costumes