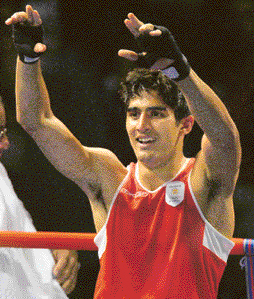 Vijender Singh, the Olympic Bronze Medalist Boxer has made India proud again by winning bronze medal in the middle-weight category at Milan, Italy. This is India's first medal in the World Boxing Championships ever. This has broken a jinx for Indian boxers who have never won a medal in WBC. He won Arjuna Award - 2006 in Boxing. He was decorated with country's prestigious civilian award Padma Shri on 26 January 2010.

He comes from village Kaluwas in Bhiwani district in Haryana.Vijender has joined as a Senior Railways Ticket Examiner at Jaipur a few months ago. Vijender’s family owns no land. His father, a driver with Haryana Roadways, has a house in Kaluwas village along the Meham-Bhiwani road. Vijender’s cash rewards for his medals in various international meets have helped the family build a house with all the trappings of a comfortable urban dwelling. It has an inverter to keep the desert coolers running during power cuts. The furniture is new and the kitchen “modern” by village standards.

Vijender has studied in Vaish College in Bhiwani and is graduate. Recently he is seen in commercial Television Ads as well.

Haryana govt has promised him to recruit as DSP in Police.

Vijender’s mother Krishna has also ensured that he got all the milk and curd he needed to make him strong. “Besides, I always gave him the money he wanted to pursue his sport”, she says. Vijender’s elder brother Manoj, a Havildar in the Army, is also a boxer. So are three of his cousins.

Vijender Singh won the Bronze medal at the 2008 Summer Olympics in Beijing in People's Republic of China.[1][2] He was the first Indian boxer to win a medal at an Olympic and World Championship game.[3]

For London Olympics, 2012, Boxer Vijender qualified for participation in his category.[3][4][5][6][7] He has become fifth Indian boxer to do so.

Vijender Singh (75kg) has now become the first Indian boxer to qualify for the Olympic Games for a third Consecutive time, after outpunching Mongolia’s Chuluuntumur Tumurkhyag, 27-17, in his quarterfinal bout.[3][4][5][6][7]

During an interview after booking his berth at the upcoming Olympic games, the boxer said:

"I will now give it my all in the Olympics and prove that I am the best. It's such a relief to have got qualified. The fact that I am the first Indian boxer to have qualified for a third successive Olympics makes it all the more special."[3][6][7]

"I don't have words to describe how well he fought. It was a fantastic display by a proven talent".[3]
“It was a mature performance by Vijender. Despite trailing, he never lost focus or stopped attacking. By the final round, his opponent was no match for him."[5]

The boxer is confident that this time, he will perform even better than the Beijing Olympics.[5]