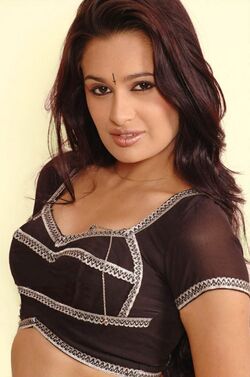 Yuvika is daughter of Shri R. N. Tomar, a Jat businessman from Meerut originaly from Baraut now in Baghpat District.. Her parents wanted to make her a doctor.But, in view of her interest in she was allowed to choose modelling and acting as her profession. [1] She was noticed in a talent hunt competition and did a few commercials before landing her debut film. She has done her schooling from Meerut and fashion designing course from Delhi.

Yuvika Choudhary is one lucky girl. The former Zee Cine stars ki khoj contestant, seen in various commercials, the Zee serial Astitva, a music video with Himesh Reshammiya and a Telegu film, has recently made it to the Bollywood big league.

She has been signed by none other than Farah Khan to star in her movie Om Shanti Om, alongside Shah Rukh Khan, Shreyas Talpade, Arjun Rampal and the very promising supermodel turned actress Deepika Padukone.[2]

She appeared in Summer of 2007 opposite Anupam Kher's son Sikandar Kher.