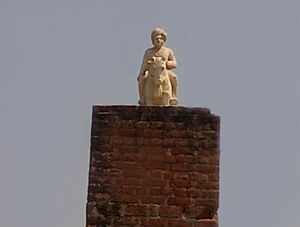 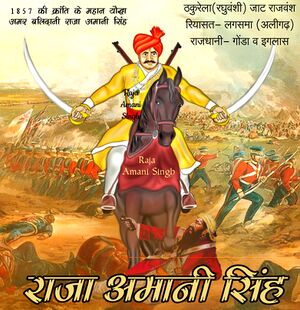 Thakur Amani Singh Thakurela was great freedom fighter and chieftain of Thakurela clan of Jats from Gahlau, Aligarh, Uttar Pradesh . He fought against British rule in Aligarh district of Uttar Pradesh in the revolt of 1857. He was coronated as Raja of the Iglas, Khair and nearby region by the Jat community at Aligarh.

Thakur Amani Singh was born at Gahlau village of Thakurela Jats of Lagsama region of Aligarh district. He was born in the aristocratic family of Zamindars of Gahlau.

He is also referred as Raja Amani Singh because of his control over a vast area of Aligarh district and made to run parallel government in the region with the bitter opposition of Britishers.

He was an audacious warrior and was skilled in wrestling,horse riding,sword fighting and spear fighting.It is said by the local historians that he was so brave that he could fight with swords in both hands while riding a horse without holding its rein. He was having a horse whose tales are cherished by the people of Aligarh and nearby districts,that horse was so ferocious when Amani sat on its back and fought in the battle,that horse itself also started killing britishers.

Thakur Amani Singh united the both factions of Thakurela Jats which were Atthaeesi and Baeesi and made them fight against Britishers.

He attacked and captured the Tehsils of Iglas,Khair and Koil.Britishers after failing various times retaliated in heavy numbers during rainy season which lead to destruction of match lock guns of Jat army under Thakur Amani Singh.He was captured by Britishers and trialed at Koil Magistrate office and hanged to death.

Back to The Freedom Fighters