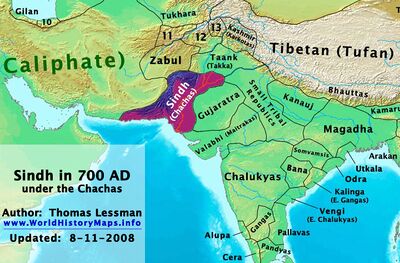 The Kingdom of Sindh in 700 AD

Chach (चच) (c. 610-671) was a Brahmin who reigned as king of Sindh in the mid-7th century AD. A former Chamberlain and Secretary to the king Rai Sahasi II, Chach ascended to the throne[1] by marrying the king's widow. Chach expanded the kingdom of Sindh, and his successful efforts to subjugate surrounding monarchies and ethnic groups into an empire covering the entire Indus valley and beyond were recorded in the Chach Nama.

Alore was the capital of Raja Chach. Chach belonged to the current known city of Chachran Shariff.

The last Sindhu ruler was assassinated by a Brahmin called Chach in conspiracy with corrupt queen. He sat himself on the throne. After the death of Chach, his son Dahir ascended the throne.

Rai Meharsan II had a war with Badshah Nimroz of Iran in which he was killed. After him Rai Sahasi II became the king. Once Sahasi Rai second fell ill. He called his minister to see the letters. The minister sent his munshi Chach for this purpose. The wisdom of Chach influenced the king and he appointed Chach to look after the palace. This way he got free entry into the palace. Chach developed illigal relations with the queen Suhanadi. Chach conspired with the Rani Suhanadi and killed Raja Sahsi Rai second and married with the queen and became ruler of Sindh starting a line of Brahmin rulership in samvat 689 (632 AD).[2]

Chach was a Brahmin who rose to a position of influence under Rai Sahasi II, King of Sindh and a member of the Rai dynasty. Chach was given the appointments of Chamberlain and Secretary[3] to the King, and retained influence after Rai Sahasi's death. He became the lover of Chach's widow, and their marriage enabled him to receive the kingship. His claim to the throne was challenged by Rai Sahasi's brother, Rana Maharath, the king of Chittor. Chach defeated and killed Maharath in 640. It is claimed in the Chach Nama that Maharath, seeing that his army was making little headway against that of Chach, devised the sly stratagem of challenging Chach to a duel. Maharath took advantage of the fact that as a trained Kshatriya warrior he would have a decisive advantage over Chach, a Brahmin Court Administrator with very little battle combat training. Chach, knowing he could not refuse the offer of a duel without appearing weak, and understanding clearly the machiavellian brilliance of this offer, realized that he had to use all of his strengths in strategy and diplomacy in order to survive and emerge victorious in this deadly situation. He thought quickly and devised an equally clever stratagem as his response in this high stakes chess game. Chach claimed that as a Brahmin he could not fight on horseback and suggested that they both fight on foot. Maharath readily agreed knowing that he would have the overwhelming advantage at close quarters. The two dismounted to engage in a duel, but Chach instructed his stirrup-holder to follow him, as they drew close Chach leapt onto his horse and charged his rival, severing the head of Rana Maharath from his body with one blow.[4]

Chach enlisted his brother Chandar (also known as Chandra) to help him administer the kingdom. He then launched a campaign against a succession of autonomous regions; he defeated his opponents along the south bank of the River Beas, at Iskandah, and at Sikkah. He sacked Sikkah, killing 5,000 men and taking the remainder of its inhabitants prisoners. A significant number of these captives were enslaved, and much booty was taken. After this victory, which he appointed a thakur to govern from Multan, and used his army to settle boundary disputes with Kashmir. Chach also conquered Siwistan, but allowed its chief, Matta, to remain as his feudatory.

Later, he expanded his rule into Buddhist regions across the Indus River. These efforts culminated in a battle at Brahmanabad, in which the region's governor, Agham Lohana, was killed. Chach remained in Brahmanabad for a year to cement his authority there, and appointed Agham's son Sarhand as his governor; Sarhand was also wed to Chach's niece. Chach took Agham's widow as his wife, as well. He utilized a variety of other measures to ensure the subjugation of the local ethnic groups, including the taking of hostages and forbidding the Jat and Lohana tribes from carrying weapons. The Jat and Lohana were also banned from riding saddled horses, wearing silk or velvet, and from donning headgear or footwear. Furthermore, they were forced to wear black or red scarves.

From Brahmanabad, he invaded Sassanid territory through the town of Armanbelah, marching from Turan to Kandahar. He exacted tribute from the latter before returning.

During the reign of Rai Sahasi, for whom Chach served as chamberlain, forces of the Umayyad Caliphate raided parts of Sindh. An attack on the coastal cities of Debal and Thana, led by Mughaira, was repulsed; the incursion was aimed at securing plunder, and was not sanctioned by Caliph Umar. The Caliph was dismayed by the raid, dismissing his governor of Bahrain for authorizing it. Mughaira himself had been killed at Debal.

In 644, after the Muslim conquest of Sassanid Empire, the Rashidun army entered Makran and defeated Sindh's army in the Battle of Rasil, annexing Makran and eastern Balochistan. Caliph Umar (634-644), however, for the time being, disapproved of any incursion beyond the Indus river and ordered his subordinates to consolidate their position west of Indus.[5] During the reign of Caliph Uthman ibn Affan (644-656) Muslim forces captured Qanzabil, a northern outpost of the Rai dynasty. Until 662, when it was retaken by Sindhi forces, it served as the easternmost garrison town for the Muslims.

Several places along the Sindhu River were named after Chach; among these are Chachpur, Chachar, Chachro, Chachgaon, Chachi.[6]

Upon his death, Chach was succeeded by Chandar; Chandar is stated to have ruled for eight years, whereupon Rai Dahir, Chach's eldest son, inherited the throne.

Rana Maharath, the ruler of Chittor, was brother-in-law of Raja Sahasi Rai. Rana Maharath attacked Chach but Rana was killed in the war in 632. After Chach his son Chandra became king of Sindh. Later after death of Chandra Raja Dahir became the ruler of Sindh.