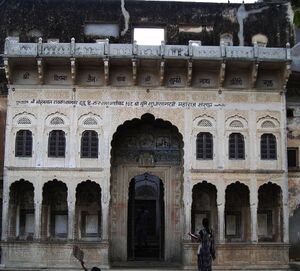 Rewas is an ancient village near Harsh in Sikar district Rajasthan. It is associated with the early history of Chauhans. The ruins of Harsh indicate its antiquity. Local tradition reveals that Harshanatha village in ancient times was a well developed township surrounded by a wall. A hindi poem reveals as under[2]:

From one other source we get following poem prevalent in the area:[3]:

It is said that in space between he big tank of Harsh and Jagmalpura tomb was a market place. There were 900 wells. The old city was spread over about 38 miles and constituted of four villages, namely