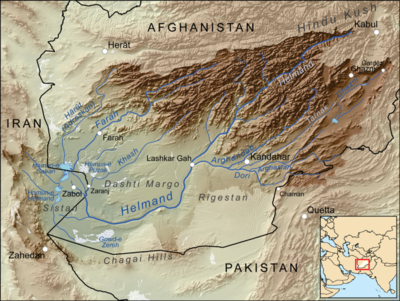 Helmand (Pashto: هلمند), Lo-mo-in-tu, is one of the 34 provinces of Afghanistan and also the name of a river.

Helmand Province is named after the Helmand river. The boundaries of the province of Helmand were once known as kingdom of Sakastan.

Districts of Helmand are

The name comes from Avestan Haētumant, literally "dammed, having a dam", cognate with Sanskrit Setumanta "having a dam", which referred to the Helmand River and the irrigated areas around it.[2] The name was borrowed into Greek and Latin as a compound with Eastern Iranian *raha (cf. Scythian Rha "Volga"), "river".

The Helmand River stretches for 1,150 km (710 mi). It rises in the Hindu Kush mountains, about 80 km (50 mi) west of Kabul (34°34′N 68°33′E), passing north of the Unai Pass,in the eastern proximities of Hazarajat, in Behsud, flows west to Daykundi and Uruzgan. It crosses south-west through the desert of Dashti Margo, to the Seistan marshes and the Hamun-i-Helmand lake region around Zabol at the Afghan-Iranian border (31°9′N 61°33′E).

The river remains relatively salt-free for much of its length, unlike most rivers with no outlet to the sea. This river, managed by the Helmand and Arghandab Valley Authority is used extensively for irrigation, although a buildup of mineral salts has decreased its usefulness in watering crops. Its waters are essential for farmers in Afghanistan, but it feeds into Lake Hamun and is also important to farmers in Iran's southeastern Sistan and Baluchistan province.

The Helmand valley region is mentioned by name in the Avesta (Fargard 1:13) as the Aryan land of Haetumant, one of the early centers of the Zoroastrian faith in pre-Islamic Afghan history. But owing to the preponderance of Hindus and Buddhists (non-Zoroastrians), the Helmand and Kabul regions were also known as "White India" in those days.[3] Some Vedic scholars (e.g. Kochhar 1999) also believe the Helmand valley corresponds to the Sarasvati area mentioned in the Rig Veda as the homeland for the Indo-Aryan migrations into India, ca. 1500 BC.[4]

Hewitt[5] notes the connection between Jats and Goths: "The Jats ... trace their descent to the land of Ghazni and Kandahar, watered by the mother-river of the Kushika race, the sacred Haetuman or Helmand. Their name connects them with the Getae of Thrace, and thence with the Gattons, said by Pytheas to live on the southern shores of the Baltic, the Gaettones placed by Ptolemy and Tacitus on the Vistula in the country of the Lithuanians, and the Goths of Gothland = Sweden. This Scandinavian descent is confirmed by their system of land-tenure, for the chief tenure of the Muttra district is that called Bhagadura, in which the members of the village brotherhood each hold as their family property a separate and defined area among the village lands, according to the customs of the Bratovos of the Balkan peninsula and the Hof-bauers of North-West [6] Germany .. The Getae of the Balkans are said by Herod to be the bravest and most just of the Thracians."