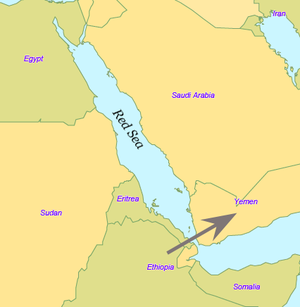 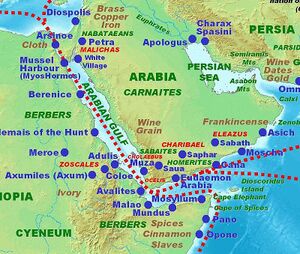 It extends hundreds of kms into the Arabian Sea and lies along the southern side of the Gulf of Aden. The area is the easternmost projection of the African continent. Referred to in ancient and medieval times as the land of the Barbara and Habesha,[3] the Horn of Africa denotes the region containing the countries of Djibouti, Eritrea, Ethiopia, and Somalia.[4]

This peninsula is known by various names.

Omo-Kibish I (Omo I) from southern Ethiopia is the oldest anatomically modern Homo sapiens skeleton currently known (196 ± 5 ka).[15] The recognition of Homo sapiens idaltu and Omo Kibish I as anatomically modern humans would justify the description of contemporary humans with the subspecies name Homo sapiens sapiens. A comprehensive review concluded that the more complete fossils represent some of the most significant discoveries of early Homo sapiens made thus far, owing not only to the morphological information they possess, but also to their well constrained geochronology and archaeological context.[16][17][18] Because of their early dating and unique physical characteristics idaltu and kibish represent the immediate ancestors of anatomically modern humans as suggested by Mitochondrial Eve and Y-chromosomal Adam[19][20][21] and the Out-of-Africa theory.[22][23][24]

The Bab-el-Mandeb crossing in the Red Sea: now some 12 miles (20 km) wide, in prehistory narrower.

The Southern migration route of the Out of Africa occurred in the Horn of Africa through the Bab el Mandeb. Today at the Bab-el-Mandeb straits, the Red Sea is about 12 miles (20 kms) wide, but 50,000 years ago it was much narrower and sea levels were 70 meters lower. Though the straits were never completely closed, there may have been islands in between which could be reached using simple rafts. Shell middens 125,000 years old have been found in Eritrea,[32] indicating the diet of early humans included seafood obtained by beachcombing.

The findings of the Earliest Stone-Tipped Projectiles from the Ethiopian Rift dated to more than 279,000 years ago in combination with the existing archaeological, fossil and genetic evidence, isolate this region as a source of modern cultures and biology, and it is considered the place of origin of humankind.[25][26]

Ethiopian agriculture established the earliest known use of the seed grass teff (Poa abyssinica) between 4000–1000 BCE.[29] Teff is used to make the flatbread injera/taita. Coffee also originated in Ethiopia and has since spread to become a worldwide beverage.[30]

Together with northern Somalia, Djibouti, the Red Sea coast of Sudan and Eritrea is considered the most likely location of the land known to the ancient Egyptians as Punt (or "Ta Netjeru," meaning god's land), whose first mention dates to the 25th century BCE.[31]

Dʿmt was a kingdom located in Eritrea and northern Ethiopia, which existed during the 8th and 7th centuries BCE. With its capital at Yeha, the kingdom developed irrigation schemes, used plows, grew millet, and made iron tools and weapons. After the fall of Dʿmt in the 5th century BCE, the plateau came to be dominated by smaller successor kingdoms, until the rise of one of these kingdoms during the 1st century, the Aksumite Kingdom, which was able to reunite the area.[32]

The Kingdom of Aksum (also known as the Aksumite Empire) was an ancient state located in the Eritrean highlands and Ethiopian highlands, which thrived between the 1st and 7th centuries CE. A major player in the commerce between the Roman Empire and Ancient India, Aksum's rulers facilitated trade by minting their own currency. The state also established its hegemony over the declining Kingdom of Kush and regularly entered the politics of the kingdoms on the Arabian peninsula, eventually extending its rule over the region with the conquest of the Himyarite Kingdom. Under Ezana (fl. 320–360), the kingdom of Aksum became the first major empire to adopt Christianity, and was named by Mani as one of the four great powers of his time, along with Persia, Rome and China.

Northern Somalia was an important link in the Horn, connecting the region's commerce with the rest of the ancient world. Somali sailors and merchants were the main suppliers of frankincense, myrrh and spices, all of which were valuable luxuries to the Ancient Egyptians, Phoenicians, Mycenaeans, Babylonians and Romans.[33][34] The Romans consequently began to refer to the region as Regio Aromatica. In the classical era, several flourishing Somali city-states such as Opone, Mosylon and Malao also competed with the Sabaeans, Parthians and Axumites for the rich Indo-Greco-Roman trade.[35]

The birth of Islam

The birth of Islam opposite the Horn's Red Sea coast meant that local merchants and sailors living on the Arabian Peninsula gradually came under the influence of the new religion through their converted Arab Muslim trading partners. With the migration of Muslim families from the Islamic world to the Horn in the early centuries of Islam, and the peaceful conversion of the local population by Muslim scholars in the following centuries, the ancient city-states eventually transformed into Islamic Mogadishu, Berbera, Zeila, Barawa and Merka, which were part of the Barbara civilization.[36][37] The city of Mogadishu came to be known as the "City of Islam"[38] and controlled the East African gold trade for several centuries.[39]