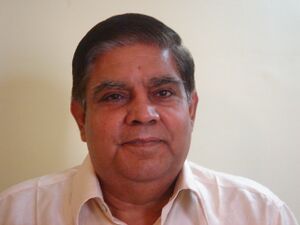 Jagdeep Dhankhar (जगदीप धनकड़) is a politician, an advocate and is serving as the 14th and current Vice President of India from 11 August 2022. Prior this position he served as the Governor of West Bengal. He also held office as the Union Minister for Parliamentary Affairs under the Chandra Shekhar ministry in 1990. He is a member of the Bharatiya Janata Party. He has also been a member of Janata Dal and Congress party in the past. He was a Senior Advocate at the Supreme Court of India, and member of Lok Sabha from 1989 to 1991. He is member, ICC International Court of Arbitration & Senior Advocate, Supreme Court of India.

He was born on 18 May 1951 at Kithana (किठाना) Village, Tehsil Chirawa District Jhunjhunu, Rajasthan in the Jat family of Chaudhary Gokul Chand Dhankhar and Kesari Devi. [1]

Dhankhar married Dr. Sudesh Dhankhar in 1979, and they have a daughter, Kamna.[4]

He lost the 1998 Indian general election from Jhunjhunu Lok Sabha constituency and came on third position.[8]

Jagdeep Dhankhar, who is a lawyer by profession, joined politics in 1989. He became the governor of West Bengal in July 2019 and has made headlines since then over his tumultuous relations with the Mamata Banerjee government.

The elections to the next Vice-President of India will be held on 6 August 2022. The announcement was made by the Election Commission of India. Article 56(1) of the Constitution of India provides that the Vice President of India shall remain in office for a period of five years and will be held on 6 August 2022. The winner of this election will replace incumbent Vice President Venkaiah Naidu. On 16 July 2022, Jagdeep Dhankhar the then serving Governor of West Bengal was nominated as a vice-presidential candidate by the BJP. The announcement was made by BJP chief JP Nadda following the party's parliamentary board meeting held in Delhi.[12]

The counting of votes for the vice-presidential election had begun at 6pm after 92.4 per cent of the members of Parliament cast their ballots.

Lok Sabha general secretariat Utpal K Singh said out of 780 votes, 725 cast their ballot and Dhankhar polled 528 votes, while Alva secured 182. There were 50 absentees and 15 votes were found invalid.

There were eight vacancies in Rajya Sabha - four from Jammu and Kashmir, three nominated and one from Tripura. There are 543 members in Lok Sabha and 237 in Rajya Sabha.

While the TMC did not participate in the election, only two lawmakers from the party. Shishir Adhikari and Debyandu Adhikari voted.

The counting started under the supervision of the Lok Sabha secretary general, who is the returning officer for the poll. As many as 725 MPs voted in the election, polling for which started at 10am and ended at 5pm.

The vice president of India, which is the second-highest constitutional post in the country, is elected through an electoral college consisting of members of the Rajya Sabha and the Lok Sabha.

On Wednesday, Telugu Desam Party (TDP) had announced its support for the NDA Dhankhar.

Opposition parties on July 17 decided to field former Rajasthan governor Alva as their joint candidate for the vice presidential election.

The decision to field Alva was taken at a meeting of Opposition leaders of 17 parties at the residence of NCP supremo Sharad Pawar.

In 2017, the NDA nominated Venkaiah Naidu as its candidate for the vice-presidential election and his term ends on August 10, 2022.