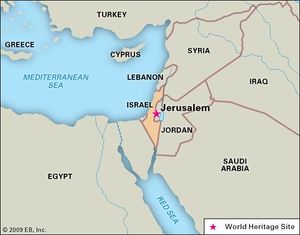 Jerusalem (;Hebrew: יְרוּשָׁלַיִם Arabic: القُدس‎‎ Hindi: यरुशलम) is a city located on a plateau in the Judaean Mountains between the Mediterranean Sea and the Dead Sea. One of the oldest cities in the world, Jerusalem was named as "Urusalima" on ancient Mesopotamian tablets, probably meaning "City of Shalem" after a Canaanite deity, during the early Canaanite period (approximately 2400 BCE). During the Israelite period, significant construction activity in Jerusalem began in the 9th century BCE, and in the 8th century the city developed into the religious and administrative center of the Kingdom of Judah. It is considered a holy city in the three major Abrahamic religions of Judaism, Christianity and Islam. 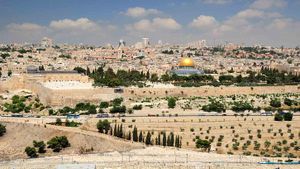 Despite a rapidly changing demography, Jerusalem has retained a diverse and cosmopolitan character, particularly in the walled Old City with its Armenian, Christian, Jewish, and Muslim quarters: Arabs in traditional and modern attire; Christians, Western and Oriental, in their infinite variety of secular garb and monastic vestments; Jews in casual and Orthodox dress; and hosts of tourists combine in colourful, kaleidoscopic patterns. Synagogues, churches, mosques, and dwellings in various styles make up the city’s unique architectural mosaic. Sunlight falling on the white and pink stone used for all construction gives even quite mundane buildings an aura of distinction. The scent of cooking and spices, the peal of church bells, the calls of muezzins from minarets, and the chanting of Jewish prayers at the Western (Wailing) Wall all add flavour to the life of the city. The absence of vehicular traffic within most of the Old City helps preserve its special character.

In recognition of its central place in the traditions and histories of numerous peoples, the Old City was designated a UNESCO World Heritage site in 1981. Yet outside the walls Jerusalem is in every sense a modern city, with its network of streets and transportation, high-rise buildings, supermarkets, businesses, schools, restaurants, and coffeehouses. The persistent mingling of Hebrew, Arabic, English, and other languages in the streets brings to mind the multicultural and political complexities of life in this revered city.