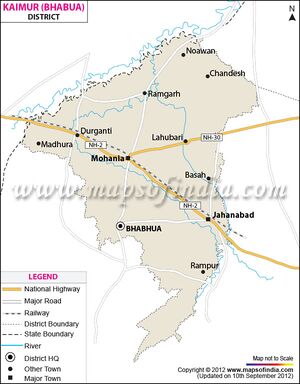 It is the westernmost district of Bihar, western point of Bihar called Chand is situated on the Bhabua-Chandauli road.

The Kaimur Range and Rohtas Plateau cover the southern part of this district.

Mundesvari Temple stands on the summit of an isolated hill about 603 feet high at village Ramgarh, seven miles south-west of Bhabua. Mundesvari temple is the earliest specimen of the Nagara type of temple architecture available in Bihar. It is unfortunate that, although a distinct style of temple architecture, known as the Nagara type, was evolved in Magadha with its centre at Pataliputra, specimens of it even in Bihar are very rare. This gives an added importance to the Mundesvari temple, although much of the structure has crumbled down. From the point of view of the age of temples, this is the oldest in Bihar. An inscription in two broken pieces was found and has been interpreted by some, as discussed later, to identify the origin of the temple to the year 635 A.D. The inscription refers to Udayasena as the ruling chief and records various donations to Mandalesvara.

There is clear impress of the Gupta style on the carvings. In the centre is a Siva Linga, with four human faces on the phallus. The image called Mundesvari, or the goddess Munda, is an armed female having many hands and riding on a buffalo: it probably represents the wife of Mahisasur, a celebrated antagonist of Parvati the hair and ears evidently resemble those of the Buddhas: it is placed in the door, behind which is a small cavity without any external opening.

It is very fortunate that Francis Buchanan, in his account of the District of Shahabad in 1812-13, has left a description of the Mundesvari temple and the tradition associated with it. Buchanan's account is of particular importance because of the tradition that was mentioned to him regarding the temple. It is as follows:

"There was a certain Munda, whom people pretty generally call a Chero Raja; but the pandit of the survey says that he was a Daitya, who had a brother named Chanda, and both lived in the golden age. These brothers who, according to the Markandeya Purana, were the chief military officers (senaptis) of Sumbha and Nisumbha, two great infidel (Daitya) kings, were killed by Parvati, who on that account is called Chamunda, a title, it is said, composed of the two infidels' names.

It is further said that the proper name of Chayanpur is Chanupur derived from one of the brothers who resided there, while a small temple named Mundesvari, and situated on a hill about five miles east from Chayanpur, was built by the Daitya Munda. If there is any foundation for the Puranic legend, it may refer to some exploits in the Indian warfare of Semiramis; but from the appearance of the ruins I have little doubt not only of the truth of the common report of Munda Raja having been a Chero but that he was some small chief, who retained a dependent principality long after his nation had ceased to possess the imperial dignity.

The town where Munda resided is called Garohat, and was situated on the banks of the Katane, just in the eastern mouth of a valley formed between the great mass and the detached range of hills west from Bhagwanpur. The whole of this valley was originally called Mukeri Kho; but that name has of late been restricted to a large recess towards its east end, down which the Katane flows.

The situation was judicially chosen for the residence of a person such as I suppose Munda to have been; as it is not only in a very rich country, but has behind it recesses in the mountains that are capable of defence by a small force; and even in case of defeat, the mountains afford a secure means of escape...."

This inscription, was discovered among the debris which had accumulated around the temple of Mundesvari (मुण्डेश्वरी) in the Bhabua subdivision of the Shahabad district. The inscription was finally brought to the Indian Museum in the beginning of 1904.

The inscription records a grant of two prasthas of rice and a pala of oil to the god Mandaleshwara by a kulapati named Bhāgudalana. It is dated in the year 30 in the reign of the Mahasamanta, Mahapratihara, Maharaja, Udayasena, who is not known from other sources.

Judging from, the affinity of the characters of this inscription with those of the years 34 and 39 from Nepal, 6th era is most probably that established by Harshavardhana.

Hail. In the year 30, on the twenty-second day of Karttika, the the above mentioned year, month and day, in the reign of the great feudatory, the Mahapratihara the Maharaja [Uda]yasena, the Kulapati Bhagudalana, having applied to the Council of gods through the dandanayaka Gomibhaṭa built this maṭha of the davakula of Narayana, to increase the merit of his father and mother and of his own self, near the temple of Vintesvara. For the lord Mandalesvara provision has been made every day, as long as the Sun and Moon last everlastingly, to provide two prasthas of rice for the votive offering a pala of oil for the lamp from the treasury. Fifty dinaras current up to the frontiers.... of the Lord Mandalevara- ..... wit h rice and other ingredients. Knowing it to be a gift of council of gods, the merchants who trade on the waters(?) and who arrive on the proper time should not hinder this arrangement. Having heard this, whoever contrary shall live in hell with great sins .... O! Yudhishthira, presrve with care ....... preservation is preferable to gifts.