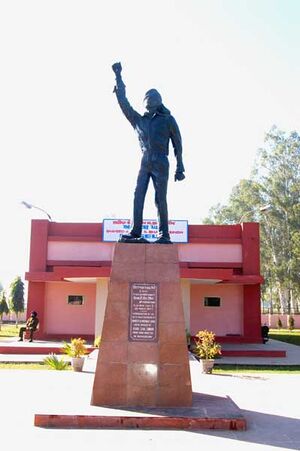 Khatkar Kalan or Khatkarkalan (खटकड़ कलां) is a village in Nawanshahr, earlier Jalandhar district in Punjab. The name indicates it was founded by Khatkar gotra Jats. Its PIN Code is 126115.

The ancestral home of Shaheed Bhagat Singh at Khatkar Kalan has been declared as protected monument by the Government of India. [1]

KHATKAR KALAN is a historical village which has got the honour of being the birth place of the famous patriots and freedom fighters like Sardar Kishan Singh, Sardar Ajit Singh, Sardar Swaran Singh, Shaheed-e-Azam Sardar Bhagat Singh.

In the memories of Sardar Ajit Singh, when he came home after imprisonment of 40 years, are reproduced here as he expressed them in his writing. "My Village Khatkar Kalan comes under station Banga. This village is well known because of its special features."

"One of my forefathers started from his village "Narli" in Lahore District during Mughal period to go to "Haridwar". His purpose to go there because he was to throw the ashes of someone from his family member in river "Ganga". The journey was long. In his way he took shelter in a fortress. The owner of the fortress was a kind hearted person. He welcomed that stranger. He was a young person. He also invited him to have meals with him and his family. The owner had a wife and a beautiful daughter. When they were eating food the young man and the daughter of the owner of the fortress got attracted towards each other. The girl expressed her desire to marry the man. Her parent had also selected the person as their would be Son-In-Law. Next morning when the young man was about to go the owner asked him if he was married. The young man said to him "Not yet.". At this the owner of the fortress invited him to be his guest for the second time. He bade Good Bye to them and started his journey again.

Thus from their couple started one family. Time changed and the walls for the fortress fell down. During rainy season the deep dug places around the fortress changed into pools. Today people have great benefits of these pools and they use these pools for bathing and other places."[3]

Khatkar Kalan, a village on the Chandigarh-Jalandhar highway in Punjab's Doaba region, today typifies development not because of affluent NRIs but because it is the birth place of Shaheed Bhagat Singh and 2007 happens to be the hundredth year of his birth. Centre has sanctioned a grant of Rs 1 crore for the maintenance of Singh's 150-year-old ancestral house and beautification of the surrounding area, the state Government has given an equal amount for other development works in the village. A library has been built at the village square and also a 200-kW solar power plant to meet the growing demands of energy in the village. Even though Khatkar Kalan boasts of four government-run schools, Chief Minister Parkash Singh Badal recently laid the foundation stone for another Adarsh School to provide quality education to the poor and the needy. To attract tourists, a Rs 52-lakh fast food complex is under construction near Shaheed Bhagat Singh Museum.[4]

Notable persons from this village