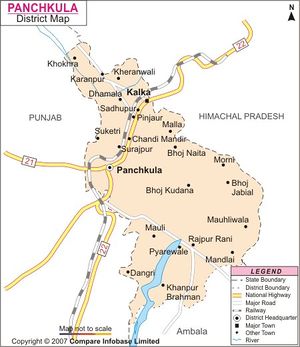 Pinjore (पिंजौर) is a town in Panchkula district in the Indian state of Haryana. Pinjore Garden is situated in Pinjore (Haryana).

The place was known as Panchpura or Panchapura (पंचपुर) in ancient times, which later on changed to Pinjore. The five Pandavas had lived here during Mahabharata period. [1] [2]

Pinjore is known globally for the Mughal Gardens and the HMT factory. Since H M T (Hindustan Machine Tools) factory for Tractors is located here and many ancillary units have also come up.

Pinjore is a small, secure residential 'township' with easy access to the extraordinary educational, cultural and recreational opportunities of Chandigarh - one of India's most desirable places to live. Set over 1800 feet above the sea level in a beautiful valley, overlooking the Shivaliks, it is a pollution-free area away from the madding crowd of the cities, which offers perfect setting not only for physical well-being but also for the harmonious development of mind and spirit.

The foothills of Shivalik have lured men to strive for greater heights and to the shimmering snow covered peaks. Shivaliks mark the beginning of the most spectacular and glorious mountains, beckoning the travelers to continue their journey tirelessly upwards. DPS Pinjore, taking this inspiration from the majestic Himalayas, facilitates its students to strive for the alluring heights of excellence in academics career and life.

The lure of Himalayas is as old as the first human being to behold their majesty. For the people of the Indian sub- continent, the Himalayas have always been more than a mere geographical entity. We have associated these mountains with our Gods and our legends, served our philosophy of life through the minds of men who went through the Himalayan experience while reaching out for universal truths of creation.

The average temperatures for summers and winters are 35 and 18 degree Celsius respectively, with rainfall concentrated over the summer months of July, August and September.

According to the Hindu mythology,the place is associated with Mahabharata as the five Pandavas are believed to have stayed here during their exile for one year i.e. their 13th year in order to hide from Duryodhan. It is a local saying that every day pandav used to dig a kund for generation of water. Some of the kunds such as Draupadi kund, Dhara Mandal etc. which are also called baolis in local language, are still available. In the month of April, a large number of people gather here to celebrate Baisakhi Utsav and these pilgrims take a dip in the holy water of Dhara Mandal and other baolis. The place was then known as Panchpura, later on named Pinjore.

Chauhan history reveals that Prithviraja II had defeated the chief of Panchapura, probably Pinjore, a very old town near Kalka. The ruler of Panchapura saved his kingdom by surrendering a valuable pearl necklace and offering homage to Chauhan rulers. [3]

Important sculptures and other antiquarian remains recovered from the place can be assigned to the period ranging between 9th century A.D. to 12th century A.D. This site, according to other legends, had an ancient garden in around 1030 A.D. that was subsequently destroyed by the legendary Timur (1336-1405), the Mongol conqueror. Despite repeated conquests, to the locals this region represents religious unity with a Hindu temple, Sikh gurudwara and Islamic mosque continuing for several centuries in peaceful co-existence within one km of each other and the Mughal gardens. It is believed that the ancient temple was built by the Pandavas. The gurudwara was built here in 1474 when the head of the Sikh religion, Guru Nanak stayed here for a short period and the mosque has been here for over four hundred years from the time the Mughal emperor Jehangir stopped here after winning a battle.