Location of Rajor in Alwar District

This place in ancient times was known as Rajyapura (राज्यपुर), Paranagara (पारानगर) (Parshvanagara), Nilakantha (नीलकण्ठ) etc. Nilakantha is name derived from celebrated Nilakantheshvara Shiva temple. Jaina sources prove its close association with Jainism. A 10th century Inscription records installation of an image of Shantinatha at Rajyapura in V.S. 979. in the temple of Tirthankara in the reign of King named Savata. The temple was constructed by Jaina architect Sarvadeva, son of Deddulaka and grandson of Arbhata of the Dharakatta family hailing from Purnatallaka. (See Indian Archaeology - A Review 1961-62,p.85) [1] 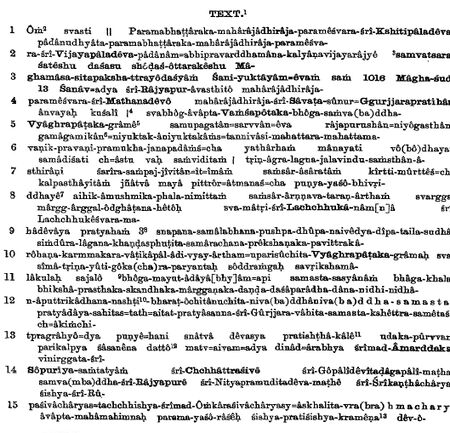 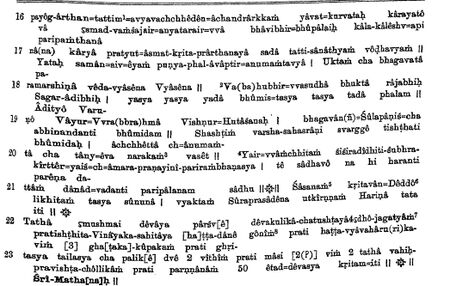 The stone which bears this inscription was found, about eighteen yeara ago Near the temple of Nilatantka Mahadeva among the ruins of the city of Pāranagar which are to the south of the village of Rajor or Rajorgadh on a lofty range of hills in the Rajgadh district of the Alwar State in Rajputana about 28 miles south-west of the town of Alwar and is mow preserved at Alwar itself.

The inscription contains 23 lines of writing which covers a space of about 1'5" broad by 1' 3-1/4" high, and is nearly throughout in a perfect state of preservation. The letters closely resemble those of Harshanatha inscription of Vigraharaja published with a photo-Lithograph in the Epigraphia Indica Vol II. p- 116ff.

The inscription in Lines 1-3 refers, itself to the reign of the Paramabhattaraka Maharajadhiraja Parameshwara Vijayapaladeva who, meditated on the feet of the Paramabhattaraka Maharajadhiraja Parameshwara, the illustrious Kshtipaladeva ; and is dated, in words and figures, on Saturday the 10th of the bright half of of the Magha of year 1016. On this day the Maharajadhiraja Parameshwara the illustrious Mathanadeva, of the Gurjarapratihara lineage, and a son of the Maharajadhiraja, the industrious Sāvaṭa residing at Rajyapura, (Lines 3-13) informs his officials, the gamāgamikas and others, and the mahattaras mahattamas merchants, pravanis and other inhabitants of the village of Vyāghrapāṭaka pertaining to the Vamshpotaka bhoga which Mathanadeva held possession of, that on the occasion of the installation (of the image, or the consecration of the temple) of the god Lachchhukeshara Mahadeva (Siva), so named after his mother Lachchhukā, he has granted to the god (or his temple) the village of Vyāghrapaṭaka up to its proper boundaries, the grass and pasture land with the udaranga , with its rows of trees, -with its water, with the bhoga and mayuta income, with all customary and not customary, fixed and not fixed receipts, the shares of all sorts of grain, the khala-bhikshā, prasthaka, skandhaka, mārganaka, the fines, ten offences, gifts, treasures and deposits, the aputrikadhana and nashṭibharaṭa and together with all neighbouring fields, cultivated by the Gurjaras, for the purpose of defraying the expenses of bathing (the god) three times a day, of unguents, flowers, incense, naivedya offering, lights and oil, of applying white-wash and red lead, of repairing what may become damaged or broken, of public shows and putting on the sacred thread and of paying labourers, gardeners, etc. Lines 13-15 show that the administration of this grant, in the first instance, was entrusted to the holy ascetic Omkarashivacharya (a disciple of Rupasivacharya, who again was a disciple of Srikanthacharya), a member of the Sopuriya line or school (of devotees) started at Āmardaka and inmate of the Nityapramuditadeva maṭha at Rajyapura f which was connected with the Gopaladevitadāgapali matha at Chhattrasiva. And the donor (in lines 13-17) exhorts his successors not to obstruct, but rather always to assist the ascetic's disciples and disciples' disciples in the management of the property for the benefit of the god (or his temple). Lines 18-20 quote four of the customary benedictive and imprecatory verses ; and the main part of the inscription ends, in- line 21, with another one, according to which this charter (sāsana) was composed by Dedda, written by his son Suraprasāda, and engraved by Hari.

Lines 22-23 then record certain additional taxes or tolls., the proceeds of which were to be made over to the same deity (or temple) jointly with the god Vināyaka (Ganesha, whose image or shrine was) set up in the lower grounds adjoining four chapels on one side (of the temple of Lachchhukeshwara). So far as I understand this passage, these taxes were three vimsopakas, as customary in the market, on every sack (of agricultural produce) brought for sale to the market; two palikās from every ghataka-kupaka of clarified butter and oil, two per mensem for every shop ; and fifty leaves from very chollika (of leaves) brought from outside the town. The inscription concludes with the words 'the illustrious Mathana, representing the signature of the donor.

In the Indian Antiquary, Vol. XIX. p 23, I have already had occasion to show that the date of this inscription, for the expired Vikrama year 1016, corresponds to Saturday, the 14 January, A.D. 960. This date enables us to prove, -with a fair amount of certainty, that the sovereign Vijayapaladeva to whose reign the inscription professes to belong, was a King of Kannauj. In the Epigraphia Indicia, Vol. II. p. 235, I have attempted to show that the three kings Vijayapaladeva, Rajyapaladeva and Trilochanapaladeva, who are mentioned in the Bengal Asiatic Society's plate of Trilochanapala, edited by me in the Indian Antiquary, Vol. XVIII. p. 33 ff were rulers of Kanauj ; and as that plate, for Trilohanapaladeva, gives us a date corresponding to the 26th June, AD 1027, there would, so far as regards the two dates, be no objection to identifying the Vijayapaladeva of the plate with the Vijayapaladeva of the present inscription (of the year A.D. 960). And such an identification is supported by the fact that the Vijayapaladeva of this inscription is here stated to have been preceded by Kshitipaladeva. For we know that a king of this name, also called Mahipala and Herambapala, was actually ruling at Kannauj in A.D. 917-18, forty-two years before the date of our inscription. It is true that, according to the large Siyadoni inscription, Kshitipaladva of Kanauj in AD 948 had been succeeded (not by Vijayapaladeva, but) by Devapaladeva ; but this would seem to be no very formidable objection to the proposed identification. For it might either be said that Vijayapaladeva was a younger brother of Devapaladeva, in which case the omission of the elder brother's name from the preseut inscription would note be without precedence ; or we might assume that Devapaladeva and Vijayapaladeva are two names of one and the same King, an assumption in favour of which it might be urged that each of the three predecessors of Devapaladeva Bhoja, Mahendrapala, and Kshitipala also bore each at least one other name. For the present, then, I do identify the Kshitipaladva and Vijayapaladeva of this inscription with the sovereigns of the same names, known to us from the Siyadoni inscription and the plate of Trilochanapala ; and consider the Maharajadhiraja Paramesvara Mathanadeva, who made the grant here recorded, to have been a feudatory or subordinate of the kings of Kanauj. Of this Mathanadeva and his predecessor Savaṭa nothing is known to me from other inscriptions ; and I have not found elsewhere any mention of the Gurjara-pratihara clan or family, to which they are stated to have belonged. The clan perhaps is identical with the Vadagujara-vansha (Badgujar) mentioned in line 8 of an inscription at Māchāḍi, of, Vikrama- Samvat 1439, of which a rough photo-lithograph was published in the Archaeological Survey of India, Vol. VI Plate xi.

Of the localities mentioned, Rajyapura, apparently Mathanadeva's capital, is of course Rajor or Rajorgadh or rather Pāranagar, close to the modern village of Rajor, where the inscription has been found ; and the village of Vyāghrapaṭaka is said to exist still, near Rajor, under the name of Bāghor. The place Vamsapotaka which gave the name to the bhoga or district to which the Tillage belonged, I am unable to identify. Nor can I Identify the places Amardaka (?) and Chhāttarasiva (?), which are mentioned in connection with the ascetics to whom the management of the grant was entrusted Chhattrasiva ought to be looked for in the neighbourhoodof Rajor; and ihe name Amardaka, I have previously found in the word Amardakatirtha-nāthas the name or an epithet of a Saiva ascetic who is mentioned in the inscription from Ranod (Narod), published by me in the Epigraphia Indica, Vol. I. p. 351 ff.