Note - Please click → Sardarpura for details of similarly named villages at other places. 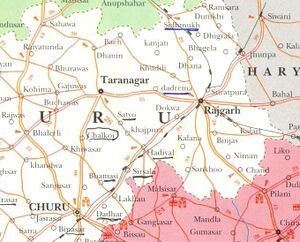 Location of Rajgarh in Churu district

Sardarpura (सरदारपुरा) is a small village in tehsil Rajgarh of Churu district in Rajasthan. It is situated at last corner of the district.

All the Jats are Pachar descended from single ancestor Raja Ram Pachar. They had come from nearby village Bhangarh about 130 years back, who had to leave that place due to differences with Rajput Jagirdar. Sidhmukh Thakur gave Raja Ram a land of 2500 bigha for establishment of a new village. Bikaner Maharaja Dungar Singh gave a patta in the name of ‘Thakur Sardar Singh’, hence the name Sardarpura. [1]