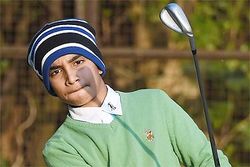 Shubham Jaglan (शुभम जगलान) is an Indian amateur golfer who is the winner of the Junior World Golf Championships in 2015. Jaglan is also World Record holder, 9 under in Classic Junior Open, 2012 and is recipient of the "NDTV – Emerging Player" and "Margdarshan" awards. Shubham has won over 100 domestic and international tournaments.

Shubham Jaglan was born in village Israna, Panipat district, Haryana born in hindu jat family. His father is a milkman by profession and his family practices Pehlwani (wrestling). He is receiving his primary education in his village.

A NRI named Kapur Singh started a Golf academy in Shubham's village (Israna). Shubham Jaglan was enrolled into the academy by his grandfather. Against the wishes of his family and despite the academy shutting down, Shubham continued his practice on a small piece of land in his backyard. This land was cleaned by his father and converted into a green with three holes. Most of Shubham's formative training was "self-taught", from YouTube.

He was later spotted by Delhi Golf Foundation that gave him annual scholarship of INR 2.0 lakh and a membership in the Delhi Golf Club, which in turn helped the father & son to relocate to Delhi to continue his training.

Prodigy Shubham Jaglan, the 10-year-old son of a milkman from hinterland Haryana, swung his way to the IJGA World Stars of Junior Golf crown in Las Vegas, winning by a handsome five-stroke margin. Last week, he had clinched the IMG Academy junior world championship for the 9-10 age category in San Diego.[1]