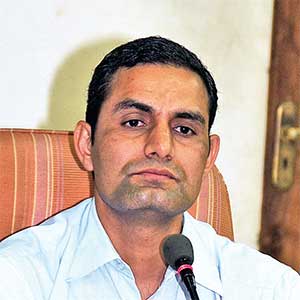 Vijay Nehra (विजय नेहरा) is IAS Gujarat cadre (IAS 2001 batch). He is originally from Sikar district in Rajasthan. He has been collector Vadodara and collector Ahmedabad. He is presently Joint Secretary in the Chief Minister’s Office Gujarat.

When he was posted as the Vadodara Collector, the Gujarat government conferred upon him the Best Collector award in 2009 for bringing 12,000 senior citizens under the Indira Gandhi National Old Age Pension Scheme. [1]

Vijay Nehra is no ordinary IAS. He comes from a very modest Jat family of Sikar district in Rajasthan. He is son of an army Jawan. He got the benefit of an education scheme for poor as a result of which he could get education in a public school at the expense of the Government. He is known for his razor-sharp efficiency, transparency and messianic zeal in implementing developmental schemes. He remained Collector Vidodara for three years and left charge 4 years ago and became collector Ahmedabad. In CM's office Nehra has implemented much bigger task than he did as a district collector. [2]

While undergoing training at Lal Bahadur Shastri National Academy of Administration Mussoorie He got Director's Gold Medal for Highest marks in "Management and Behavioral Science" and "Law".[3]

The award comes in the wake of proactive role played by him during 2008-2009 for propagating and bringing forth nearly 12,000 senior citizens under Indira Gandhi National Old Age Pension Scheme. Nehra created a sort of history by securing first place in the country in implementation of the scheme. He was also awarded for streamlining the core revenue administration and speedy and effective promulgation of land records.

Nehra, during the corresponding year, also did a remarkable job by covering as many as 7,000 poorest of the poor people under Antyodaya Scheme as against the target of 8,000 people for entire Gujarat.

He also plugged the loopholes in Public Distribution System (PDS) and got cancelled as many as 45,000 fake ration cards in the district. He also got cancelled the kerosene quota going illegally to 55,000 consumers already utilizing Liquefied Petroleum Gas (LPG) as their domestic fuel supply by stamping on ration cards.[4]

Ahmedabad District Collector Vijay Nehra was transferred in April 2013 and appointed Joint Secretary (Law and Order) in the Home Department. He holds the additional charge of Joint Secretary in the Chief Minister’s Office (CMO). [5]

The junior most IAS in the CMO is Vijay Nehra. The 2001 batch IAS officer was posted as Ahmedabad district collector till last year. He was then transferred as the joint secretary (law and order) in the Home Department with additional charge of joint secretary at Modi's office.

Later, his position was re-designated as additional secretary to the government in the CMO. Nehra, who reportedly share good rapport with Modi's trusted lieutenant Anandi Patel, is being groomed for more important roles, the report says.[6]