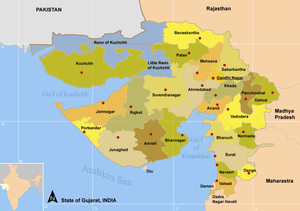 Gujarat (Hindi: गुजरात, Gujarati: ગુજરાત) is the second-most industrialized state in the India (after Maharashtra).

Gujarat borders Pakistan, and the states of Rajasthan to the north-east, Madhya Pradesh to the east, Maharashtra and the Union territories of Diu, Daman, Dadra and Nagar Haveli to the south.

Alexander Cunningham[1] writes....During all these transactions Ferishta invariably designates the peninsula, as well as the country to the north of it, by the modern name of Gujarat. The name is not mentioned by Abu Rihan, although he notices both Analwara and Somnath. It occurs first in the Mojmal-ut-tawarikh of Rashid-ud-din, who wrote in A.D. 1310, just thirteen years after the conquest of the country by the Muhammadan king of Delhi. Now I have already shown that the name of Gurjjara was confined to Western Rajasthan in the

[p.321]: time of Hwen Thsang, and that it was still a distinct country from Saurashtra in A.D. 812, when Karka Raja of Lateshwara recorded his grant of land. Between this date and A.D. 1310, there is a gap of five centuries, during which period we have no mention of Gurjjara in any contemporary records.

I have a strong suspicion, however, that the movement of the Gujars towards the peninsula must have been connected with the permanent conquest of Delhi, Kanoj and Ajmer by the Muhammadans, which ejected the Chohans and Rathors from Northern Rajasthan and the Upper Ganges, and thrust them towards the south.

We know that the Rathors occupied Pali to the east of Balmer in the Samvat year 1283, or A.D., 1220. This settlement of the Rathors must have driven the great body of the Gujars from their ancient seats and forced them to the south towards Anhalwara Pattan and Eder. This was actually the case of the Gohils, who, being expelled from Marwar by the Rathors, settled in the eastern side of the peninsula, which was named after them Gohilwara.

In the time of Akbar the Gujars had certainly not penetrated into the peninsula, as Abul Fazl does not name them in his notice of the different tribes which then occupied the Sirkar of Surat. But even at the present day there is no large community of Gujars in the peninsula, so that we must look for some other cause for the imposition of their name on a large province which they have never completely occupied.

In my account of the province of Gurjjara I have already noticed an old inscription of the kings of the Gurjjara tribe. From this record we learn that in s. 380, or A.D. 458 the Gujars had pushed their conquests

[p.322]: as far south as the banks of the Narbada. In that year, and subsequently in A.D. 463, their king Sri Datta Kusali[2] made several grants of land to certain Brahmans in the district of Akrureswara, near Jambusara, which I take to be Akalesar, on the south bank of the Narbada, opposite Bharoch. But before S. 394, or A.D. 472, the Gujars must have been driven back to the north, as far at least as Khambay, as the Chalukya prince Vijaya made several grants of land to the same Brahmans in the town of Jambusara, which lies between Bharoch and Khambay. It is certain, therefore, that the Gujars had occupied the country to the north of the peninsula as early as the fifth century of the Christian era. But two centuries later they had already lost their power, as Hwen Thsang found a Kshatriya prince on the throne of Gurjjara. They must still, however, have Continued to form the bulk of the population of the countries to the west and south of Mount Abu ; and as Alaf Khan, the first Muhammadan conqueror, under Ala-ud-din Khilji, fixed his head-quarters at Naharwara, or Analwara, in the very heart of the Gujar country, I think it probable that the name of Gujarat was then first applied to this new province of the Delhi empire ; and as the peninsula of Saurashtra formed a part of the province, it was also included under the same general appellation. I therefore look upon the extension of the name of Gujarat to the peninsula as a political convenience rather than an ethnographical application. Hamilton[3] notes that the greater part of Malwa and Khandes was formerly called Gujarat; and this is borne out by

[p.323]: Marco Polo, who distinguishes between the peninsula, which he calls Sumenat (Somnath) and the kingdom of Gozurat, which he places on the coast to the north of Tana ; that is, about Bharoch and Surat. Even at the present day the name of Gujarat is not known to the natives of the peninsula itself, who continue to call their country Sarat and Kathiawar;[4] the latter name having been a recent adoption of the Mahrattas.

Many settlements of the Indus Valley Civilization, also known as the Harappan Civilization, have been found in Gujarat. The most important of these are the trade port of Lothal in south eastern Gujarat and Dholavira in western Gujarat.

The name of the state is derived from Gujjarātta (Gurjar Rāshtra), which means the land of the Gujjars. It is believed that a tribe of Gujjars migrated to India around the 5th century. Gujarat's coastal cities, chiefly Bharuch, served as ports and trading centres for the Maurya and Gupta empires. After the collapse of the Gupta Empire in the 6th century, Gujarat flourished as an independent Kingdom.

The Maitraka dynasty, descended from a Gupta general, ruled from the 6th to the 8th centuries from their capital at Vallabhi, although they were ruled briefly by Harshavardhana during the 7th century.

In 775 the first Parsi (Zoroastrian) refugees arrived in Gujarat from Iran.

The Arab rulers of Sindh sacked Vallabhi in 770, bringing the Maitraka dynasty to an end.

A branch of the Pratihara clan ruled Gujarat after the eighth century.

Click the link below to know details about places of historical importance:

Ethnically there are four groups of people who came to inhabit this land at different points of time and now form the majority here. These are Jats, Ahirs, Rabaris and Harijans. The Jats came from a place in Iran called Half (to be known latter as Jat) and they were herders by occupation. Around five hundred years ago they came to Kutch and Sind in search of new grazing pastures and settled there. Those who joined agriculture called themselves Garasia Jats and those who continued their ancestral occupation were known as Dhanetah Jats, and those who chose to study the Koran became Fakirani Jats. [5]

Kachchha-desa in Gujarat is also known Jartra–desa, the modern Kutch.[6]

The Jats of Kutch are a cattle breeding nomadic Muslim community. They are one of a number of communities of Maldhari pastoral nomads found in the Banni Grasslands Reserve region of Kutch.[7]

The Jat, or Jath in Kutch claim descent from Hindu Jats of the Indus delta region of Sindh, in Pakistan, where a good members of the tribe still reside. Those who remain in Sindh are referred to as the Sindhi Jats. From there, they moved into the Bani region in search of pastorage. With the partition of India, the Jats of Kutch have lost all contact with their kinsmen in Sindh. They appear to be distinct from the Jat community of North India and Pakistan.[8]

The Jats are a Maldhari cattle herding group, and are mainly distributed in Kutch and Saurashtra region. They have three territorial divisions, the Halai Jat (found in Jamnagar and Porbandar), Verai Jat (Banaskantha District), and Kutchi Jat (found in Kutch District). The Kutchi are further subdivided into the Dhanetah, Girasia and Fakirani, the latter consider themselves superior to the other two, and are strictly endogenous. They are further divided into clans like the Badajang, Podani, Aamar, Vangayi, while the Girasia are divided into the Mudrag, Bhallad and Hallayi. All these clans, except the Fakirani, enjoy equal status. The Saurashtra Jat, known as Malaks, maintain a system of Gotra exogamy.[9]

In addition to cattle rearing, the community are also involved in the breeding of camels, especially the Fakirani. A good many of the Saurashtra community are small scale peasant farmers. A few are landless, and work in as agricultural labourers. The Kutch Jat are also known for their embroidery work.

The Jats of Gujarat have many similarities with those of Haryana, Punjab, and Rajasthan. A few villages in Gujarat were Jats live are Rampura, Motidhani, Nani Dhani etc. These villages are near about Deesa (Dist Banas Kantha) and Palanpur and the gotras found there are Jakhar, Jyani, Godara, Lunayach, Tada, Siyol, Bhari, Nain, Dhaka etc.

The Jats of Gujarat are wealthy and landlords. The Banaskantha district has many Jat villages where a sizable population lives. The Jat population of these villages is about about 30000. These villages are near about national highway 15 and 8. [10]

Gujarat state has a sizable Hindu Jat population. There are about 3000 families dwelling in Ahmedabad. 60 % of these people are engaged in Industrial works, such as Mills, Factories and shops. 20 % are in middle level jobs or small-scale industries. Balance 20 % are either in higher-level jobs are middle level Industries. Some Jat families are mill owners also. [11]

Note: - The above list comparing the Gotras is based on VP Desai’s book “Bharat ke chaudhary” (Bharatna Anjana). VP Desai has mentioned that this caste had done great struggle for the freedom of India and they ruled India for about ten centuries democratically. [13]

Vapi (वापी) ,Gujarati: વાપી, is a city and a municipality in Valsad district inGujarat. It is situated on the banks of Damanganga River in southern Gujarat, India. Vapi falls under the taluka administration of Pardi. The industrial township of Vapi holds its place of importance on the "industrial" map and it is the largest industrial area in Asia in terms of small-scale industries, dominated by chemical industry plants.

The goal of Gujarat Jat Samaj Vikash Parisad (Vapi) is to unite all Jats under one roof and to promote and preserve our culture, heritage, language, social and cultural awareness and respect of Jatsamaj, India by providing a platform to Jat community while serving the community needs.

The activities developed steadily through the past 12 years and have culminated in a strong and vibrant Jats cultural organization. The foundation of our Samaj is strong due to the hard work and dedication of our past and present Executive Committee and Board of Trustee leaders, volunteers, as well as the ongoing support from our community. The commitment of its strong cohesive membership has never looked back.

Today, our goal remains to increase our membership, invest in the next generation--our youth, and to build a central location for Samaj to provide resources to our community……from our children to our senior citizens.

Jats in Valsad district are:

This organization is working in Surat district. Some notable persons in Surat are[15]: