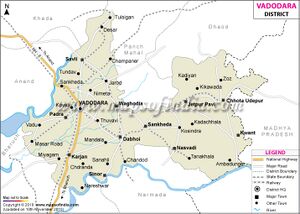 It is located on the banks of the Vishwamitri River, southeast of Ahmedabad, 139 kms from the state capital Gandhinagar. The railway line and NH 8 that connect Delhi and Mumbai pass through Vadodara.

The other kings of the West or Lada will be servants of the subjects [T.; S. 'will be crown-less' ("head-less", mūrdhānta)]. Their own earlier families will be rulers after Śīla. They will be mariners, sailing beyond the sea to Sura (T., Sura= Assyria; S. 'going to Persia,' Parshagāh) (605). At Vāravatī there will be Indra, Suchandra, Dhanu, (and) Ketu, with the style Pushpa. Having occupied Valabhi, there will be the first king and his numerous successors with the names Prabha and Vishnu: the numerous kings will be Yadavas (606-8). The last (T.) amongst them will have the name Vishnu whose 'capital with its citizens and the king himself was washed away by the sea owing to the curse of the Rishi. The Varavatyas (T.; S. Dvaravatyas) then disappeared and sunk in the sea (609).

The Varavatyas were Yadavas as mentioned at p. 604 (verse 324) Yātavā Vārayatyāś (cha) . The Varavatyas seem to be noted in the Paikuli Sassanian inscription in Asuristan in the form of Boraspacin whose chief was Mitra al-Sen in 294 A.D. (JJBORS., XIX) . It is noted in the AMMK that from the sea the Valabhi (Kathiawar) people used to cross over to Sura, which refers to their trade ventures to and regular commerce with Assyria. The port Śūrapāraka (Sopārā) acquired that name for being the port of embarkation for Assyria.

The rulers noted by name are post-Siladitya, though their families had existed from before. The washing away of Varavati seems to have taken place towards the end of the seventh century. They according

An Imperial History Of India:End of page 25

to the AMMK occupied Valabhi, probably in the 7th century. The Varavatyas are expressly described as belonging to the family from which Siladitya descended; the Varavatyas represented the earlier stock tesām cha purvajā-Vaṃśāh Śīlahvoparate tadā. The Maitrakas thus were a branch of the Yadavas. --- The first recorded history of the city is that of the early trader settlers who settled in the region in 812 AD. Alexander Cunningham[3] writes about a copper-plate inscription of A.D. 812 found at Baroda.[4] In this record of the Saurashtra kings, Gurjjara is twice mentioned as an independent kingdom.

[p.317]: The ruins of the famous city of Balabhi were dis-covered by Tod near Bhaonagar, on the eastern side of the peninsula of Gujarat. In an inscription of the fifth century the country is called " the beautiful kingdom of Valabhadra,"[6] but in the local histories and traditions of the people, it is generally known as Balabhi. This also was the name in the time of Hwen Thsang, who calls the kingdom Fa-la-pi, or Balabhi. In ancient times, however, the peninsula of Gujarat was only known as Surashtra, and under this name it is mentioned in the Mahabharata and in the Puranas. It is called Surashtrene by Ptolemy and the author of the ' Periplus ;' and its people are most probably intended by Pliny under the corrupt name of Suarataratae, or Varetatae, for which I would propose to read Suratae.

The change in the name of the country is alluded to in an inscription, dated in the Saka year 734, or A.D. 812, of Raja Karka, whose remote ancestor Govinda is said to have been the ornament of the Saurashtra kingdom, " which lost its appellation of Sau-rajya from the ruin that had fallen upon it."[7] Karka's father is called Raja of Lateswara, which at once identifies his kingdom with Balabhi, as Hwen Thsang notes that Balabhi was also called Pe-Lo-lo, or northern Lara, which is the common pronunciation of the Sanskrit Lata. As Karka was only the fifth in descent from Govinda, the name of Saurajya or Saurashtra could not have been restored by these representatives of the old family before the middle of the seventh century. From a comparison of all the data I conclude that the old name of Saurashtra was lost in A.D. 319, when the successors of the Sah kings were sup-

[p.318]: planted by the Vallabhas, and the capital changed from Junagarh to Valabhi. The establishment of the Balabhi era, which dates from A.D. 319, is said by Abu Rihan to mark the period of the extinction of the Gupta race, whose coins are found in considerable numbers in Gujarat. This date may therefore be accepted with some certainty as that of the establishment of the Balabhi dynasty, and most probably also as that of the foundation of their city of Balabhi.

According to the native histories and local traditions Balabhi was attacked and destroyed in the Samvat year 580, which is equivalent to A.D. 523, if in the Vikrama era, or A.D. 658, if in the Saka era. Colonel Tod has adopted the former; but as Hwen Thsang visited Balabhi in A.D. 640, the date must clearly be referred to the later era of Saka. If the statement is correct, we may refer the capture of Balabhi to Raja Govinda of the Baroda copper-plate inscription, who is recorded to have re-established the old family, as well as the old name of the former kingdom of Saurashtra. As he was the great-grandfather of the grandfather of Karka Raja, who was reigning in A.D. 812, his own accession must have taken place in the third quarter of the seventh century, that is, between A.D. 650 and 675, which agrees with the actual date of A.D. 658, assigned by the native historians for the destruction of Balabhi, and the extinction of the Balabhi sovereignty in the peninsula of Gujarat.

The Gupta Empire was the first power in the region in the early years of the Christian Era. After fierce battles, the region was taken over by the Chalukya Dynasty. Finally, the kingdom was annexed by the Solanki dynasty.

Two thousand years ago, there was a small town known as "Ankottaka" (present day Akota) on the western bank of the river Vishwamitri. The earliest mention of Vadodara is in a granth or charter of 812 that identifies it as Vadapadraka, a village attached to the nearby town of Ankottaka. In 600 AD, severe flooding of the Narmada River forced the inhabitants to move to its eastern side to a village known as Vatpatrak (literally, leaf of banyan tree) which developed into Vadodara. In the 10th century, Vadapadraka replaced Ankottaka as the main town.

The Vadodara city was once called Chandanavati after its ruler Raja Chandan of the Dor tribe, who wrested it from the Jains. The capital was also known as Virakshetra or Viravati (Land of Warriors). Later on it was known as Vadpatraka or Vadodará, which according to tradition is a corrupt form of the Sanskrit word vatodar meaning in the heart of the Banyan tree. It is now almost impossible to ascertain when the various changes in the name were made; but early English travellers and merchants mention the town as Brodera,[8] and it is from this that the name Baroda is derived. In 1974, the official name of the city was changed to Vadodara.

It is believed that early man lived on the banks of the Mahi River, which formed the flood plain during that age.[9] The movements of these hunter-gatherers, living on the banks of the river, grubbing the roots and killing animals with crude stone tools made out of the cobbles and pebbles available on the river bank, were necessarily controlled by the availability of convenient raw materials for their tools. There is evidence of the existence of early man in the Mahi River valley at a number of sites within 10 to 20 kms to the north-east of Vadodara. However, no evidence of the existence of these people is found in and around present day Vadodara. This may be because of the absence of gravels and cobbles on the banks of the Vishwamitri rivulet.

The next phase of the pre-historic Vadodara witnessed the first human settlement on the right bank of the river Vishwamitri on a group of dunes resting on the alluvium of the river. These people still belonged to the stone age, crafting their tools with finely grained stones. From their material culture and physical environment, they seem to have belonged to the same culture as those whose implements were found in the Mahi River valley. This human settlement has been dated to 1000 BC.

Around the beginning of the Christian Era, a small township developed at the same spot as the above-mentioned settlement on the right bank of the river. It came to be known as Ankotakka (present day Akota). The mound on which this settlement was established came to be known as Dhantekri. The entire settlement was developed by clearing the grazing land and forests of Ankhol and covered an area of .5 to .75 square kms. This indicated the presence of thick forests during those times. Due to its location on the ancient trade route between Gujarat and Malwa, this small township flourished into a commercial centre.

The township of Ankotakka developed during the rule of the Guptas and the Vallabhis. It was subjected to periodical heavy floods and severe flood which inundated the renovated public hall, forced the inhabitants to abandon this township and moved away from the banks of the Vishwamitri. The flood occurred in 600 AD where upon the inhabitants moved to the east of Ankotakka to another elevated portion located in the present Kothi area. This formed the nucleus of a new township.

The province was mainly Hindu-dominated with Hindu kings ruling until 1297.

By this time Muslim rule had spread across India, and the reins of power were then snatched by the Delhi Sultans. The city was ruled for a long time by these Sultans, until they were overthrown by the Mughals. The Mughals biggest problem were the Marathas who eventually took over the region. It became the capital of the Maratha Gaekwads.

Sayajirao Gaekwad III (1875–1939) made many public and bureaucratic improvements in the region. Although the British had a major influence on the region, Baroda remained a princely state until Independence. Like many other princely states, Baroda also joined the Dominion of India in 1947.