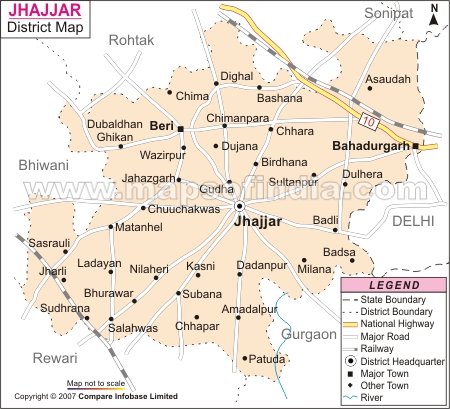 Jahazgarh (जहाजगढ़) spelt as Jahajgarh is a village in Beri tahsil of Jhajjar district of Haryana. It is located on Charkhi Dadri - Delhi Highway. It is famous in Haryana for hosting one of the biggest Animal Fairs annually.

Jahazgarh is corrupted form of Georgegarh, founded by George Thomas.

George Thomas (1756-1802), a free lance mercenary who became ruler of a large tract of Haryana, including Hisar and Hansi, for a few years from 1797 to 1802, founded a fort here which was known as 'garh' in local parlance. This George and Garh have conjoined to give the name to the place first as Georgegarh which later changed into Jahazgarh.

Lepel H. Griffin writes:[1]George Thomas,* who had come to the assistance of the Rai Kot Chief, was an Englishman of some tact and courage, who had come to India in the year 1781, and had Wandered about the country seeking his fortune for several years, till he was taken into the service of the famous Zebun Nissa, more commonly known as Begum Samru.

Leaves her for the Mahrattas:

In 1792, for some misconduct, he was reduced in rank, and left her service in disgust for that of Apa Khandi Rao, a Mahratta Chief, relative of Madhaji Sindhia, and master of the Jhajjar, Dadri, and Narnol territory. Thomas raised troops for the Mahrattas and instructed them as well as he was able in the European system of drill, and, in return, the district of Jhajjar was assigned him in jagir. Here he built a fort which he named "Georgegarh," but which, by the people, was corrupted into " Jahazgarh."

He sets up for himself:

When Bawa Rao, the nephew of Apa Khandi Rao, succeeded his uncle, Thomas became independent, and, taking possession of Hansi and Hissar, begain to encroach on the neighbouring States. He had a force of eight regiments of foot, a thousand horsemen and about fifty guns ; and he strengthened the old fort of Hansi, which he made his capital. In 1797, he made overtures to the principal Sikh Chiefs, inviting them to join him in a combined resistance to the Mahrattas, and in the conquest of Northern India ; but they regarded him with suspicion, for his selfish aims were barely concealed, and they thought that to help him would only be to resign their own independence.

* The history of George Thomas has been written and no more of it will consequently be noticed here than is necessary to explain his connection with Pattiala history from 1798 to 1802. The work is now, however, very rare.- The Military memoirs of George Thomas,410, by W. Frankin, Calutta, 1803.

Jagdishpur village in Bulandshahr district (UP) was founded by Vaire (वैरे) Jats, who migrated from Jahazgarh in Jhajjar district of Haryana.

Ch. Sheobux jakhar was Zaildar in the village. His grandson Ch. Dilbag Singh is Naberdar and ex. sarpanch of the village.