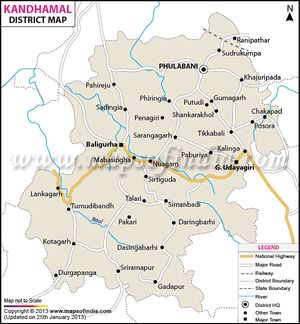 Kandhamal is a district of the state of Odisha, India. The district headquarters of the district is Phulbani.

The district lies between 83.30° E to 84-48° E longitude and 19-34° N to 20-54° latitude. The district headquarters is Phulbani, located in the central part of the district. The other popular locations are Baliguda, G. Udayagiri, Tikabali and Raikia.

Phulbani is named after the lady 'Phulardei' who was sacrificed by the local inhabitants as a act of religious ritual to Mother Earth (MERIA). Phulbani is located at 20.47°N 84.23°E. It has an average elevation of 485 metres. It is located 211 km from Bhubaneshwar, the capital of Odisha and 165 km from Berhampur, the major city of South Odisha. Phulbani is surrounded by River Salunki.

Balaskumpa is a village in this south-east of Kandhmal (Phulbani) Sub-Division situated 20-25’N and 84-21’ at the confluence of two hill streams which combine to form Pilla Salki river. The village contains a shrine, Baraladevi, the presiding deity of Kandhamal. The goddess is worshipped every year in the bright fortnight of Aswin (Sept-October). It is 15 km from Phulbani district headquarters, connected by a good road.

Belghar is situated at a height of more than 2,000 609.6 metres above the sea level in Balliguda sub-division. It is connected by a road. The place is 70 km from Balliguda and 155 km from Phulbani. The place is full picturesque scenery, mountains, forest and wild animals, especially elephants. It is believed to be homeland of Kutia Kandhas, who are considered to be the descendants of primitive inhabitants of the area. The place is having an Inspection Bungalow of Forest Department, which is built with wooden planks. It is lighted by solar power. Ushabali valley near the village is one of the rare beauty spots in this hilly region. Some times flocks of peacocks are seen by the roadside and haunted by wild elephants.

Chakapad is situated about 800 ft (243.84 m) from sea level in G. Udayagiri Tahasil. Lord Birupakhya (Virupaksha:Siva) is the presiding deity of the area. The historical river Bhrutanga is flowing feature of the place is that, the trees all around and the Siva Linga inside the temple lean towards south.

Another temple dedicated to Lord Anandeswar and Jogeswar (Siva) is located near by one big fairies held here on the Sivaratri day. The place is situated in the midst of thick forest, abounds in beautiful natural scenery.

The arya Gurukula Ashram, Vedvyas, Sundargarh district has found an Asharam here, known as Banabasi Kalyan Ashram. The inmates are mostly Adivasi boys, who along with general and physical education are taught with Vedas and Scriptures. It is 70 km from Phulbani. The Ashram was established by one Swami Laxmananand Saraswati, a great seer who was popular among tribals for his work. He was killed by Naxalites on 23 August 2008.

Daringbadi is situated at a height of about 914.4 m above sea level in Balliguda sub-division. It is 105 km from Phulbani. The place can be approached directly from Berhampur. The place is attractive in summer season due to its low temperature. Hill View point has been developed at Daringbadi where from a visitor could watch and enjoy the beauty of valley. Tourist complex has been built at Daringibadi for accommodation of the tourists. Vast patch of Coffee plantation attract a large number of visitors to Daringibadi all through the year.

Dungi is about 45 km from Phulbani situated on Phulbani-Berhampur road in G. Udayagiri Tehsil. This is the only archaeological site in Kandhmal district. There was one Buddha Vihar of the 11th century, after it is ruined, Siva temples have come up on the site, excavated during construction of new temples and are kept in the temple premises. One Buddha statue has been shifted to the Odisha State Museum, Bhubaneswar from the nearby area.

Jalespeta is about 127 km from Phulbani situated near Tumudibandh. Vedantakeshari Swami Laxmanananda Saraswati had established the Shakaracharya Kanyshram, a residential Sanskrit school tribal girls here. He was brutally killed there on Janmashtami day.

Ludu is located about 100 km from Balliguda in Kotagarh Block and 185 km from Phulbani. It is situated in dense forest inhabited by wild elephants. One fair weather road is leading to the side via Subarngiri. There is a waterfall 100’ high.

Mandasaru Kuti is about 100 km from Phulbani in Raikia Block. There is an old church on the outskirts of the village, surrounded by mountains. Nearby is a mountain gorge.

Pakadajhar is about 30 km from Phulbani town near the village Sudrukumpa situated on Phulbani-Boudh road in Phulbani Tahasil. There is one waterfall of 60’ height in natural forest background. One good road is leading to the site from Sudrukumpa. With recent development of the destinations a lot of tourists haunt the place for picnic from early November to end of February.

Putudi is 18 km from Phulbani town with a waterfall of 100 feet height, situated in dense forest. The roaring sound of water fall with dense forest all around creates a thrilling sensation to the mind of visitors. One good road is leading to the side. The waterfall is on the river Salunki and excellent shooting spot.

Rushimal is situated about 50 km from Daringibadi near the village Tamangi in Hattimunda G. P. A group of hills known as Rushimal hills from which originates river Rushikulya. At the source there is a small reservoir known as “Rushikunda” and above the hill top a cave known as “Rushigumpha”. The place is famous for Baruniyatra.

Urmagada is 17 km from Phulbani town on Phulbani-Gochhapada road in Phulbani Tahasil. The waterfall is of 50’ height, situated in a dense forest. One fair-weather road is leading to the site.may not pai