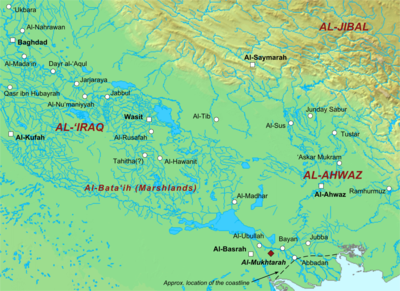 Khuzistan or Khuzestan Province (Persian: استان خوزستان‎, Ostān-e Khūzestān) ، is one of the 31 provinces of Iran. Its capital is Ahvaz

It is in the southwest of the country, bordering Iraq's Basra Province and the Persian Gulf. Its capital is Ahvaz and covers an area of 63,238 km². Other major cities include Behbahan, Abadan, Andimeshk, Khorramshahr, Bandar Imam, Dezful, Shushtar, Omidiyeh, Izeh, Baq-e-Malek, Mah Shahr, Susangerd, Ramhormoz, Shadegan, Susa, Masjed Soleiman, Minoo Island and Hoveizeh.

Origin of the name Khuzestan

In some instances, sugar and sugar cane have been given as the meaning of Khuz.[1] The fertile soil of Khuzestan has a splendid potential for growing this plant, making excellent harvests for sugar cane possible here.

However, most experts believe the name Khuzestan to be derived from Ķūzī, the name of the original non-Semitic people of the province, whose distinctive language reportedly survived until Sassanid times.[2]

As the most ancient Iranian province, it is often referred to as the "birthplace of the nation," as this is where the history of the Persian Empire begins. Historically, Khuzestan is what historians refer to as ancient Elam, whose capital was in Susa. The Achaemenid Old Persian term for Elam was Hujiyā, which is present in the modern name. Khuzestan, meaning "the Land of the Khuz" refers to the original inhabitants of this province, the "Susian" people (Old Persian "Huza" or Huja (as in the inscription at the tomb of Darius the Great at Naqsh-e Rostam, (the Shushan of the Hebrew sources) where it is recorded as inscription as "Hauja" or "Huja"). This is in conformity with the same evolutionary process where the Old Persian changed the name Sindh into Hind/Hindustan. In Middle Persian the term evolves into "Khuz" and "Kuzi". The pre-Islamic Partho-Sasanian Inscriptions gives the name of the province as Khwuzestan.

The seat of the province has for the most of its history been in the northern reaches of the land, first at Susa (Shush) and then at Shushtar. During a short spell in the Sasanian era, the capital of the province was moved to its geographical center, where the river town of Hormuz-Ardasher, founded over the foundation of the ancient Hoorpahir by Ardashir I, the founder of the Sasanian Dynasty in the 3rd century CE. This town is now known as Ahvaz. However, later in the Sasanian time and throughout the Islamic era, the provincial seat returned and stayed at Shushter, until the late Qajar period. With the increase in the international sea commerce arriving on the shores of Khuzistan, Ahvaz became a more suitable location for the provincial capital. The River Karun is navigable all the way to Ahvaz (above which, it flows through rapids). The town was thus refurbished by the order of the Qajar king, Naser al-Din Shah and renamed after him, Nâseri. Shushtar quickly declined, while Ahvaz/Nâseri prospered to the present day.

The province of Khuzestan is one of the centres of ancient civilization, based around Susa. The first large scale empire based here was that of the powerful 4th millennium BC Elamites.

Archeological ruins verify the entire province of Khuzestan to be home to the Elamite civilization, a non-Semitic, and non-Indo-European-speaking kingdom, and "the earliest civilization of Persia".[3] The name Khuzestan is derived from the Elamite (Ūvja).[4]

In fact, in the words of Elton L. Daniel, the Elamites were "the founders of the first 'Iranian' empire in the geographic sense."[5] Hence the central geopolitical significance of Khuzestan, the seat of Iran's first empire.

In 640 BC, the Elamites were defeated by Ashurbanipal, coming under the rule of the Assyrians who brought destruction upon Susa and Chogha Zanbil. But in 538 BC, Cyrus the Great was able to re-conquer the Elamite lands. The city of Susa was then proclaimed as one of the Achaemenid capitals. Darius the Great then erected a grand palace known as Apadana there in 521 BC. But this astonishing period of glory and splendor of the Achaemenian dynasty came to an end by the conquests of Alexander of Macedon. After Alexander, the Seleucid dynasty came to rule the area.

As the Seleucid dynasty weakened, Mehrdad I the Parthian (171-137 BC), gained ascendency over the region. During the Sassanid dynasty this area thrived tremendously and flourished, and this dynasty was responsible for the many constructions that were erected in Ahvaz, Shushtar, and the north of Andimeshk.

During the early years of the reign of Shapur II (AD 309 or 310-379), Arabs crossed the Persian Gulf from Bahrain to "Ardashir-Khora" of Fars and raided the interior. In retaliation, Shapur II led an expedition through Bahrain, defeated the combined forces of the Arab tribes of "Taghleb", "Bakr bin Wael", and "Abd Al-Qays" and advanced temporarily into Yamama in central Najd. The Sassanids resettled these tribes in Kerman and Ahvaz. Arabs named Shapur II, as "Shabur Dhul-aktāf" after this battle.[6]

The Muslim invasion of Khuzestan took place in 639 AD under the command of Abu Musa al-Ash'ari from Basra, who drove the Persian satrap Hormuzan out of Ahvaz. Susa later fell, so Hormuzan fled to Shushtar. There his forces were besieged by Abu Musa for 18 months. Shushtar finally fell in 642 AD; the Khuzistan Chronicle records that an unknown Arab, living in the city, befriended a man in the army, and dug tunnels through the wall in return for a third of the spoil. The Basrans purged the Nestorians - the Exegete of the city and the Bishop of Hormizd, and all their students - but kept Hormuzan alive.[7]

There followed the conquests of Gundeshapur and of many other districts along the Tigris. The Battle of Nahāvand finally secured Khuzestan for the Muslim armies.[8]

During the Muslim conquest the Sassanids were allied with non-Muslim Arab tribes, which implies that those wars were religious, rather than national. For instance in 633-634, Khaled ibn Walid leader of the Muslim Army, defeated a force of the Sassanids' Arab auxiliaries from the tribes of Bakr, 'Ejl, Taghleb and Namer at 'Ayn Al-Tamr.[9]

The Muslim settlements by military garrisons in southern Iran was soon followed by other types of colonization. Some families, for example, took the opportunity to gain control of private estates.[10] Like the rest of Iran, the Muslim invasion thus brought Khuzestan under occupation of the Arabs of the Umayyad and Abbasid Caliphates, until Ya'qub bin Laith as-Saffar, from southeastern Iran, raised the flag of independence once more, and ultimately regained control over Khuzestan, among other parts of Iran, founding the short-lived Saffarid dynasty. From that point on, Iranian dynasties would continue to rule the region in succession as an important part of Iran.

In the Umayyad period, large groups of nomads from the Hanifa, Banu Tamim, and Abd al-Qays tribes crossed the Persian Gulf and occupied some of the richest Basran territories around Ahvaz and in Fars during the second Islamic civil war in 661-665/680-684 AD.[11]

During the Abbassid period, in the second half of the 10th century, the Assad tribe, taking advantage of quarrels under the Buwayhids, penetrated into Khuzestan, where a group of Tamim had been living since pre-Islamic times.[citation needed] However, following the fall of the Abbassid dynasty, the flow of Arab immigrants into Persia gradually diminished, but it nonetheless continued. In the latter part of the 16th century, the Bani Kaab (pronounced Chaub in the local Gulf dialect), from Kuwait, settled in Khuzestan.[12] And during the succeeding centuries, more Arab tribes moved from southern Iraq to Khuzestan.[13]

Giving an account of the Jats’ settlement in Persia, Qazi Athar Mubarakpuri had stated that they had been living in this region since a long time and they had developed many big and flourishing towns of their own as we are informed by Ibn-i-Khurdazbeh (d.893 AD) that at about sixty miles away from the city of Ahwaz, there is a big city of the Jats, which is known after them as al-Zutt. [14] Another geographer of the same period had also observed that in the vicinity of Khuzistan there was a grand city Haumat al-Zutt. [15] These evidences given by the eminent author are enough to suggest that the Jats who settled in Persia gradually built up their economic resources and made significant contribution to urbanization of that country. [16]

The studies of Quzi Athar Mubarakpuri also bring to light that the Jats did not remain confined to Persia. They got settlement in different Parts of Arab land, which was under the Persian rule in those days. The Arab geographers testified that fact that in the coastal region of the Persian Gulf from Ubullah to Bahrain they had many pockets of their population and that they engaged themselves in different kind of work including cattle breeding. [17], [18] It is also confirmed by the Arab historians that in pre Islamic period their largest concentration was found in Ubullah, a fertile and pleasant place near the city of Basrah. Their second big settlement was in Bahrain where they had been residing in large numbers prior to the period of Muhammad as we are informed by Al-Baladhuri and other historians [19] In the same way, there are clear evidences for their settlement in Yemen before the advent of Islam and their important role in socio- political life of those days Yemen. In the times of pious Caliphs when Persia and many parts of the Arab region (previously ruled by Persian and Roman Kings) came under the Muslim army and a number of them got converted to Islam also. It is confirmed by different historical and geographical works, as cited by Maulana Mubarakpuri that they had settled in large number in Antioc and coastal town of Syria under the patronage of the pious and Umayyad caliphate (Khilafat-e-Rashidah and Banu Umayyad) [20], [21]

A very important and useful information that comes forth through the researches of Maulana Mubarakpuri is that the people of Makkah and Madinah in the times of Muhammad were not only familiar with the Indians, the Jats were also well known to them. On the authority of Sirat-i-Ibn-i-Hisham, Maulana has stated that once some people came from Najran to Madinah. Looking at them, Muhammad asked who are they ? They are just like Indians. [22], [23]

These Indians were assumed to be Jats (Zutt). In the same way, it is recorded in Jami-i-Tirmezi, the well known collection of Hadith that the famous Sahabi Sazrat Abdullah Ibn Masood once saw some persons in the company of Muhammad in Makkah, he observed that their hair and body structure is just like the Jats. There are also some other references in the Arabic source to the existence of the Jats in Madinah in that period. They also included a physician (Tabib) who was once consulted during the illness of Aisha, the wife of Muhammad. [24]

It is very interesting that we come to know through the studies of Maulana Mubarakpuri that the Jats residing in Bahrain, Yemen and other coastal regions in a large number had influenced the local Arabs by their language to such extent that the latter lost the originality and eloquence of their language. For the same reason the language of the people of the tribes of Banu Abd Qais and Azd was declared to be diluted and unauthentic due to their mingling and frequent interaction with Persian and Indian people. [25], [26]