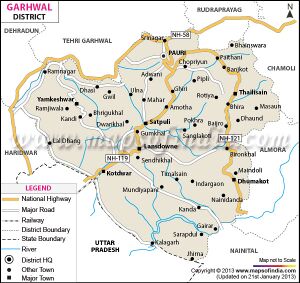 Kotdwara or Kotdwar is a town and tahsil in the Pauri Garhwal district of Uttarakhand.

It is situated in the south-western part of state and is one of the main entrance points in the state of Uttarakhand. It is situated on the banks of three seasonal rivers namely Kho, Malini, and Sukhro.

Kotdwar was called Khohdwara initially, meaning a gateway to the Khoh, after Khoh River on whose banks it is located. Kotdwar is a transformation of this name. The town has always been a commercial centre; and being located on the foothills of Garhwal region, it has played the important role of a supplier of essentials to the upper reaches of the hills, such as Pauri, Srinagar, Badrinath and Kedarnath.

In common with the rest of the region, Kotdwara was ruled by the Mauryan Empire under Ashoka the Great, then by the Katyuri dynasty followed by the Panwar dynasty of Garhwal. The Gorkhas of Nepal followed for a brief 12 years and then the British colonists.