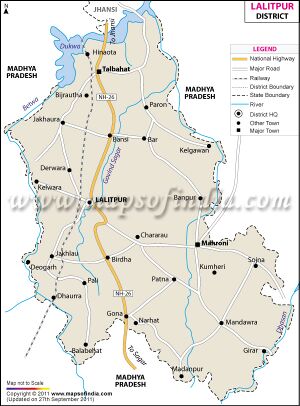 Lalitpur (ललितपुर) is a city and district in the Indian state of Uttar Pradesh. The city is part of Bundelkhand region. Lalitpur District is a part of Jhansi Division and was carved out as a district in the year 1974.

Lalitpur district lies between latitude 24°11' and 25°14' (north) and longitude 78°10' and 79°0' (east) and is bounded by district Jhansi in the north, districts Sagar and Tikamgarh of Madhya Pradesh state in the east and Ashoknagar district of Madhya Pradesh separated by river Betwa in the west.

The territory of the present-day Lalitpur district was part of the state of Chanderi, founded in the 17th century by a Bundela Rajput who was descended from Rudra Pratap Singh of Orchha. Chanderi, along with most of Bundelkhand, came under Maratha hegemony in the 18th century. Daulat Rao Sindhia of neighboring Gwalior annexed Chanderi state in 1812. In 1844, the former state of Chanderi was ceded to the British, and became the Chanderi District of British India, with Lalitpur town as the district headquarters. The British lost the district in the Indian Rebellion of 1857, and it was not reconquered until late 1858. In 1861, the portion of the district west of the Betwa, including Chanderi, was returned to Gwalior state, and the remainder was renamed Lalitpur district.[1] It became a part of Jhansi district from 1891 to 1974. In 1974, the district was carved out from Jhansi district.