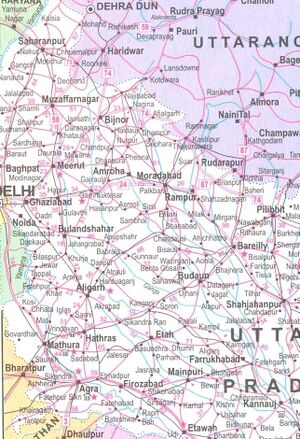 Uttar Pradesh (Hindi: उत्तर प्रदेश, Urdu: اتر پردیش) also popularly known by its abbreviation U.P., means the 'northern province'. It is the most populous and fifth largest state in the Union of India.

In addition to this there are about 2.63 % Muslim Jats.

Uttar Pradesh covers a large part of the highly fertile and densely populated upper Gangetic plain. It shares an international border with Nepal and is bounded by the Indian states of Uttaranchal, Himachal Pradesh, Haryana, Delhi, Rajasthan, Madhya Pradesh, Chhattisgarh, Jharkhand and Bihar. The administrative and legislative capital of Uttar Pradesh is Lucknow; its high court is based at Allahabad. Other notable cities in Uttar Pradesh include NOIDA, Agra, Mathura, Aligarh, Varanasi (Banaras), Gorakhpur, Kanpur and Meerut.

Uttar Pradesh has an important place in the history of Hinduism, as well as the history of ancient India. Control over the region was vital to the power and stability of all of India's empires and kingdoms - of Hindus, Muslims and Europeans.

The ancient Hindu kingdom of Kosala in Ayodhya, where Lord Rama of the Ramayana believed to have reigned was located here and Lord Krishna, revered as the eighth Avatara of Vishnu, is believed to have been born in the city of Mathura.

The Mahabharat war and the aftermath took part in the area between Uttar Pradesh and Delhi. It was ruled under King Yudhishtira after the Mahabharat.

After that, this area was sometimes divided between petty kingdoms or formed important parts of larger empires from the east or the west, including the Mauryan, Guptas and Kushan empires.

The Kannauj Empire originated from the heart of the Ganga Yamuna Doab and covered areas from Afghanistan to Kashmir, Bengal and the Vindhyas. This empire was at its zenith during the reign of Harshavardhana.

The exact Jat population in Uttar Pradesh at present is not available as there is no caste wise census after 1931 in India. We can take 1931 Jat population as an indication of the proportion of it to the other castes. It can also be extrapolated on the ration of 2001 census and 1931 census, which can give approximate Jat population.

The population of Jats in then 11 districts of the state where they were in sizable proportion was as under:

see the list of Martyrs of Kargil war from Uttar Pradesh