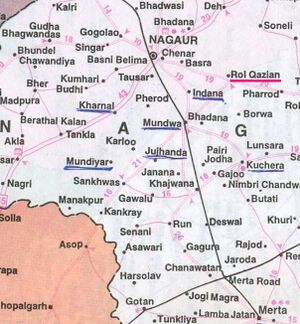 Lamba Jatan (लाम्बा जाटान) is a large village in Merta tehsil of Nagaur district in Rajasthan.

It is located between Merta and Gotan. One can reach from Gotan or Merta city.

Pincode of the village is 341510. It is situated 18km away from Merta town (in west direction) and 70km away from Nagaur city. Being a large village, Lamba Jatan has its own gram panchayat. Indokiya Was, Dhanapa and Gangarda are some of the neighbouring villages.

Percentage of castes is: Jats 50 %, and remaining others.

Local tradition says that there used to live a Brahman named Lumba Ram in an Ashram. Later Jats came and settled here. So the habitation was known as Lamba Jatan.

There are 5 temples, One Sati sthal, One Samadhi of Garbnathji, Math and Pawani Dham.