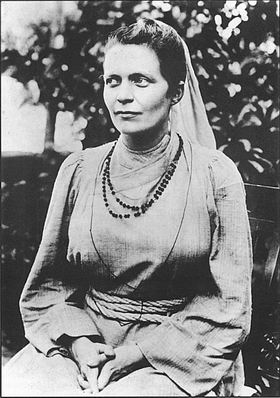 Sister Nivedita born Margaret Elizabeth Noble (28 October 1867 – 13 October 1911) was an Irish teacher, author, social activist, school founder and disciple of Swami Vivekananda. She spent her childhood and early youth in Ireland. She was engaged to marry a Welsh youth, but he died soon after their engagement.

Margaret Elizabeth Noble was born on 28 October 1867 in the town of Dungannon in County Tyrone, Ireland to Mary Isabel and Samuel Richmond Noble; she was named for her paternal grandmother. The Nobles were of Scottish descent, settled in Ireland for about five centuries. Her father, who was a pastor, taught that service to mankind is the true service to God. The Nobles had six children of whom only Margaret (the eldest), May, and Richmond survived.

When Margaret was one year old, Samuel moved to Manchester, England; there he enrolled as a theological student of the Wesleyan Church. Young Margaret stayed with her maternal grandfather, Hamilton, in Ireland.

When she was four years old, she returned to live with her parents at Great Torrington in Devonshire.[1] Margaret was her father's favorite child. When Samuel Noble conducted services or visited the poor, she accompanied him.

Margaret's father died in 1877 when she was ten years old. Margaret with her mother and two siblings returned to her grandfather Hamilton's home in Ireland. Margaret's mother, Mary, took up a kindergarten course in London and became a teacher. Later, Mary helped her father to run a guest-house near Belfast. Hamilton was one of the first-ranking leaders of the Irish nationalist movement. Besides her father's religious temperament, Margaret imbibed the spirit of freedom and love for her country through her grandfather Hamilton.[2]

Margaret was educated at Halifax College, run by a member of the Congregationalist Church. The headmistress of this college taught her about personal sacrifice.[3] She studied subjects, including physics, arts, music, and literature.

At the age of seventeen in 1884, she first started a career in teaching at a school in Keswick. In 1886, she went to Rugby to teach in an orphanage. A year later, she took up a post at the coal-mining area of Wrexham in North Wales. Here, she revived her spirit of service and love for the poor, which she had inherited from her father. At Wrexham, Margaret became engaged to be married to a Welsh youth, who died soon after the engagement. In 1889, Margaret moved to Chester. By this time, her sister May and brother Richmond were living in Liverpool. Soon, their mother Mary joined them. Margaret was happy to be reunited with her family. Occasionally, she went to Liverpool to stay with them.

Margaret resumed her studies in the field of education.[10] She became acquainted with the ideas of the Swiss education reformer Johann Heinrich Pestalozzi and with the German Friedrich Fröbel. Both Pestalozzi and Froebel emphasized the importance of preschool education. They opined that education should begin by gratifying and cultivating the normal aptitude of the child for exercise, play, observation, imitation, and construction. A group of teachers in England was attracted to this novel method of teaching, and they tried to put it into practice. Thus, the 'New Education' was advocated and Margaret, too, became a part of it. Soon, she became a favourite writer and speaker at the Sunday Club and the Liverpool Science Club.[4]

In 1891, Margaret settled in Wimbledon and helped, a Mrs. de Leeuw, to start a new school in London. The new experiment in teaching gave her great joy. After a year, in 1892, Margaret started her own independent school at Kingsleygate. At her school, there were no restrictive set methods and formal learning. Children learned through play. At this time, Margaret learned to be a critic of art from one of her staff teachers, Ebenezer Cooke, a well-known art master and reformer of art education.[5]

As she gained mastery as an educator, she also became a prolific writer in paper and periodicals and a popular speaker. Soon she became a name among the intellectuals of London and became acquainted with some of the most learned and influential people of her time. Among them were Lady Ripon and Lady Isabel Margesson. They were the founders of a literary coterie, which came to be known as the Sesame Club. The Times of London of 26 October 1911, wrote about Margaret, "A trained teacher of exceptional gifts, she was one of a group of educationists who in the early nineties founded the Sesame Club." Famous writers, such as Bernard Shaw and Thomas Huxley, were some of the regular speakers at the Sesame Club. Discussions were held here on literature, ethics, politics, and other similar subjects.[6]

In 1892, when the Home Rule Bill for Ireland was before the Parliament, Margaret spoke fearlessly in favor of it.

Responding to Swami Vivekananda's call, Margaret travelled to India, leaving behind her friends and family, including her mother. Mombasa, the ship bringing Margaret to India, reached Calcutta on 28 January 1898. On 22 February, Margaret visited Dakshineshwar temple, the place where Ramakrishna did his sadhana. Swami Vivekananda devoted the initial few days in teaching her about India and its people, and helping her develop the love for the people; he was broadening her character. He explained India's history, philosophy, literature, the life of the common mass, social traditions, and also the lives of great personalities, both ancient and modern, to her. A few weeks later, two of Swami Vivekananda's women disciples in America, Sara C. Bull, wife of famous Norwegian violinist and composer Ole Bull and Josephine MacLeod arrived in India. The three became lifelong friends. On 11 March 1898, Swami Vivekananda organized a public meeting at Star Theatre to introduce Sister Nivedita to the people of Calcutta. In his speech, Swami Vivekananda said – "England has sent us another gift in Miss Margaret Noble." In this meeting, Margaret expressed her desire to serve India and its people. On 17 March she met Sarada Devi who greeted Margaret affectionately as Khooki (i.e. little girl).[7]

Sister Nivedita met Swami Vivekananda in 1895 in London and travelled to Calcutta (present-day Kolkata), India in 1898. Swami Vivekananda gave her the name Nivedita when he initiated her into the vow of Brahmacharya on 25 March 1898. In November 1898, she opened a girls' school in the Bagbazar area of Calcutta. She wanted to educate girls who were deprived of even basic education. During the plague epidemic in Calcutta in 1899, Nivedita nursed and took care of the poor patients. Nivedita had close associations with the newly established Ramakrishna Mission. Because of her active contribution in the field of Indian Nationalism, she had to publicly dissociate herself from the activities of the Ramakrishna Mission under the then president, Swami Brahmananda. She was very close to Sarada Devi, the spiritual consort of Ramakrishna and one of the major influences behind Ramakrishna Mission, and also with all brother disciples of Swami Vivekananda. 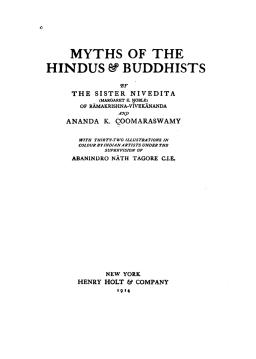 Myths and Legends of the Hindus & Buddhists

She died on 13 October 1911 in Darjeeling. Her epitaph reads, "Here lies Sister Nivedita who gave her all to India".[8]