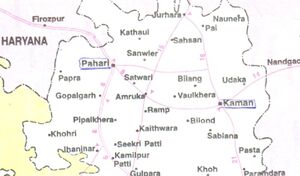 Location of Thoon in Bharatpur district

Sonokhar (सनोखर) is a village and site of Jat Fort in Kaman tahsil of Bharatpur distict in Rajasthan.

Sonokhar is a Village in Kaman Tehsil in Bharatpur District of Rajasthan State, India. It belongs to Bharatpur Division . It is located 73 KM towards North from District head quarters Bharatpur. 7 KM from Kaman. 196 KM from State capital Jaipur. Sonokhar Pin code is 321023 and postal head office is Jurhera. Bhandara ( 3 KM ) , Satwas ( 4 KM ) , Musepur ( 5 KM ) , Nandera ( 6 KM ) , Sahsan ( 6 KM ) are the nearby Villages to Sonokhar. This Place is in the border of the Bharatpur District and Mathura District. Mathura District Nandgaon is East towards this place . It is near to the Uttar Pradesh State Border.[1]

Kanungo[2] mentions....During the absence of Mirza Najaf Khan, Raja Nawal Singh made an attempt to recover his lost ground. He issued out of Deeg with his army and began to expel the amils of Mirza Najaf Khan from the country. Not content with this, he threatened to march upon Delhi. Mirza Najar Khan decided to postpone the intended campaign against Zabita Khan till he had crushed the Jat power once for all. While the monsoon was still raging in its full fury, he started on his second campaign against Nawal Singh. The Jat army [p.158]: retreated before the advance of the Mughals and hurriedly sought the shelter of the fort of Sankar3 (Sunukhar?) when the Mirza arrived at Barsana in pursuit of them. The Khan had no alternative than to besiege the enemy there, as any advance upon Deeg leaving the field army of Jats unbeaten in his rear was extremely dangerous. The heart of the Jat country now presented a formidable chain of strong forts, Sunukhar, Kama (the neutral territory belonging to Jaipur), Deeg, Kumher and Bharatpur.

The task of dislodging Nawal Singh from his fortified retreat, protected in the rear and flank by the neutral territory of Jaipur, proved a task of exceptional difficulty to the Muslim army. No longer proud of his mercenaries, the regent became more considerate to the Jats. They too, thus cornered by the enemy and compelled to fight for their very existence, began to show their wonted courage and stubbornness. They sallied out daily and fought skirmishes with the Muslim troopers, who could no longer claim success in every encounter. The siege dragged on for many days without making the least impression upon the besieged, who were fed by supplies sent secretly from the fort of Kama. The Rajput princes became equally alarmed at the revival of the imperial authority and did not fail to realise that as soon as the Jat resistance would fall to the ground the victorious Mughal would again carry war into the heart of Rajputana and demand tribute from them. The old animosity between the Bharatpur Raj and Jaipur had been buried in oblivion with the banes of the haughty Jawahar and the sensitive Madho Singh. The regency which controlled the affairs of

3. The name of the place as written in a MS. of the Ibratnama warrants the reading of Sankar, Singar or Sunkar. There is one Singar (tat. 27°25'; long. 77°"20') in the Gurgaon district and about 20 miles north of Kaman (Kama). The same authority tells us that the besieged Jat army at this place could so easily draw their supplies from Kama that without first reducing Kama, operations against the former place proved futile. So this cannot be Singar, at such a great distance from Kama. Sunukhar (lat. 27°45',long. 77°18'), about 8 miles north of Kama and 12 miles west of Barsana and situated in a marshy tract answers the description best. About half a mile south of Sunukhar there is a ruined fort called Sabalgarh.

[p.159]: the Jaipur State during the minority of Maharajah Prithvi Singh II decided to help the Jats in their struggle with Najaf Khan. The amil of Kama under instructions from his Govt continued to supply secretly provisions to the army of Nawal Singh. Mirza Najaf Khan could neither storm the enemy's position defended by numerous guns, nor could he by any means induce his adversary to leave the shelter of the fort and give a pitched battle for the decision of the long drawn out issue. The siege continued for four months when Mirza Najaf Khan was called away to the capital by some intrigues of Abdul Ahad Khan. He left Najaf Quli in supreme command of the army, and after his return to Delhi sent the notorious Somru4 to reinforce the besieging army at Sunukhar.

Somru, who was well acquainted with the situation of the place, represented to Najaf Quli Khan that as long as grain and fodder would continue to reach the Jat army from Kama it was impossible to bring the siege of Sunukhar to a successful close. Najaf Quli wrote to the amil of Kama not to give any assistance to the Jats. This remonstrance having proved ineffectual, that impetuous soldier decided upon attacking Kama without reflecting upon the political consequence of his action. He sent a portion of his army to besiege that fort. Nawal Singh having left a strong garrison at Sunukhar withdrew with his army to Deeg. The Kachhwahas now openly joined hands with the Jats to resist the imperialists. Najaf Quli's guns made very little impression upon the walls of the fort of Kama, which are said to have been so broad that two carts could drive side by side on their top without the least danger. He held out the promise of giving that fort to the brave Ruhela chief Mulla Rahimdad

4. According to Khair-ud-din, Somru deserted to the camp of Najaf Khan during the siege of Sankar, i.e. at the end of the rainy season of 1774. He gives a dramatic touch to the whole affair at the sacrifice of accuracy. We have the unassailable testimony of the Waqa that on the 20th of May, 1774 (see ante) Somru was given leave to depart for his fief of Panipat. It is more likely that Mirza Najaf Khan recalled him from Panipat and sent him against the Jats to aid Najaf Quli with his intimate knowledge of the Jat country and their weaknesses.

[p.160]: if he would succeed in capturing the place by a coup. One day Rahimdad at the head of his dare-devils stormed it by a rush, unmindful of the tremendous cost in the lives of his followers. But Najaf Quli broke his word and appointed Somru to the charge of Kama. Mulla Rahimdad, vowing eternal enmity to both, marched away with his 12,000 Ruhelas, horse and foot, to seek service with Nawal Singh [Ibratnama, MS. p. 266].

Nawal Singh gave a warm welcome to the Ruhela chief and his brave followers. He assigned suitable pay for every man and gave them large jagirs- in hort he showed them every consideration except trusting them within the gates of any of his forts. Prospects became more promising for the Jat at beginning of the year 1775. Mirza Najaf Khan had not only to fight with the sword the enemies of the empire abroad, but he had also to hold his own at the Court with the subtler weapons of diplomacy against the Emperor and His majesty' well-wishers like Abdul Ahad Khan. Scarcely had the Mirza succeeded in disentangling himself from the meshes of the Court intrigue, when he fell dangerously ill. The news spread abroad that he was dead, and thisencouraged the Jaipur darbar to make a vigorous effort for the recovery of the pargana Kama. Mirza Najaf Khan recovered from his illness, and on the 4th April, 1775 [Safar 2, 1189 H.] he took leave of the Emperor to march against the Jats and Rajputs (Waqa, 287). When the news of the coming of the Mirza became known, Raja Nawal Singh left Deeg with his army and came to Sunukhar which was still holding out. The forces of Jaipur also joined him, and the allied army encamped under the shelter of the fort and strongly entrenched their position. Mulla Rahimdad, now in the Jat service, was posted with his Ruhelas outside the fortifications of Sunukhar. Several petty actions took place in which the Afghans fought against their late comrades with all the vehemence of injured pride. Mirza Najaf Khan tried without success to win them back to his side, promising Kama and in addition several other parganas to Rahimdad as jagir. But Nawal Singh and his shrewd counsellors could not repose in peace on account of their Pathan ally whom they suspected to be in collusion with the imperialists.