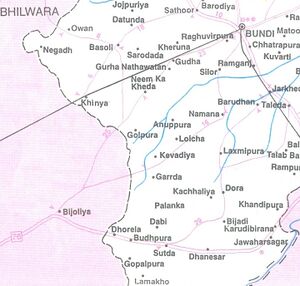 Sootra (Sontra) is a village in Bundi tehsil of Bundi district in Rajasthan.

James Tod[4] visited Sontra on 21st February 1820 and has provided us following information:

About a mile after we had commenced our march this morning, we observed the township of Sontra on our right, which is always conjoined to Dabi, to designate the tuppa of Dabi-Sontra, a sub-division of Loecha. Being informed by a scout that it contained inscriptions, I requested my guru and one of my Brahmins to go there. The search afforded a new proof of the universality of the Pramar sway, and of the conquests of another "Lord of the world " and the faith," Alla-o-din, the second Alexander. The Yati found several altars having inscriptions, and many pallias, from three of which, placed in juxta-position, he copied the following inscriptions(in box) : —

The following was copied from a coond, or fountain, excavated in the rock : —

[p.607]: Beneath the surface of the fountain was another inscription, but there was no time to bale out the water, which some future traveller over the Pat'har may accomplish. Sontra, or as classically written, Sutroodoorg, " the inaccessible to the foe," was one of the castles of the Pramar, no doubt dependent on Cheetore when under the Mori dynasty ; and this was only one of the subdivisions of Central India, which was all under Pramar dominion, from the Nerbudda to the Jumna: an assertion proved by inscriptions and traditions. We shall hear more of this at Mynal and Bijolli on our return over Oopermal, which I resolve to be thoroughly acquainted with.

Kotah, February 22d, 1820. eleven miles to the banks of the Chumbul. Although not a cloud was to be seen, the sun was invisible till more than spear-high, owing to a thick vapoury mist, accompanied by a cold piercing wind from the north-west. The descent was gradual all the way to the river, but the angle may be estimated from the fact that the pinnacle (kullus) of the palace, though one hundred and twenty feet above the level of the Chumbul, was not visible until within five miles of the bank. The barren tract we passed over is all in Boondi, until we approach Kotah, where the lands of Nandta intervene, the personal domain of the regent Zalim Sing, and the only territory belonging to Kotah west of the Chumbul. Kurripoora, as well as all this region, is inhabited by Bhils, of which race a very intelligent individual acted this morning as our guide. He says it is called by them Baba ca Noond, and that they were the sovereigns of it until dispossessed by the Rajpoots. We may credit them, for it is only fit for Bhils or their brethren of the forest, the wild-beasts. But I rejoiced at having seen it, though I have no wish to retrace my steps over this part of my journey. Half-way, we passed a roofless shed of loose stones, containing the divinity of the Bhils : it is in the midst of a grove of thorny tangled brushwood, whose boughs were here and there decorated with shreds of various coloured doth, offerings of the traveller to the forest divinity for protection against evil spirits, by which I suppose the Bhils them-selves are meant.*

We must not omit (though we have quitted the Pat'har) to notice the ' Maypoles' erected at the entrance of every village in the happy vasant or spring, whose concluding festival, the Holi or Saturnalia, is just over. This year the season has been most ungenial, and has produced sorrow rather than gladness. Every pole has a bundle of hay or straw tied at the top, and some have a cross stick like arms and a flag flying; but in many parts of the Pathar, the more symbolic plough was substituted, dedicated to the goddess of fruition, and served the double purpose of a Spring-pole, and frightening the deer from nibbling the young com.

The appearance of Kotah is very imposing, and impresses the mind with a more lively notion of wealth and activity than most cities in India. A strong wall with bastions runs parallel to, and at

* The same practice is described by Park as existing in Africa.

[p.608]: no great distance from, the river, at the southern extremity of which is the palace (placed within a castle separated from the town), whose cupolas and slender minarets give to it an air of light elegance. The scene is crowded with objects animate and inanimate. Between the river and the city are masses of people plying various trades ; but the eye dwells upon the terminating bastion to the north, which is a little fort of itself, and commands the country on both banks. But we shall have more to say regarding this during our halt, which is likely to be of some continuance.