Location of Menal in Chittaurgarh district 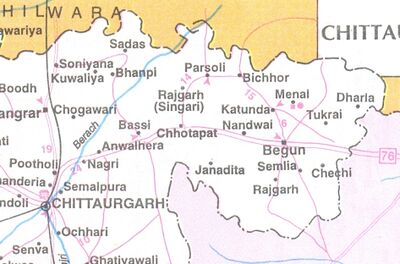 Location of Places around Begun

Menal (मेनाल) is a village in Begun tahsil in Chittorgarh district in Rajasthan.

Menal is is about 90 Kms. from Chittaurgarh in Rajasthan. Its ancient name was Mahanala (महानाल). Menal is also known as the "mini khajauraho", blessed with nature’s beauty, this picnic spot is situated on the Chittaur - Bundi road and is famous for the ancient temples, waterfalls and beautiful forests.

The Menal temple complex consists of a group of Siva temple on both sides of the waterfall. The name Menal is derived from Maha Nal (great gorge). This temple complex was built by Someshvar Chahamana and his queen Suhavadevi of the Shakambhari dynasty during the 11th century A.D (circa). The construction of the main structural group, on the left side of the gorge, is credited to the king while the single temple with a detached monastery across the river is associated with the queen, albeit the foundation inscription has been lost now. However, the fame of place grew during reign of King Prithviraj Chauhan, as it was his favourite mountain retreat during the scorching Rajasthan summers. For this he had built a palace on the banks of the Menal river which runs over granite slabs before finally plunging into a gorge over 122 meters deep. When it rains, the water flows over the granite rocks and plunges into a gorge 100 feet below into a pool and then proceeds onwards.

The 11th century Mahanaleshvara temple, is replete with various gates & arches in front of smaller temples is a perfect example of the western Indian style of stone temple architecture. The entrance is embellished with a seated stone lion, and there are number of guardian deities carved on protruding panels in the walls. The inner sanctum is dominated by projecting balconies while the roof is a pyramidal array of ribbed and finely carved stone. The entrance to the mansion is via a two storied gateway carved with images of the gods Ganesha and Bhairava. The square courtyard beyond the entrance houses a huge Shiva temple of stone, built in the ancient Hindu style with a carved pagoda and pillars. The walls of the temple are carved with motifs of Hindu deities and various other themes, interspersed with images of elephants. Of special mention are the images of Shiva and Parvati which form the chief subject of the engravings. Shiva and Parvati are depicted in various postures and surrounded by dancers, musicians, lesser gods and animals. Halfway up the pagoda is a large stone lion. A number of smaller ruined temples lie around the Shiva temple Though the main shrine dedicated to Lord Shiva is built in sand-stone, brick-work is visible wherever the surface of the tower covering The Garb-griha or Sanctum sanctorum of the Meental temple with ornate pillars along the sides of the smaller temples (perhaps even older) has peeled off. Before the main temple of Mahanala is a Nandi enclosure, solidly built, but barely sufficient to accommodate the bull.

We found many inscriptions at Mahanal, and of one I shall here insert a free translation, as it may be applied hereafter to the correction of the chronology of the Haras, of which race it contains a memorial.

The cryptographic date, contained in the above four words (Arga, Goon, Chandra, Indu), is not the least curious part of this inscription, to which I did not even look when composing the Bundi annals, and which is another of the many powerful proofs of the general fidelity of their poetic chronicles.

Arga is the sun, and denotes the number 12 ;
Goon is the three principal passions of the mind ; and
Chandra and Indu each stand for one : thus,

and this " concealed (goopta) treasure," alluded to in the inscription, must be read backwards. But either my expounder, or the silpi, was out, and had I not found S. 1446 in a corner, we should never have known the value of this treasure. Many inscriptions are useless from their dates being thus enigmatically expressed ; and I subjoin, in a note, a few of the magic runes, which may aid others to decipher them.†

I was more successful in another inscription of Irno or Arnodeva (fam. Arndeo), who appears to have held the entire Oopermal as a fief of Ajmer, and who is conspicuous in the Bijolli inscription. Of

[p.686]: this, suffice it to say, that it records his having "made the gateway " to Mynal, otherwise termed the city of Somiswar ;" and the date is

Anhul (fire) stands for three, denoting the third eye of Mahadevs, which is eventually to cause pralaya, or ' destruction.'
Nund stands for nine, or the no-nund of their ancient histories. :Indu, the moon, (twice repeated,) is one, and the whole, read backwards, is S. 1193, or A.D. 1137.

In the mundur of Samarsi, we found the fragment of another inscription, dated S. 12-2, and containing the eulogy of Samarsi and Arnoraj, lord of the region ; also the name of " Pirthi Raj, who " destroyed the barbarians ;" and concluding with Sawunt Sing.