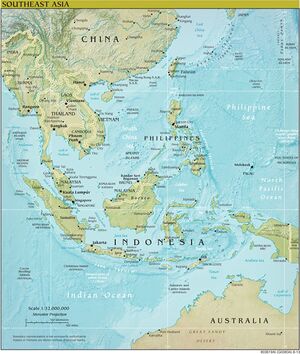 Southeast Asia is a subregion of Asia, consisting of the countries that are geographically south of China and Japan, east of India, west of Papua New Guinea, and north of Australia.[1]

Southeast Asia is bordered to the north by East Asia, to the west by South Asia and the Bay of Bengal, to the east by Oceania and the Pacific Ocean, and to the south by Australia and the Indian Ocean. The region is the only part of Asia that lies partly within the Southern Hemisphere, although the majority of it is in the Northern Hemisphere. In contemporary definition, Southeast Asia consists of two geographic regions:

The eastern half of Indonesia and East Timor (east of the Wallace Line) are considered to be biogeographically part of Oceania (Wallacea) due to its distinctive faunal features. New Guinea and its surrounding islands are geologically considered as a part of Australian continent, connected via the Sahul Shelf.

Most Southeast Asian people were originally animist, engaged in ancestors, nature, and spirits worship. These belief systems were later supplanted by Hinduism and Buddhism after the region, especially coastal areas, came under contacts with Indian subcontinent during the 1st century.[7] Indian Brahmins and traders brought Hinduism to the region and made contacts with local courts.[8] Local rulers converted to Hinduism or Buddhism and adopted Indian religious traditions to reinforce their legitimacy, elevate ritual status above their fellow chief counterparts and facilitate trade with South Asian states. They periodically invited Indian Brahmins into their realms and began a gradual process of Indianisation in the region.[9][10][11] Shaivism was the dominant religious tradition of many southern Indian Hindu kingdoms during the 1st century. It then spread into Southeast Asia via Bay of Bengal, Indochina, then Malay Archipelago, leading to thousands of Shiva temples on the islands of Indonesia as well as Cambodia and Vietnam, co-evolving with Buddhism in the region.[12][13] Theravada Buddhism entered the region during the 3rd century, via maritime trade routes between the region and Sri Lanka.[14] Buddhism later established a strong presence in Funan region in the 5th century.

The spread of these two Indian religions confined the adherents of Southeast Asian indigenous beliefs into remote inland areas. Maluku Islands and New Guinea were never been Indianised and its native people were predominantly animists until the 15th century when Islam began to spread in those areas.[16] While in Vietnam, Buddhism never managed to develop strong institutional networks due to strong Chinese influence.[17] In present-day Southeast Asia, Vietnam is the only country where its folk religion makes up the plurality.[18] Recently, Vietnamese folk religion is undergoing a revival with the support of the government.[19] Elsewhere, there are ethnic groups in Southeast Asia that resist conversion and still retain their original animist beliefs, such as the Dayaks in Kalimantan, the Igorots in Luzon, and the Shans in eastern Myanmar.[20]

After the region came under contacts with Indian subcontinent circa 400 BCE, it began a gradual process of Indianisation where Indian ideas such as religions, cultures, architectures and political administrations were brought by traders and religious figures and adopted by local rulers. In turn, Indian Brahmins and monks were invited by local rulers to live in their realms and help transforming local polities to become more Indianised, blending Indian and indigenous traditions.[21][22] Sanskrit and Pali became the elite language of the region, which effectively made Southeast Asia part of the Indosphere.[23] Most of the region had been Indianised during the first centuries, while the Philippines later Indianised circa 9th century when Kingdom of Tondo was established in Luzon.[24] Vietnam, especially its northern part, was never fully Indianised due to the many periods of Chinese domination it experienced.[25]

The first Indian-influenced polities established in the region were the Pyu city-states that already existed circa 2nd century BCE, located in inland Myanmar. It served as an overland trading hub between India and China.[26] Theravada Buddhism was the predominant religion of these city states, while the presence of other Indian religions such as Mahayana Buddhism and Hinduism were also widespread.[27] In the 1st century, the Funan states centered in Mekong Delta were established, encompassed modern-day Cambodia, southern Vietnam, Laos, and eastern Thailand. It became the dominant trading power in mainland Southeast Asia for about five centuries, provided passage for Indian and Chinese goods and assumed authority over the flow of commerce through Southeast Asia.[28] In maritime Southeast Asia, the first recorded Indianised kingdom was Salakanagara, established in western Java circa 2nd century CE. This Hindu kingdom was known by the Greeks as Argyre (Land of Silver).[29]

By the 5th century CE, trade networking between East and West was concentrated in the maritime route. Foreign traders were starting to use new routes such as Malacca and Sunda Strait due to the development of maritime Southeast Asia. This change resulted in the decline of Funan, while new maritime powers such as Srivijaya, Tarumanagara, and Medang emerged. Srivijaya especially became the dominant maritime power for more than 5 centuries, controlling both Strait of Malacca and Sunda Strait.[30] This dominance started to decline when Srivijaya were invaded by Chola Empire, a dominant maritime power of Indian subcontinent, in 1025.[31]The invasion reshaped power and trade in the region, resulted in the rise of new regional powers such as the Khmer Empire and Kahuripan.[32] Continued commercial contacts with the Chinese Empire enabled the Cholas to influence the local cultures. Many of the surviving examples of the Hindu cultural influence found today throughout Southeast Asia are the result of the Chola expeditions.[33] Angkor Wat in Siem Reap, Cambodia

As Srivijaya influence in the region declined, The Hindu Khmer Empire experienced a golden age during the 11th to 13th century CE. The empire's capital Angkor hosts majestic monuments—such as Angkor Wat and Bayon. Satellite imaging has revealed that Angkor, during its peak, was the largest pre-industrial urban centre in the world.[34] The Champa civilisation was located in what is today central Vietnam, and was a highly Indianised Hindu Kingdom. The Vietnamese launched a massive conquest against the Cham people during the 1471 Vietnamese invasion of Champa, ransacking and burning Champa, slaughtering thousands of Cham people, and forcibly assimilating them into Vietnamese culture.[35]

During the 13th century CE, the region experienced Mongol invasions, affected areas such as Vietnamese coast, inland Burma and Java. In 1258, 1285 and 1287, the Mongols tried to invade Đại Việt and Champa.[36] The invasions were unsuccessful, yet both Dai Viet and Champa agreed to become tributary states to Yuan dynasty to avoid further conflicts.[37] The Mongols also invaded Pagan Kingdom in Burma from 1277 to 1287, resulted in fragmentation of the Kingdom and rise of smaller Shan States ruled by local chieftains nominally submitted to Yuan dynasty.[38][39] However, in 1297, a new local power emerged. Myinsaing Kingdom became the real ruler of Central Burma and challenged the Mongol rule. This resulted in the second Mongol invasion of Burma in 1300, which was repulsed by Myinsaing.[40] The Mongols would later in 1303 withdrawn from Burma.[41] In 1292, The Mongols sent envoys to Singhasari Kingdom in Java to ask for submission to Mongol rule. Singhasari rejected the proposal and injured the envoys, enraged the Mongols and made them sent a large invasion fleet to Java. Unbeknownst to them, Singhasari collapsed in 1293 due to a revolt by Kadiri, one of its vassals. When the Mongols arrived in Java, a local prince named Raden Wijaya offered his service to assist the Mongols in punishing Kadiri. After Kadiri was defeated, Wijaya turned on his Mongol allies, ambushed their invasion fleet and forced them to immediately leave Java.[42]

After the departure of the Mongols, Wijaya established the Majapahit Empire in eastern Java in 1293. Majapahit would soon grew into a regional power. Its greatest ruler was Hayam Wuruk, whose reign from 1350 to 1389 marked the empire's peak when other kingdoms in the southern Malay Peninsula, Borneo, Sumatra, and Bali came under its influence. Various sources such as the Nagarakertagama also mention that its influence spanned over parts of Sulawesi, Maluku, and some areas of western New Guinea and southern Philippines, making it one of the largest empire to ever exist in Southeast Asian history.[43] By the 15th century CE however, Majapahit's influence began to wane due to many war of successions it experienced and the rise of new Islamic states such as Samudera Pasai and Malacca Sultanate around the strategic Strait of Malacca. Majapahit then collapsed around 1500. It was the last major Hindu kingdom and the last regional power in the region before the arrival of the Europeans.[44][45]