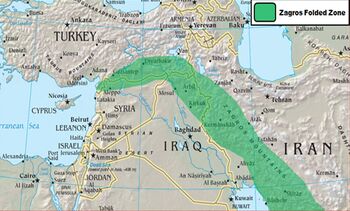 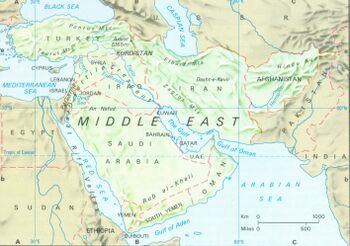 This mountain range has a total length of 1,500 kms. The Zagros mountain range begins in northwestern Iran and roughly corresponds to Iran's western border, and it spans the whole length of the western and southwestern Iranian plateau, ending at the Strait of Hormuz. The highest point in the Zagros Mountains is Dena. The Hazaran massif in the Kerman province of Iran forms an eastern outlier of the range, the Jebal Barez reaching into Sistan.

Signs of early agriculture date back as far as 9000 BC to the foothills of the Zagros Mountains,[2] in cities later named Anshan and Susa. Jarmo is one archaeological site in this area. Shanidar, where the ancient skeletal remains of Neanderthals have been found, is another.

Some of the earliest evidence of wine production has been discovered in the Zagros Mountains; both the settlements of Hajji Firuz Tepe and Godin Tepe have given evidence of wine storage dating between 3500 and 5400 BC.[3]

During early ancient times, the Zagros was the home of peoples such as the Kassites, Guti, Assyrians, Elamites and Mitanni, who periodically invaded the Sumerian and/or Akkadian cities of Mesopotamia. The mountains create a geographic barrier between the flatlands of Mesopotamia, which is in Iraq, and the Iranian plateau. A small archive of clay tablets detailing the complex interactions of these groups in the early second millennium BC has been found at Tell Shemshara along the Little Zab.[4] Tell Bazmusian, near Shemshara, was occupied between the sixth millennium BCE and the ninth century CE, although not continuously.[5]

Hukum Singh Panwar[6] writes that the presence of Jats in Indus Valley is fully confirmed by external sources. Hamza [7] of Isfahan (893-970) and half a century later, Firdausi furnish us with unimprechable evidence that "the Iranian emperor, Behram Gour (420-448 AD) secured from king Sankhala of North India his princess in marriage besides 12000 musicians of both sexes, known as Luri Jats, for participation in an Iranian national celebration, and in lieu of their excellent performances, settled them with ex gratia grants of land, oxen and grain in a province called as Luristan after them in Iran. Discovery of a district known as Zutt and certain villages of similar name in Luristan by Arab geographer and travellers, viz, Istakhari, Ibn-Hawkal, Mukaddasi, Yakut and Mustawfi reasonably compel us to conclude that those names must have been given by the Jats who were settled in Luristan by Behram Gour in the first half of the 5th century AD.

Luristan is a historic territory and province of western Iran, amidst the Zagros Mountains.