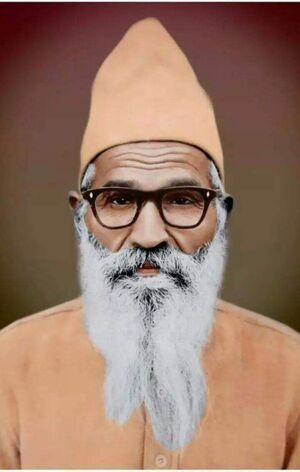 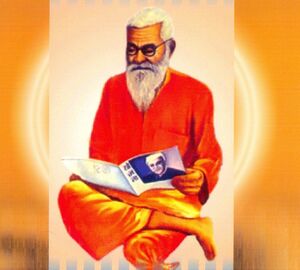 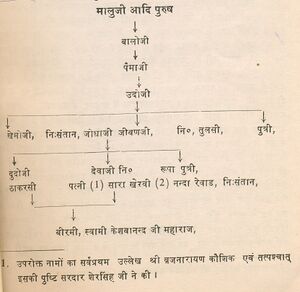 The Family Tree of Swami Keshwanand

Swami Keshwanand was born at village Magloona in Sikar district of Rajasthan in hindi month paush of samvat 1940 (1883 AD) in Dhaka gotra Hindu Jat family. The village Magloona was founded by his ancestor of 13th generations ago named Maluji Dhaka on Tuesday baisakh sudi panchami samvat 1451 (1394 AD). His father’s name was Thakarsi Dhaka and mother’s name Saran of Kherwa Jat clan. This information is based on traditional records of Bhat (Bard) Balu Singh of village Lordi tahsil Dudu of Jaipur district in Rajasthan. His childhood name was Birama.[1]

Some of ancestors are:

He was born at village Magloona in Sikar district of Rajasthan in year 1883 in a poor Dhaka gotra Jat Hindu family. His father’s name was Thakarsi and mother’s name Saran. His childhood name was Birama. Birama did not get the formal primary education, as there was no school in that desert region in those days of British Raj.

Birama spent his childhood as a shepherd boy. At the age of five years Birama along with family left the village Magloona and moved to nearby city Ratangarh. In Ratangarh his father Thakarsi used to carry Seths (Businessman) of Ratangarh to Delhi on his camel. He lost his father due to snake bite at the age of 7 at Ratangarh in 1890. Birama and his mother moved from here to there in search of fodder for animals and landed at village Kelania in Sri Ganganagar district in 1897.

This was the time when Rajasthan was heading for the gravest famine of history during year 1899, known as the chhapaniya akal. There was no vegetation left on the ground. There was no drop of water. All the animals died for want of fodder. People survived on the bark of Khejri trees and seeds of grasses. Even that also became scarce. There was nothing like governance. The ruling Samants were least bothered for the poor people. Birama’s mother Saran could not bear the natural and human calamity and died in year 1899 at village Kelania.

The greatest famine of the history, 1899, forced Birama to leave the desert region and moved to Punjab for livelihood. He approached Mahant Kushaldas of udasi sect and expressed willingness to learn Sanskrit. Mahant Kushaldas advised that as a Jat he would not be allowed to learn Sanskrit. Birama became sanyasi (saint) to learn Sanskrit language in 1904. He got education at Sadhu Ashram Fajilka (Punjab). He learnt Hindi, Gurumukhi and Sanskrit languages at the Ashram. In year 1905 on the occasion of Prayag Kumbh Mela Mahatma Hiranandji Avadhut awarded Birama, the title of Swami Keshwanand,.

Swami Keshwanand felt the heat of Jalianwala Bagh Massacre. He started going to the meetings of Arya Samaj and was influenced by its philosophy. He had a strong desire for the upliftment of helpless poor people. He started attending the meetings of Congress. He met Khan Abdul Gaffar Khan at Ahmedabad Adhiveshan of the Congress. Pandit Madan Mahan Malviya also influenced him. He attended Delhi Adhiveshan of the Congress chaired by Madan Mahan Malviya in 1919. He joined Indian Independence Movement under the leadership of Mahatma Gandhi. For taking part in Non-Co-operation Movement of Mahatma Gandhi, he was imprisoned for two years and was kept in Jail in Ferozepur (1921-1922). The role of Swami Keshwanand became so important in freedom movement that he was appointed dictator of Ferozepur district in 1930 to conduct the freedom movement in that area. He was again arrested in 1930 but released after the conclusion of Gandhi-Irvin Agreement.

Swami Keshwanand felt that the knowledge of Hindi language is must to keep the country united and to educate the public about nationality. He started “Vedant Pushp Vatika” library in year 1911 in the Ashram with the support of funds collected in it. In 1912 he started a Sanskrit school in the Ashram. In 1916 he handed over the charge of Ashram to his guru-bhai Shyamdas.

Social worker: Swami Keshwanand was a great social worker. He always remained associated with the spread of education, social and village upliftment. He was connected with the establishment of Sahitya Sadan, Abohar, Ferozepur district in Punjab (1917-1932). He started his progrrame of spreading knowledge of Hindi with a Hindi-forum in Abohar town. He founded ‘Nagari Pracharini Sabha’ institute at Abohar in 1920 that was renamed as Sahitya Sadan, Abohar.

His services for Hindi: He started a press ‘Deepak’ at Abohar in 1933 and published material in Hindi language and got distributed to villagers either free or at a very nominal price. Sahitya Sadan, Abohar developed into an institution comparable with Shantiniketan of Ravindranath Tagore. He organized 30th All India Hindi Sahitya Sammelan at Sahitya Sadan, Abohar in 1941. He was awarded degree of “Sahitya Vachaspati” looking to his services for Hindi in 1942.

An Educationist: Swami Keshwanand was connected with Gramothan Vidyapith Sangariya (Rajasthan) (1932-1952). He was made director of Jat School Sangaria in 1932 that was just to close for want of funds. He went from village to village and to the Seths of desert region who were in Calcutta and far off places and collected funds. He became instrumental in starting hundreds of schools in the desert region. The Jat School Sangaria was renamed as Gramothan Vidyapith, Sangaria in 1948. He developed here a beautiful museum with collection of rare documents, ancient items, paintings etc. brought from various places. Large-scale plantations were done in this arid area with the help of people and students of the Institute. Gramothan Vidyapith, Sangaria had become center of inspiration for educationists from India and abroad.

Swami Keshwanand, an orphan, illiterate, nomadic man who never got formal education in a school was the founder of more than 300 schools, 50 hostels, so many libraries, social service centers and museums. He got 100 books translated from other languages or wrote himself. With the great efforts of 11 years he got published the Book “History of Sikhs” in Hindi in 1954.

He had deep understanding of society in the desert region. He tried all his life with full devotion to remove social evils like untouchability, child marriage, woman illiteracy, indebtness, poverty, backwardness, intoxication, dissipation, bad customs etc. An idea about his visionary and logical thoughts can be had from the book he has published- “Maru Bhumi Seva Karya” in Hindi. In this book he has explained the peculiarities of the Desert region, identified the problems and suggested proper solutions.

Communal harmony: Swami Keshwanand, born in a Jat Hindu family, Sadhu of Udasi sect propagated by Srichandji, son of Sikh guru Nanakdevji, was a unique example of communal harmony. He organized celebrations in honour of Sikh, Bisnoi, Namdhari and Jain gurus. Gramothan Vidyapith, Sangaria being adjoining to Pakistan felt the heat of 1947 division of the country. He got admitted the wounded Muslims in hospitals and arranged food and shelter for them.

Obituary Reference: In the proceedings of 'Rajya Sabha'

Extract from the proceedings of 'Rajya Sabha' held on the 13th November, 1972.

Mr. chairman: I have to refer to the passing away of Swami Keshwanand.

Swami Keshwanand was born at village Magloona in Sikar Distirict and was educated at Sadhu Ashram Fazilka. Being a social worker he was associated with the spread of education and all matters connected with village upliftment. He was imprisoned several times in satyagraha movements. He was presented "Abhinanadan Granth" by the chief minister of Rajasthan on March 9-1958. He was first elected to the Rajya Sabha in 1952 and was re-elected to the House in April, 1958.

We deeply mourn the passing away of Swami Keshwanand. I would request the members to stand and observe a minutes silence as a mark of respect to the memory of the deceased.

Hon. members then stood in silence for one minute.

Gallery of Images of Swami Keshwanand

Back to The Reformers/The Leaders