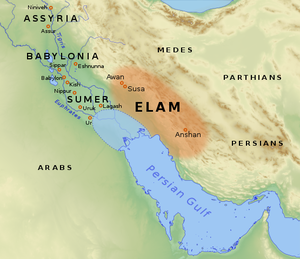 Map showing the area of the Elamite Empire (in orange) and the neighboring areas. The approximate Bronze Age extension of the Persian Gulf is shown.

The site is located 46 km north of Shiraz, in the Beyza/Ramjerd plain, in the province of Fars in the Zagros mountains, south-western Iran.

Before 1973, when it was identified as Tall-i Malyan,[1] Anshan had been assumed by scholars to be somewhere in the central Zagros mountain range.[2]

Malyan was occupied from the sixth millennium BC. During the Proto-Elamite period (late fourth millennium BC), this becomes one of the main cities of the Elamite region, thanks to its location on important trade routes. During the 'Banesh period' (3400-2800), at 50 ha, it was 5 times the size of Susa.[3]

The Marv Dasht area, where the highland city of Anshan is located, is a complex of several interconnected valleys and plains. During the mid-late Banesh Period (3100-2800 BC) Anshan also had a walled area of 200 hectares. It also featured a number of subsidiary villages and campsites.[4][5]

"Comprehensive studies of Banesh plant (Miller 1990) and animal (Zeder 1988, 1991) remains show that Banesh people focused on intensive cultivation of wheat and herding of sheep. Some craft activity, particularly ceramic and some stone vessel manufacture, was concentrated in specialized villages, at least earlier in the period (Alden 1982). In the main center, however, other craft activity, specifically copper processing, is attested only as small production areas in domestic contexts (Nicholas 1990)."[6]

The Elamite city makes an appearance in the early Sumerian epic Enmerkar and the Lord of Aratta as being en route between Uruk and the legendary Aratta, supposedly around the time writing was developed. At various times, Anshan provided, in its own right, the source for a number of Elamite dynasties that sometimes competed for extent and influence with other prominent Elamite cities.

Manishtushu claimed to have subjugated Anshan, but as the Akkadian empire weakened under his successors, the native governor of Susa, Kutik-Inshushinak, a scion of the Awan dynasty, proclaimed his independence from Akkad and captured Anshan (some scholars have speculated that the name Awan is an alternate form of Anshan). Following this, Gudea of Lagash claimed to have subjugated Anshan, and the Neo-Sumerian rulers Shulgi and Shu-Sin of Ur are said to have maintained their own governors over the place. However their successor, Ibbi-Sin, seems to have spent his reign engaged in a losing struggle to maintain control over Anshan, ultimately resulting in the Elamite sack of Ur in 2004 BC, at which time the statue of Nanna, and Ibbi-Sin himself, were captured and removed to Anshan.[7] In the Old Babylonian period, king Gungunum of Larsa dated his 5th regnal year after the destruction of Anshan.

From the 15th century BC, Elamite rulers at Susa began using the title "King of Anshan and Susa" (in Akkadian texts, the toponyms are reversed, as "King of Susa and Anshan"),[8] and it seems probable that Anshan and Susa were in fact unified for much of the "Middle Elamite period". The last king to claim this title was Shutruk-Nahhunte II (ca. 717-699 BC).[8]

Anshan fell under Persis Achaemenid rule in the 7th century BC, having been captured by Teispes (675–640 BC), who styled himself "King of the city of Anshan". For another century during the period of Elamite decline, Anshan was a minor kingdom, until the Achaemenids in the 6th century BC embarked on a series of conquests from Anshan, which became the nucleus of the Persian Empire. The most famous conqueror who rose from Anshan was Cyrus the Great.

The Chronicle of Nabonidus tells ...."King Astyages called up his troops and marched against Cyrus, king of Anšan (southwest Iran), in order to meet him in battle. The army of Astyages revolted against him and in fetters they delivered him to Cyrus. Cyrus marched against the country Ecbatana; the royal residence he seized; silver, gold, other valuables of the country Ecbatana he took as booty and brought to Anšan."[9]

The site of Anshan covers around 200 hectares. It had been occupied since ca. 5500 BC or earlier. The main feature is a low flat-topped mound of about 130 hectares running 4–6 meters in height. On three sides are the remains of a city wall 5 kilometers in length dating from the Late Banesh and Kaftari periods. Finds at Tall-i Malyan included primarily Proto-Elamite and Middle Elamite cuneiform tablets, seals, and a pottery sequence important to dating the chronology of the region. The most notable find was a building brick of Elamite king Hatelutus-Insusinak which confirmed that the site was indeed Anshan.

The site was first worked by Fereidoon Tavallali of the Archaeological Service of Iran in 1961. No records or publications of that effort appear to exist, though some artifacts ended up in the Persepolis Museum. Scientific excavation began in 1971 with a team, led by William Sumner, from the University of Pennsylvania and Ohio State University after a survey in 1968.[10][11][12][13] The dig continued for several seasons until 1978, when the Iranian Revolution intervened. Most recently, Tal-i Malyan was excavated by Kamyar Abdi in 1999.[14] [15] A further 6 week dig was conducted in 2004 by the Cultural Heritage Organization of Iran and Dartmouth College.[16]