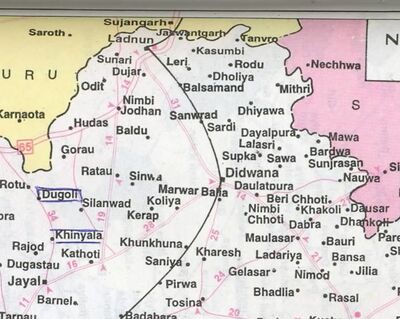 Location of Balsamand in Nagaur district

From the history of Gana Jats we know that Gaina Jats are found in Marwar region of Rajasthan. According to Thakur Deshraj they were rulers of some republics in Didwana region in Nagaur. Probably a group of Johiya Jats was known as Gaina.

There is a village called Bardu (बड़दू) in Didwana area in which a marble stone image inscription bears a portrait of Jat chieftain named Kisna Ram Gaina, who has been shown carrying weapons and side by side is statue of his wife Sati Rani Rama. This inscription bears date as chait badi 6 samvat 1814 (1757 AD). They seem to have ruled here for many centuries. There is also a statue of a Gaina girl that bears date jeth badi samvat 1134 (1077 AD). She died here after her only son died in a war fighting bravely against muslim enemies from Sindh. For some reasons she stayed with her father in his house. [1]