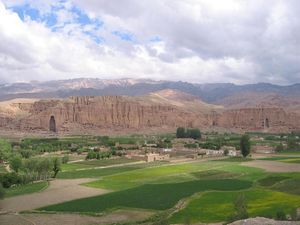 General view of the Bamiyan valley

Bamyan is the largest town in the central Afghanistan region of Hazarajat, and lies approximately 240 kilometres north-west of Kabul, the national capital.

Bamyan was the site of an early Hindu–Buddhist monastery from which Bamyan takes its name (Sanskrit Varmayana, "coloured"). Bamyan's name is translated as ‘The Place of Shining Light’. Many statues of Buddha are carved into the sides of cliffs facing Bamyan city. In 2008, Bamyan was found to be the home of the world's oldest oil paintings.[3]

The Bamiyan valley marked the most westerly point of Buddhist expansion and was a crucial hub of trade for much of the second millennium CE. It was a place where East met West and its archaeology reveals a blend of Greek, Turkish, Persian, Chinese and Indian influence.

Situated on the ancient Silk Route, the town was at the crossroads between the East and West when all trade between China and the Middle East passed through it. The Hunas made it their capital in the 5th century. Because of the cliff of the Buddhas, the ruins of the Monk's caves, Shar-i-Gholghola ('City of Sighs', the ruins of an ancient city destroyed by Genghis Khan during the 1221 siege of Bamiyan), and its local scenery, it is one of the most visited places in Afghanistan. The Shar-i-Zohak mound ten miles south of the valley is the site of a citadel that guarded the city, and the ruins of an acropolis could be found there as recently as the 1990s.[4]

The city of Bamyan was part of the Buddhist Kushan Empire in the early centuries of the Christian era. After the Kushan Empire fell to the Sassanids, Bamyan became part of the Kushansha, vassals to the Sassanids. The Hephthalites conquered Bamyan in the 5th century. After their Khanate was destroyed by the Sassanids and Turks in 565, Bamyan became the capital of the small Kushano-Hephthalite kingdom until 870, when it was conquered by the Saffarids. The area was conquered by the Ghaznavids in the 11th century. The first European to see Bamyan was William Moorcroft (explorer) about 1824.

For decades, Bamyan has been the center of combat between zealous Taliban forces and the anti-Taliban alliance; mainly Hizb-i-Wahdat – amid clashes among the warlords of local militia. Bamyan is also known as the capital of Daizangi. 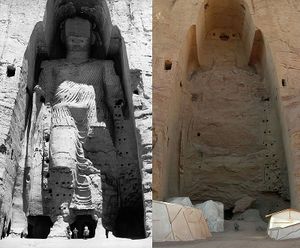 The Buddhas of Bamiyan (Persian: بت های باميان – bothā-ye Bāmiyān) were 4th and 5th Century AD monumental statues of standing Buddha, carved into the side of a cliff in the Bamyan valley in the Hazarajat by Hazaras region of central Afghanistan, 230 km northwest of Kabul at an altitude of 2,500 meters (8,200 feet). Built in 507 CE (smaller Buddha statue) and 554 CE (larger statue), these statues represented the classic blended style of Gandhara art. They were 35 and 53 meters tall, respectively.

The main bodies were hewn directly from the sandstone cliffs, but details were modeled in mud mixed with straw, coated with stucco. This coating, practically all of which wore away long ago, was painted to enhance the expressions of the faces, hands, and folds of the robes; the larger one was painted carmine red and the smaller one was painted multiple colors.

The lower parts of the statues' arms were constructed from the same mud-straw mix while supported on wooden armatures. It is believed that the upper parts of their faces were made from great wooden masks or casts. Rows of holes that can be seen in photographs were spaces that held wooden pegs that stabilized the outer stucco.

They were dynamited and destroyed in March 2001 by the Taliban, on orders from leader Mullah Mohammed Omar, after the Taliban government declared that they were idols. An envoy visiting the United States in the following weeks explained that they were destroyed to protest international aid exclusively reserved for statue maintenance while Afghanistan was experiencing famine, though the then Afghan Foreign Minister claimed that the destruction was merely about carrying out Islamic religious iconoclasm. International opinion strongly condemned the destruction of the Buddhas, which in the following years, was primarily viewed as an example of the extreme religious intolerance of the Taliban. Japan and Switzerland, among others, pledged support for the rebuilding of the statues.[9]