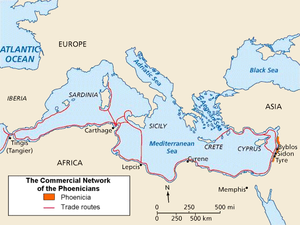 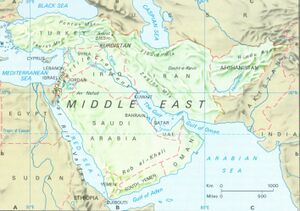 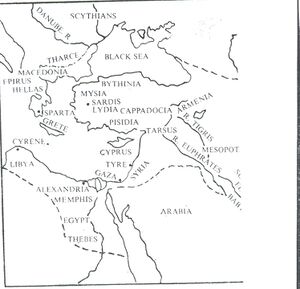 Cyprus is an island country in the Eastern Mediterranean Sea.

It is located east of Greece, south of Turkey, west of Syria and Lebanon, northwest of Israel and north of Egypt.

The earliest known human activity on the island dates to around the 10th millennium BC. Archaeological remains from this period include the well-preserved Neolithic village of Khirokitia, and Cyprus is home to some of the oldest water wells in the world.[1] Cyprus was settled by Mycenean Greeks in two waves in the 2nd millennium BC. As a strategic location in the Middle East, it was subsequently occupied by several major powers, including the empires of the Assyrians, Egyptians, and Persians, from whom the island was seized in 333 BC by Alexander the Great. Subsequent rule by Ptolemaic Egypt, the Roman Empire, the Byzantines, Arab caliphates for a short period, the French Lusignan dynasty, and the Venetians, was followed by over three centuries of Ottoman control.

The earliest attested reference to Cyprus is the 15th-century BC Mycenaean Greek ku-pi-ri-jo,[2] meaning "Cypriot", written in Linear B syllabic script.[3] The classical Greek form of the name is Κύπρος Kýpros.

Giving an account of the Jats’ settlement in Persia, Quzi Athar Mubarakpuri had stated that they had been living in this region since a long time and they had developed many big and flourishing towns of their own as we are informed by Ibn-i-Khurdazbeh (d.893AD) that at about sixty miles away from the city of Ahwaz, there is a big city of the Jats, which is known after them as al-Zutt. [4] Another geographer of the same period had also observed that in the vicinity of Khuzistan there was a grand city Haumat al-Zutt. [5] These evidences given by the eminent author are enough to suggest that the Jats who settled in Persia gradually built up their economic resources and made significant contribution to urbanization of that country. [6]

The studies of Quzi Athar Mubarakpuri also bring to light that the Jats did not remain confined to Persia. They got settlement in different Parts of Arab land, which was under the Persian rule in those days. The Arab geographers testified that fact that in the coastal region of the Persian Gulf from Ubullah to Bahrain they had many pockets of their population and that they engaged themselves in different kind of work including cattle breeding. [7], [8] It is also confirmed by the Arab historians that in pre Islamic period their largest concentration was found in Ubullah, a fertile and pleasant place near the city of Basrah. Their second big settlement was in Bahrain where they had been residing in large numbers prior to the period of Muhammad as we are informed by Al-Baladhuri and other historians [9] In the same way, there are clear evidences for their settlement in Yemen before the advent of Islam and their important role in socio- political life of those days Yemen. In the times of pious Caliphs when Persia and many parts of the Arab region (previously ruled by Persian and Roman Kings) came under the Muslim army and a number of them got converted to Islam also. It is confirmed by different historical and geographical works, as cited by Maulana Mubarakpuri that they had settled in large number in Antioc and coastal town of Syria under the patronage of the pious and Umayyad caliphate (Khilafat-e-Rashidah and Banu Umayyad) [10], [11]

A very important and useful information that comes forth through the researches of Maulana Mubarakpuri is that the people of Makkah and Madinah in the times of Muhammad were not only familiar with the Indians, the Jats were also well known to them. On the authority of Sirat-i-Ibn-i-Hisham, Maulana has stated that once some people came from Najran to Madinah. Looking at them, Muhammad asked who are they ? They are just like Indians. [12], [13]

These Indians were assumed to be Jats (Zutt). In the same way, it is recorded in Jami-i-Tirmezi, the well known collection of Hadith that the famous Sahabi Sazrat Abdullah Ibn Masood once saw some persons in the company of Muhammad in Makkah, he observed that their hair and body structure is just like the Jats. There are also some other references in the Arabic source to the existence of the Jats in Madinah in that period. They also included a physician (Tabib) who was once consulted during the illness of Aisha, the wife of Muhammad. [14]

The seal (mudra) found in underwater excavation at Bet Dwarka corroborates the use of seals by citizens when Dvaraka was attacked by Salva, king of Saubha (Ref: Harivamsa, Bhavishaya Parva). It was used as a sort of identity card for citizens and to prevent the enemy from entering the city. The text says that it was the duty of the guards to check the identity. The seal also suggests trade and cultural contacts with Bahrain where Indus weights and Bahrain seals with Indus

[p.64]: motif and script as well as Lustrous Red Ware are found. The protohistoric sites in Bahrain were swallowed by the sea during the same period as Dvaraka was submerged (Larsen in Bahrain Through the Ages).

The inscription on the votive vessel confirms that the citizens of Dvaraka were literate and spoke Sanskrit. The occurrence of the Old Persian word "shah" may indicate the presence of foreigners at this important town. It further suggests that the Sea God Varuna was worshipped as there is a reference to him in the Epic etc. The various types and sizes of stone anchors with three holes found in large numbers in Dvaraka waters and the mooring station, at Dvaraka, discovered in the Arabian Sea prove beyond doubt the extensive overseas trade of the port of Dvaraka. The triangular 3-holed stone anchors of Dvaraka are similar to those of the 14th-12th century BC. Anchors of Cyprus and Syria (Rao S.R. 1990, 59-98 and Frost H. 1985). Such anchors must have had a much earlier origin in the Indian ports of Late Harappan days as attested by a Harappan seal depicting a triangular anchor (Konishi, M.A. 1985, 148). The triangular Lothal anchor had a single hole. By 1800 or 1700 B.C. three-holed anchors must have been invented in India. What is rather baffling is that while triangular anchors are found in Dwarka waters we are yet to find them in Bet Dwarka waters. They may be lying buried deep in the mud flats which are yet to be excavated.[15]

Ardas or Urdas or Sindhu is a very old gotra of the Jats. They are mostly Sikh Jats. They are the descendants of King Jai Dratha. As they came from Sindh they were known as Sindhi. They have been mentioned in history for various praiseworthy deeds, which have been mentioned earlier. King Jai Dratha was the son of Drudabhanu in the 52nd generation of the Urdas Branch of King Yayati and was the brother-in-law of Duryodhana. [16]

His capitals were Mathela Shorao, Mao and Shivasthan (Seistan). The Mahabharat Sabha Parva mentions Jai Daratha to be a Sindhu. About 600 years before Christ, the King of Sindhu helped the king of Cyprus, against Babylonia. But later on the king of Cyprus, on becoming very powerful drove them out of Sindh.