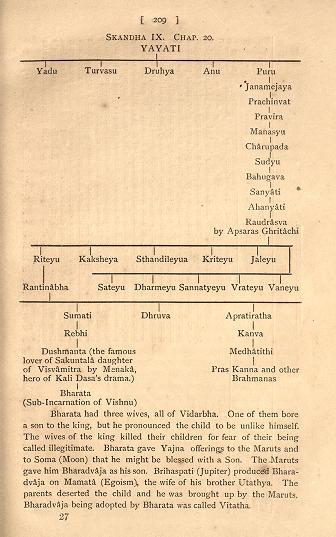 Yayati got two sons from Devyani –

The descendants of Yadu are called Yadavvanshi in which was born Krishna, the founder of Jat sangha.

Genealogical tables of Yayati dynasty are reproduced below from “Todd’s Rajasthan based on Agni Puran.[2]

Druhya and Anu are not prominently mentioned in the Puranas. At places they are not mentioned at all.

Yadu was banished from ruling and had become rebel who first started ruling in outskirts of India and then intruded the mainland. The jambudwepa referred in scriptures is believed to be in memory of these islands. The regions where the Yadu clan settled is not certain, but certain scholars suggest that Yadu clan inherited the territories to the south-west of the Gangetic plains, between the Chambal River, Betwa and Ken, which correspond to the border areas of present Indian states of Uttar Pradesh and Madhya Pradesh. Descendants of yadu were called Yadavavanshi. Krishna was born in this vansha.

Many historians consider the origin of Jats from Yadu.

Turvasu is considered to be the originator of Tomar gotra people.

According to James Todd[18] One great arm of the tree of Yayati remains unnoticed, that of Uru or Urvasu, written by others Turvasu. Uru was the father of a line of kings who founded several empires. Virupa, the eighth prince from Uru, had eight sons, two of whom are particularly mentioned as sending forth two grand shoots, Druhyu and Bhabru. From Druhyu a dynasty was established in the north. Aradwat, with his son Gandhara, is stated to have founded a State : Prachetas is said to have become king of Mlecchhades, or the barbarous regions. This line terminated with Dushyanta, the husband of the celebrated Sakuntala, father of Bharat, and who, labouring under the displeasure of some offended deity, is said by the Hindus to have been the cause of all the woes which subsequenty befell the race. The four grandsons of Dushyanta, Kalanjar, Keral, Pand, and Chaul, gave their names to countries.

The descendants of Puru included the famous Kauravas and Pandavas of Mahabharata.

The Purus are tribe or a confederation of tribes mentioned in the Rigveda. RV 7.96.2 locates them at the banks of the Sarasvati River. They were defeated by king Sudas at the Battle of the Ten Kings. The descendants of Puru were called Pauravas. The Pauravas was the name given to the many petty kingdoms and tribes of ancient northwest India in the 5th and 4th centuries BCE. The Pauravas were all situated on or near the Indus river where their monarchs grew rich and prosperous through trade. The Persian kings Darius and Xerxes claimed suzerainty over many of the Pauravas, but this claim was loose at best. The most powerful tribes, the Ambhi and Porus, were cowed by the Macedonian conqueror Alexander the Great in 326 BCE, but he did not go on to conquer the entire area because his army simply refused to go any further. The region was eventually absorbed into the Mauryan Empire.

The Druhyus were a people of Ancient India. They are already mentioned in the Rigveda.[19] They lived in the Ghandara region. They were often considered to be Dasyus.

The Puranas say that they moved north and west, and then settled in Gandhara, Aratta (northwest Punjab) and Setu. (VP IV.17) The Druhyus were driven out of the land of the seven rivers by Mandhatr and their next king Ghandara settled in a north-western region which became known as Ghandara. The sons of the later Druhyu king Pracetas finally migrate to the region north of Afghanistan.( Bhagavata 9.23.15-16; Visnu 4.17.5; Vayu 99.11-12; Brahmanda 3.74.11-12 and Marsya 48.9.)

Some scholars say they could be related to Zoroastrian, Iranian, Greek or European peoples.

They were probably a north-western people[20]. In the Hindu epics, they are connected with Ghandara.[21]

Anu In Sumerian mythology and later for Assyrians and Babylonians, Anu (also An; 𒀭) was a sky-god, the god of heaven, lord of constellations, king of gods, spirits and demons, and dwelt in the highest heavenly regions. It was believed that he had the power to judge those who had committed crimes, and that he had created the stars as soldiers to destroy the wicked. He was the father of the Anunnaku (also spelled Anunnaki).

He was the oldest god in the Sumerian pantheon, and part of a triad including Enlil, god of the sky and Enki, god of water. He was called Anu by the Akkadians, rulers of Mesopotamia after the conquest of Sumer in 2334 BCE by King Sargon of Akkad. By virtue of being the first figure in a triad consisting of Anu, Bel and Ea, Anu came to be regarded as the father and at first, king of the gods. Anu is so prominently associated with the city of Uruk, Biblical Erech in southern Babylonia that there are good reasons for believing this place to have been the original seat of the Anu cult. If this be correct, then the goddess Inanna (or Ishtar) of Uruk may at one time have been his consort.

According to the Earth Chronicles series by Zecharia Sitchin, the wife of Anu was a fertility goddess and the mother of the gods; her cult was centered in Munster. However, Anu was one of the Anunnaki who came from the planet Nibiru (Marduk). According to Sitchin's theories on Sumerian legend and lore, the Anunnaki arrived first on Earth probably 400,000 years ago, looking for minerals, especially gold, which they found and mined in Africa.

One day as Devyani and Sharmishtha along with the hoard of servants were amusing themselves in a park, King Yayati happened to pass by. Devyani had been secretly in love with Yayati as he had once rescued her from a dry well. Devyani and Sharmishtha introduced themselves to him and Devyani confessed to being in love with him and asked him to marry her. Yayati said, "Unless your father gives you to me in marriage I will not accept you as my wife." Shukracharya gave in to his daughter's request and agreed to give her away in marriage to King Yayati. As dowry he gave away Sharmishtha. He however warned Yayati that he should never let Sharmishtha share his bed.

Sharmishtha was given a place to live in a shaded glade called Ashok Vatika. One day Yayati happened to pass by Ashok Vatika where Sharmishtha lived. Seeing him, Sharmishtha confessed that she too was in love with the king and wanted him to marry her. She told him that she belonged to a royal family and Yayati could marry her. Yayti agreed and they wed in secret. They continued to meet and hid the fact from Devyani that they were married.

When Devyani came to know about the relationship of Yayati and Sharmishtha and their three sons she felt shocked and betrayed. Devyani went away to her father's house. Shukracharya was displeased with the king, and cursed that he would lose his youth and become an old man immediately.

As soon as Shukracharya uttered his curse Yayati became an old man. Shukracharya also said that his curse once uttered could not be taken back and added that the only concession he could give was that if Yayati wanted he could give his old age to someone and take their youth from them. Yayati was relieved at the reprieve he was given and confident that his sons would willingly exchange their youth with him. Yayati went back to his kingdom. Yayati requested all his five sons one by one to give their youth to him to enjoy the worldly happiness. All the sons except Puru rejected his demand. So Yayati took the youth of Puru and enjoyed all the subjects. Puru became the successor King of Yayati.

Names given in the genealogical tables include only the important personages. Other Jat gotras maybe associated with names not included. It shows that majority of Jats belong to the Yayati dynasty. The five branches of Yayati dominated the whole of Northern India, Central Asia and some European countries. European scholars have known these conquerors as of Yayati dynasty. They are remembered by different names in different countries such as Yayati, Ayati, Yati, Yuti, Yeuchi, Jutes, Jeets, Jati, Gatae, Goth etc.

History of the Jats, End of Page-28

Bhagirath brought the River Ganges into the plains in this area and as legend goes, when Jhanu Rakshash (demon) drank it all, he cut open his thigh and released the Ganga River.

Actually Jhanu is also mentioned in the tables, and, as a ruler, must have opposed or disturbed the project of bringing the Ganga to the plains.

Shiv ji married Sati and Parbati in this area. This is the land where the Yayati dynasty prospered and expanded. The Puru dynasty had their capital in this area. Excavations in the area should lead to important revelations.

Jats the descendants of Yayati

Dalip Singh Ahlawat writes that Yayati is the epi-person of Jats. Due to this reason Yayat-Yat-Jat is used for this vansh. In practice we have been calling Jats as Chandravanshi in place of Yayat-Vansh. Many of the Jat Gotras are derived from five sons of Yayati and seven gotras from sons of Virabhadra. [25]

Dalip Singh Ahlawat writes that Yayati was the ruler of Jambudwipa (Asia). The traces of Yayati rule are present historically. There is a place called Jajpur about 10 km from Kanpur in Uttar Pradesh, where one finds ruins of ancient fort known as "Yayati ke Kot" means the forts of Yayati. Similarly there is a well near Sambhar lake in Rajasthan known by the name of Devyani ka Kuan in which Devyani was pushed into the well due to enmity and Yayati had rescued her from that dry well.[26]

According to Thakur Deshraj, [27]The Chandravanshi Aryans of India had habitations in Iran which were known as Jatali. Majority of them were gyatiwadi (republics). He has refered General Cunninngham [28]who has mentioned the presence of Yayati Vanshi Jats in Jatali. Yayati was son of Nahusha. This province got the name Jatali being the habitation of Jats. The language of these Jats is Jadgali (alternate names, Jatgali, Jatki, Jat) [29]

Emperor Yayati, who was one of the ancestors of the Pandavas, venerated his ancestors with intense devotion.[30]