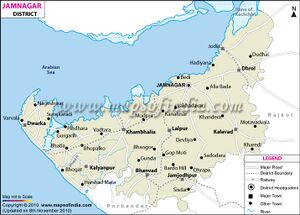 Halar (हालार) is a historical region of western India, located by the Gulf of Kutch coast on the northwestern area of Nawanagar, now Jamnagar, in Gujarat State, on Saurashtra peninsula, roughly corresponding to the present Jamnagar District, Devbhumi Dwarka district, Morbi District and Rajkot District.

Thakur Deshraj[1] writes that Raja Hala (69 AD) was Hala clan Jat Ruler of Sindh in Pakistan. The descendants of Maharaja Hala came from south to north and settled in Uttar Pradesh and Rajasthan. The group of Jats among these Kshatriyas began to be known as Hala.

According to the Bards of the Hala gotra, king Shalivahan, son of Gaj founded his capital at Sorath in Gujarat, where the descendants of king Krishna, brother of king Shalbahan ruled for several generations.[2]

In the tenth generation there was a powerful King named Hala. For 22 generations thereafter this country up to Nasik was ruled by this dynasty and was called Halar. The empire included Bengal, Karnataka, Gujrat, Sindh and Kashmir. This kingdom lasted from 187 Vikram to 227 Vikram. [3]

Bhim Singh Dahiya[4] writes:Varahamihira mentions Mana/Hala together in his Brihat Samhila the name of a people.[5] But these are two different clan names. The Mana and the Hala/Hala. The Mana are separately mentioned as a people in Mark. Purana and so are the Hala and their country in the North. [6]Mana was also supposed to be the name of Agastya's father; and consequently his family is called Mana.[7] But it is doubtful, to say the least. Rig Veda mentions a Mana, and also Sons of Mana. [8] (सूनवे मानेन मानस्य सुनवः )