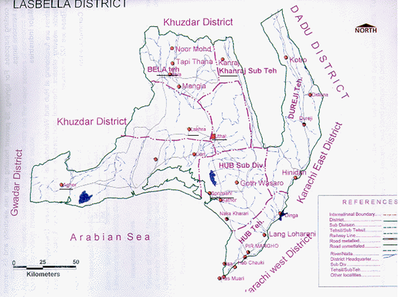 Arabhata (आरभट), is a term mentioned by Panini in Ashtadhyayi. [2]

V. S. Agrawala[3] mentions Ayudhjivi Sanghas in the Ganapatha under Yaudheyadi group, repeated twice in the Panini's Ashtadhyayi (IV.1.178) and (V.3.117) which includes - Vārteya – which may be identified with the Indian tribe Oreitai[4], settled to the west of the river Porali which now falls in to the Sonmiani Bay (Lasbela district of Balochistan province of Pakistan), west of Karachi. (cf. Saunamāneya in Subhrādi gana IV.1.123;IV.1.86). According to Curtius the tribe had long maintained its independence in those parts and it negotiated peace with Alexander through their leaders, which reflects its Sangha character.

On the east of river Arabis (old name of Porali) was another independent tribe which the Greeks called Arabitai, corresponding to Sanskrit Ārabhaṭa (the home of the Ārabhaṭi vritti), a word unknown in Paninian geography, but both of them as the Greeks noted, lay within the geographical limits of India.

Greek historians named it as Aarabes, its eastern side was called Arabti and area of westren side of its bank as Orieti. After the month of September the water level of the river remains up to 8 inches. Its banks are at considerable height covered by greenery. Rainy branches Sarona, Samutri and Veera carry rainy water into it. The fish of Hub are tasty".[5]

Alexander the Great crossed Hub River through Lasbela on his way back to Babylon after conquering Northwestern India. Alexander mentions the river name as Arabius, and local people as Oreitans.[6]

In 711 CE, the Arab general, Muhammad bin Qasim crossed Hub River when he passed through Lasbela on his way to Sindh.

Arrian[7] writes....The season of the year was then unfit for voyaging; for the periodical winds prevailed, which at that season do not blow there from the north, as with us, but from the Great Sea, in the direction of the south wind.[1] Moreover it was reported that there the sea was fit for navigation after the beginning of winter, from the setting of the Pleiades[2] until the winter solstice; for at that season mild breezes usually blow from the lands drenched as it has been with great rains; and these winds are convenient on a coasting voyage both for oars and sails. Nearclius, who had been placed in command of the fleet, waited for the coasting season; but Alexander, starting from Patala, advanced with all his army as far as the river Arabius.[3] He then took half of the shield-bearing guards and archers, the infantry regiments called foot Companions, the guard of the Companion cavalry, a squadron of each of the other cavalry regiments, and all the horse-bowmen, and turned away thence on the left towards the sea to dig wells, so that there might be abundance, of them for the fleet sailing along on the coasting voyage; and at the same time to make an unexpected attack upon the Oritians,[4] a tribe of the Indians in this region, which had long been independent. This he meditated doing because they had performed no friendly act either to himself or his army. He placed Hephaestion in command of the forces left behind. The Arabitians,[5] another independent tribe dwelling near the river Arabius, thinking that they could not cope with Alexander in battle, and yet being unwilling to submit to him, fled into the desert when they heard that he was approaching. But crossing the river Arabius, which was both narrow and shallow, and travelling by night through the greater part of the desert, he came near the inhabited country at daybreak. Then ordering the infantry to follow him in regular line, he took the cavalry with him, dividing it into squadrons, that it might occupy a very large part of the plain, and thus marched into the land of the Oritians. All those who turned to defend themselves were cut to pieces by the cavalry, and many of the others were taken prisoners. He then encamped near a small piece of water; but when Hephaestion formed a junction with him, he advanced farther. Arriving at the largest village of the tribe of the Oritians, which was called Rhambacia,[6] he commended the place and thought that if he colonized a city there it would become great and prosperous. He therefore left Hephaestion behind to carry out this project.[7]

1.These periodical winds are the southerly monsoon of the Indian Ocean. Cf. Arrian (Indica, 21).

3.This river, which is now called the Purally, is about 120 miles west of the mouth of the Indus. It is called Arabia by Arrian (Indica, 21); and Arbis by Strabo (xv. 2).

4.These were a people of Gadrosia, inhabiting a coast district nearly 200 milles long in the present Beloochistan. Cf. Arrian {Indica, 22 and 25); Pliny, vi. 23.

5.The Arabitians dwelt between the Indus and the Arabius; the Oritians were west of the latter river.

6.Rhambacia was probably at or near Haur.

7.According to Diodorus (xvii. 104) the city was called Alexandria.

Back to Rivers in Pakistan