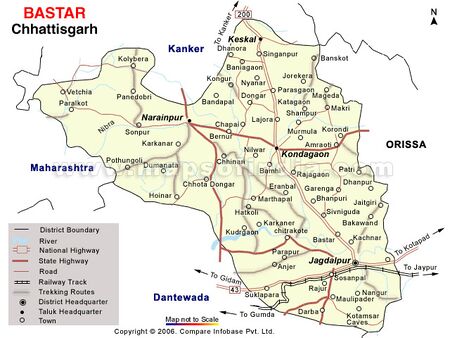 Jagdalpur (जगदलपुर) is a city and tahsil in Bastar district in Chhattisgarh. It was the capital of the erstwhile princely state of Bastar. Jagdalpur is well known for its greenery, lush green mountains, deep valleys, dense forests, streams, waterfalls, caves, natural parks, monuments, natural resources, herbs, exuberant festivity and peaceful solitude. Other tourist attractions relate to Bastar's royal past and its tribes.

The history of Jagdalpur (Bastar) takes us as deep into the past as Valmiki's Ramayana. It was the famous Dandakaranya through which Lord Rama is supposed to have passed. Scholars have also identified Valmiki's ashram here.

The Bastar rulers trace their ancestry not just to the moon, but also to Prithviraj Chauhan, the last Hindu king to rule from Delhi in the 12th century. Bastar has seen the rule of number of kingdoms like the Nals, Chalukyas and the Kakatiyas.

Bastar has seen several hundred years of royal rule, wars of succession, conquering of kingdoms, battles, conspiracies etc. After Annam Deo it witnessed the rule of Hamir Deo, Pratap Raj Deo, Rajpal Deo, Dalpat Deo and others. It was during the reign of Dalpat Deo that the capital of their kingdom was shifted to Jagdalpur.

After the death of Daryao Deo, his eldest son Mahipal Deo succeeded to the throne of Bastar. He was latter succeeded by Bhopal Deo. Bhairam Deo was the next successor.

Bhairam Deo died in 1891, leaving a minor son, Rudrapratap Deo. During his minority the state was managed by the government until January 1908 when the young Raja was installed as Feudatory Chief of Bastar. In 1910 a tribal revolt occurred against the Diwan and the British government who ruled over the state. Raja Rudrapratap Deo died in 1921 and his daughter Praphul Kumari Devi ascended the throne in 1922. She married the prince of Mayurbhanj, a prince from the State of Odisha.

Praphul Kumari Devi died in 1936 in London and her elder son Maharaja Pravir Chandra Bhanj Deo, first Oriya ruler of Bastar and the 20th Maharaja of Bastar, ascended the throne in 1936 as a minor. The famous Maharani hospital at Jagdalur was built in memory of Maharani Praphul Kumari Devi in 1937.

Maharaja Pravir Chandra Bhanj Deo was killed in a "police action" on 25 March 1966 when he revolted against the Union Of India for the rights of tribals in his erstwhile principality. Scores, if not hundreds, of tribals were killed in that police action defending their former ruler,[citation needed] who ultimately succumbed to 13 bullet injuries in Baster Palace. The current Maharaja Kamal Chandra Bhanj Deo is his grand son.

Devi Mavali is consider as elder sister of goddess Danteswari, presiding deity of Narayanpur, the temple is situated in front of Danteswari temple. This temple have series of Temple of other gods and goddess like goddess kali, shiva(bhairava) has great significance because in dashara festival all most rituals, offering is done in mavli temple.