Doda in Jammu and Kashmir 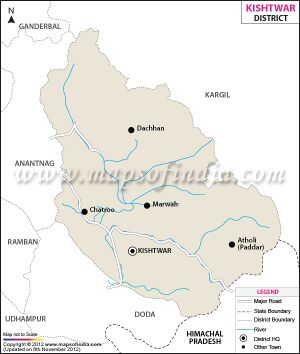 Kishtwar is a town and District in Jammu and Kashmir. Its ancient name was Kashtavata (काष्टवात).

Padder Sub-District: Padder tehsil is the most remote town of the district bordered by Zanskar to the east and towered by the Sickle Moon Peak.

Alexander Cunningham[4] writes that Chamba is a large district, which includes the valleys of all the sources of the Ravi, and a portion of the upper valley of the Chenab, between Lahul and Kashtwar. It is not mentioned by Hwen Thsang, and therefore, probably included by him within the limits of Kashmir

Kishtwar is first referred to in the Rajatarangini by the ancient name Kashthavata, during the reign of Raja Kalsa of Kashmir (1063–1089), when "Uttamaraja", the ruler of Kashthavata visited the court of the Kashmir King in company with several other hill chiefs to pay their respects to the Raja.

The Mehta Family was given the lands of Kishtwar by the King of Kashmir. Their family temple "Hatta Wali Mata" and their heritage can still be tracked back to Kishtwar. The founder of this family was the Commander-in-Chief of the Kashmir Army "Sip-E-Salar Sri Jiya Lal Mehta". Known for his bravery and valour he fought the Mughals and northern raiders who invaded the land. Kishtwar merged with the State of Jammu and Kashmir in 1821, A.D. With the passage of time Kishtwar became a Tehsil of District Udhampur and remained so until 1948, when it became part of the newly created Doda District in the wake of first re-organization of the state during the post-independence period.

Rajatarangini[6] tells us....As the day expired, the army thus stood panic struck, but Sussala, out of pity for them, burnt down the strong position occupied by the enemy. Sanjapala entered the palace by moonlight through the straight gate facing the village, and opened the gate and fought with the soldiers who were in, the court-yard. Tilaka apprehended that Sanjapala's death was inevitable amidst the enemy's soldiers within the palace and therefore followed him. Keshava also who was brought from Darad by Sanjapala fought equally well with Sanjapala at the dreadful fight that took place at Kashtavata. (VIII, p.34)