Kaba, also Caba, is a clan of the Pramara in Afghanistan.[1] Celebrated in Saurashtra in ancient times, a few yet in Sirohi.Kaba is one of Thirty-Five branches of the Pramaras. [2]

James Tod[3] places Kaba in the list of Aboriginal Races, many names in which are not capable of identification, and their correct form is uncertain and those of the mercantile tribes are largely groups confined to Rajasthan.

Sir H. M. Elliot Edited by John Dowson mentions that Sultan Shamsu-d dunya wau-d din Abu-l Muzaffar Altamsh was purchased by a merchant whose name was Haji Bukhari, and he sold him to another merchant named Jamalu-d din Chast Kaba, who brought him to Ghazni. [4]

According to James Tod[5] It would be vain to speculate upon the first colonization of India proper by the Rajcula, or 'royal tribes.' It appears to have

[p.193]: possessed an indigenous population prior to the races of Surya, or Indu, though the genealogies which give the origin of these degraded races of Cabas,1 Bhils, Meras, Goands, &c. assert that they were all from the same stem, and that their political debasement was the effect of moral causes. But as there is no proof of this, we must attribute the fable to the desire of the Brahmin archaeologist to account for the origin of all things. Modern inquiries into these matters have been cramped by an erroneous and contracted view of the power of this ancient people, and the direction of that power. It has been assumed that the prejudices originating in Mooslem conquest, which prevented the Hindu chieftain from crossing the forbidden waters of the Attoc, and still more from " going down to " the sea in ships," had always existed. But were it not far more difficult to part with erroneous impressions than to receive new and correct views, it would be apparent that the first of these restrictions is of very recent origin, and on the other hand, that the Hindus of remote ages possessed great naval power, by which communication must have been maintained with the coasts of Africa,2 Arabia, and Persia, as well as the Australian Archipelago.3 It is ridiculous, with all the knowledge now in our possession, to suppose that the Hindus always confined themselves within their gigantic barriers, the limits of modern India. The cosmography of the Puranas, imperfect and puerile as it is, and some of the texts of Manu, afford abundant evidence of an intimate intercourse between the countries from the

1 The Caba race is almost extinct ; it was famed, even in the days of Krishna, as the savage inhabitants of Saurashtra. When the forester Bhil, who mortally "Wounded Krishna, was expressing his contrition for the unintentional act, he was forgiven, with the remark, that it was only retributive justice, as "in a former birth", as the godlike Rama, Krishna had slain him. Thus Rama appears as the subjugator and civilizer of these indigenous tribes, of whom the Kaba are described as plundering Krishna's family after his decease.

2 Whence the Hindu names of towns at the estuaries of the Gambia and Senegai rivers, the Tambaconda and other condas, already mentioned?

3 Mr. Maraden, at an early period of his researches into Hindu literature, shares the merit of discovering with Sir W. Jones, that the Malayan language, disseminated throughout the Archipelago, and extending from Madagascar to Easter Island, a space of 200° of longitude, is indebted to the Sanscrit for considerable number of its terms, and that the intercourse which effected this was many centuries previous to their conversion to the Mahomedan religion. He is inclined to think that the point of communication was from Guzzerat. The legends of these islanders also abound with allusions to the Mahabharata and Ramayana. (See Asiatic Res., Vol. IV, p. 226, Second Edition.)

Since Mr. M. wrote, the revelation of the architectural antiquities in these isles, consequent to British Conquests, establishes the fact that they were colonized by the Suryas, whose mythological and heroic history is sculptured in their edifices and maintained in their writings. Nor should we despair that similar discoveries may yet disclose the link which of yore connected India with Egypt, and to which Ceylon was but the first stepping-stone. That Rama proceeded great naval means is beyond doubt, inherited from his ancestor Sagara 'the sea-king' twenty generations before the hero of Lanka, which place I havelong imagined to be Ethiopia ; whence ancient writers assert Egypt to have had her institutions, and that the Ethiopians were of Indian origin. Cavier, quoting Syncellus, even assigns the reign of Amenophis as the epoch of the colonization of Ethiopia from India.— Page 180of his 'Discours' &c.

[p.194]: Oxus to the Ganges ; and even in their allegories, we trace fresh streams of knowledge flowing into India from that central region, stigmatized in latter days as the land of the barbarian (Mlechchha). 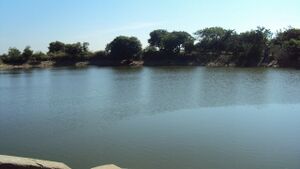