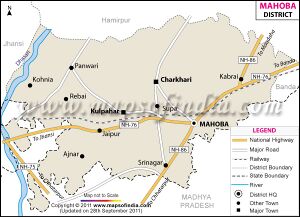 Kulpahar (कुलपहाड़) is a city and tahsil in Mahoba district of Uttar Pradesh, India. It is a historical town in the Bundelkhand region.

Kulpahar is on National Highway No. 76, 135 km from Jhansi and 278 km from Allahabad at an altitude of 795 feet (242 m) at Latitude 25° 19' N, Longitude 79° 39' E. Before 11 Feb 1995 Kulpahar was a Tehsil of Hamirpur District.[1] On 11 Feb 1995 Mahoba District[2] was carved out of Hamirpur, and Kulpahar is now a part of the Mahoba District. Kulpahar is known for its closeness to Khajuraho and other historic places like Mahoba, Charkhari, Kalinjar Rath, Orchha, and Jhansi. This town holds relics of temples and man-made water bodies of the Chandela Dynasty.

Historians have different theories about the origin of its name, primarily there are two opinions about the name.

Kulpahar was the capital of a princely state of the same name in British India. Kulpahar was founded in 1700 by Raja Jagat Raj[5] of Jaitpur son of Maharaja Chhatrasal, and was reorganized by Senapati, a Bundela Rajput who was the son of Raja Jagat Raj of Jaitpur grandson of Maharaja Chhatrasal. Kulpahar was captured by the British in 1804, and became a princely state in the Bundelkhand Agency of the Central India Agency. The chief resided at the town of Nowgong in Madhya Pradesh. The fort of Kulpahar, situated on a steep hill, towers more than 800 ft above the sea level, and contains the ruins of elaborately carved sculptures.

After the Mughals' fall and the rise of Chhatrasal Bundela, Kulpahar passed under his sway but failed to acquire and kind of pre-eminence. In the 17th century Chhatrasal declared independence and put a stiff resistance against Aurangzeb. He established a Bundella Principality and Bahadur Shah Moghal had to confirm all his acquisitions in the area called 'Bundelkhand'. There was a revival of hostilities during the region of reign of Farrukhsiyar when his general Mohammed Khan Bangash invaded Bundelkhand in the year 1729 AD and the aged ruler Chatrasal had to seek aid from Peshwa Baji rao. His 'Maratha'army of 70,000 men dashed from Indore (Malwa) and encamped at Mahoba. They surrounded forces of nawab Banghash who had captured Jaitpur, Belatal, Mudhari and Kulpahar etc. The Peshwa inflicted a crushing defeat over the Nawab by annihilating his forces in the dense forests of Jaitpur, Mudhari and Salat near Kulpahar. In return for this help, Chhatrasal bequeathed one third of his dominion to the Maratha Chieftain. That part included Mahoba, Shri Nagar, Jaitpur, Kulpahar etc. Later, under the treaty Bessien in 1803 AD the marathas ceded Bundelkhand area to British rulers. Its administration was, however, carried over by the subedar of Jalaun until 1858 AD when it was finally annexed by the East India Company. Kulpahar was made the headquarters of a Tehsil under the sub-division of Mahoba in the district of Hamirpur.

There are quite a few Archaeological sites in and near Kulpahar of period 10th century.[6]