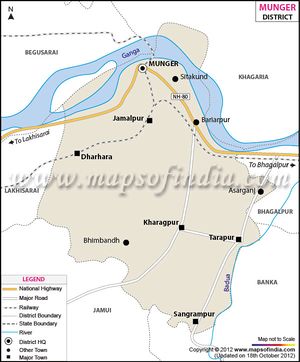 Munger (मुंगेर) is a city and district of Bihar state, in eastern India. Bhaddiya (भद्दिय) was an ancient city in the Anga country. It has been identified with modern Munger in Bihar, India.[1]

Munger District is located in the southern part of Bihar and its headquarters is located on the southern bank of river Ganges. The major rivers of this district are the Ganges, the Mohane, the Harohar and the Kiul.

There are several traditions regarding the etymology of Munger.

Hiranya-parvata was one of the Buddhist places visited by Xuan Zang in 639 AD. Alexander Cunningham[3] has identified Hiranya Parvata with Munger in Bihar state.

The territory occupied by the present day Munger district was a part of Anga mahajanapada. The Mahabharata says that it was ruled by Karna.

Mudgagiri (Munger) was the capital of the Pala empire. Bengal Nawab Mir Kasim fought one of the last battles before the East India Company captured the eastern India. The Fort built by him has three gates and the Ganges on its fourth sides.

Munger was known as Monghyr throughout British rule. In the early years of British rule Monghyr formed a part of Bhagalpur, and was not created a separate district till 1832.

Bhima's Conquests - Bhima was sent out to the East, since Bhishma thought the easterners were skilled in fighting from the backs of elephants and in fighting with bare arms, he deemed Bhima to be the most ideal person to wage wars in that region. The Mahabharata mentions several kingdoms to the east of Indraprastha which were conquered by Bhima. According to Sabha Parva, Mahabharata/Book II Chapter 26 & Sabha Parva, Mahabharata/Book II Chapter 27 Bhimasena subjugated the countries which include Modagiri.[7]

Alexander Cunningham[8] writes that At 200 li, or 33 miles, to the east of Rohinala, Hwen Thsang reached the capital of the kingdom of I-lan-na-po-fa-ta, or Hiranya-Parvata, that is, the "Golden Mountain." Close to the city stood Mount Hiranya, " from which issued smoke and vapours that darkened the sun and moon."[9] The position of this hill is determined, from its proximity to the Ganges, and from its bearings and distances from Rohinala and Champa, to be Mongir. No smoke now issues from the hill, but the numerous hot springs in the neighbouring hills show that volcanic action still exists within a few miles of Mongir. These hot springs are mentioned by Hwen Thsang.

The advantageous position of this isolated hill on the bank of the Ganges, which commanded the land route between the hills and the river, as well as the water route by the Ganges, must have led to its occupation at a very early date. Accordingly it is mentioned in the Mahabharata as Modagiri (मोदागिरि), which was the capital of a kingdom in eastern India, near Banga and Tamralipta, or Bengal and Tamluk. At the time of Hwen Thsang's visit the king had been lately ejected by the Raja of a neighbouring state. The kingdom was bounded by the Ganges on the north, and by great forest-clad mountains on the south ; and as its circuit is estimated at 3000 li, or 500 miles, it must have extended to the south as far as the famous mountain of Parasnath, which has an elevation of 4478 feet. I would therefore fix its limits as extending from Lakhi Sarai to Sultanganj on the Ganges in the north,

[p.477]: and from the western end of the Parasnath hill to the junction of the Barakar and Damuda rivers in the south. The circuit of this tract is 350 miles, measured direct on the map, or upwards of 420 miles by- road distance following the windings of the two rivers.