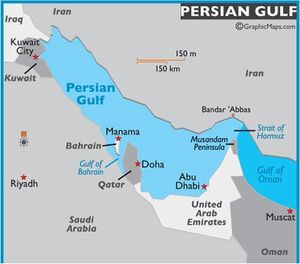 This body of water is an extension of the Indian Ocean (Gulf of Oman) through the Strait of Hormuz and lies between Iran to the northeast and the Arabian Peninsula to the southwest. The Shatt al-Arab river delta forms the northwest shoreline.

The Persian Gulf was a battlefield of the 1980–1988 Iran–Iraq War, in which each side attacked oil tankers. It is the namesake of the 1991 Gulf War, the largely air-and land-based conflict that followed Iraq's invasion of Kuwait in 1990.

The gulf has many fishing grounds, extensive coral reefs, and abundant pearl oysters, but its ecology has been damaged by industrialization and oil spills.

The Persian Gulf naming dispute is concerned with the name of the body of water known historically and internationally as the Persian Gulf, after the land of Persia (Iran). The name has been disputed by some Arab countries since the 1960s in a dispute with origins in the Muslim conquest of Persia and the emergence of pan-Arabism and Arab nationalism, resulting in the terms Arabian Gulf (Arabic: الخليج العربي‎‎). The Arab nations in the region have started calling and writing it the Arabian Gulf or just The Gulf.

The seven Arab states which border the Persian Gulf are - Bahrain, Iraq, Kuwait, Oman, Qatar, Saudi Arabia and the United Arab Emirates (UAE). This excludes the non-Arab state of Iran. So, except Iraq and Iran, the above six nations are part of the Gulf Cooperation Council (GCC).

On almost all maps printed before 1960, and in most modern international treaties, documents and maps, this body of water is known by the name Persian Gulf. This reflects traditional usage since the Greek geographers Strabo and Ptolemy, and the geopolitical realities of the time with a powerful Persian Empire comprising the whole northern coastline and a scattering of local emirates on the Arabian coast. It was referred to as the Persian Gulf by the Arabic Christian writer Agapius, writing in the 10th century.

Ch.7.7 Navigation of the Tigres by Alexander

Arrian[1] writes....Alexander now ordered Hephaestion to lead the main body of the infantry as far as the Persian Sea, while he himself, his fleet having sailed up into the land of Susiana, embarked, with the shield-bearing guards and the body-guard of infantry; and having also put on board a few of the cavalry Companions, he sailed down the river Eulaeu to the sea.[1] When he was near the place where the river discharges itself into the deep, he left there most of his ships, including those which were in need of repair, and with those especially adapted for fast sailing he coasted along out of the river Bulaeus through the sea to the mouth of the Tigres. The rest of the ships were conveyed down the Eulaeus as far as the canal which has been cut from the Tigres into the Eulaeus, and by this means they were brought into the Tigres. Of the rivers Euphrates and Tigres which enclose Syria between them, whence also its name is called by the natives Mesopotamia,[2] the Tigres flows in a much lower channel than the Euphrates, from which it receives many canals; and after taking up many tributaries and its waters being swelled by them, it falls into the Persian Sea.[3] It is a large river and can be crossed on foot nowhere as far as its mouth,[4] inasmuch as none of its water is used up by irrigation of the country. For the land through which it flows is more elevated than its water, and it is not drawn off into canals or into another river, but rather receives them into itself. It is nowhere possible to irrigate the land from it. But the Euphrates flows in an elevated channel, and is everywhere on a level with the land through which it passes. Many canals have been made from it, some of which are always kept flowing, and from which the inhabitants on both banks supply themselves with water; others the people make only when requisite to irrigate the land, when they are in need of water from drought.[5] For this country is usually free from rain. The consequence is, that the Euphrates at last has only a small volume of water, which disappears into a marsh. Alexander sailed over the sea round the shore of the Persian Gulf lying between the rivers Eulaeus and Tigres; and thence he sailed up the latter river as far as the camp where Hephaestion had settled with all his forces. Thence he sailed again to Opis, a city situated on that river.[6] In his voyage up he destroyed the weirs which existed in the river, and thus made the stream quite level. These weira had been constructed by the Persians, to prevent any enemy having a superior naval force from sailing up from the sea into their country. The Persians had had recourse to these contrivances because they were not a nautical people; and thus by making an unbroken succession of weirs they had rendered the voyage up the Tigres a matter of impossibility. But Alexander said that such devices were unbecoming to men who are victorious in battle; and therefore he considered this means of safety unsuitable for him; and by easily demolishing the laborious work of the Persians, he proved in fact that what they thought a protection was unworthy of the name.

1. The Eulaeus is now called Kara Su. After joining the Ooprates it was called Pasitigris. It formerly discharged itself into the Persian Gulf, but now into the Shat-el-Arab, as the united stream of the Euphrates and Tigris is now called. In Dan. viii. 2, 16, it is called Ulai. Cf. Pliny, vi. 26, 31; xxxi. 21.

2. The Greeks and Romans sometimes speak of Mesopotamia as a part of Syria, and at other times they call it a part of Assyria. The Hebrew and native name of this country was Aram Naharaim, or "Syria of the two rivers."

3. The Tigris now falls into the Euphrates.

6. Probably this city stood at the junction of the Tigris with the Physcus, or Odoneh. See Xenophon (Anab. ii. 4, 26); Herodotus, i. 189; Strabo, (xvi. 1) says that Alexander made the Tigris navigable up to Opis.