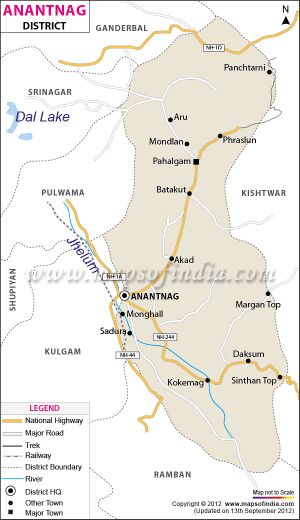 Bijbehara (बिजबेहरा) is a town in Anantnag district of Jammu and Kashmir.

Bijbehara is four miles to the north of Anantnag town. Bijbehara is located at 33.80°N 75.10°E. It has an average elevation of 1,591 metres. The town of Bijbehara is situated in the north of district headquarters on the banks of Jhelum River popularly known here as "Veth".

According to Rajatarangini [1] the place was called Vijjavihara(विज्जविहार) after Vijja, wife of Dhanya.

Bijbehara finds mention in Rajtarangini by Kalhan. Then famous for temples of Chakradhar and Vijayeshwar. Vijayeshwar temple was built by King Shachinar. This temple was reconstructed again during the reign of Anantadeva. This fortified temple was a famous site in then Kashmir (previous to 500 AD) .

The oldest Chinar tree of the sub-continent, at 70 feet circumference at ground level, is located among 24 others in a garden popularly known as Padshahi Bagh.

The Mughal Prince Dara Shikoh constructed a bridge here which was 100 yards long and 6 yards wide spanning the Jhelum River at Bijbehara near the Mughal garden. The bridge was washed away by heavy floods.

Guru Nanak had also paid a visit to this town and to commemorate this event presently a Gurudwara named "Shri Guru Nanak Dev Ji Pehli Padshahi Gurudwara Bijbehara" at this place has been built.

Rajatarangini [2] tells about Vijjavihara - Dhanya had commenced building a Vihara named Vijja, after the name of his beloved wife Vijja, who had gone to the next world. But after Dhanya had gone to the other world, the king spent some money from the remnant of Dhanya's estate to finish the Vihara. [VIII (ii), p.310]

Kashmir visit of Xuanzang in 631 AD

Alexander Cunningham[3] writes that The old town of Bij Biara, or Vijipara, is situated on both banks of the Behat River, at 25 miles to the south-east of the capital. The original name was Vijayapara, so called after the ancient temple of Vijayesa, which still exists, although its floor is 14 feet below the present level of the surrounding ground. This difference of level shows the accumulation of ruins since the date of its foundation. The people refer its erection to Asoka, B.C. 250, who is stated by Kalhan

[p.99]: Pandit[4] to have pulled down the old brick temple of Vijayesa, and to have rebuilt it of stone. This is apparently the same temple that is mentioned in the reign of Arya Raja, some centuries after Christ.[5]