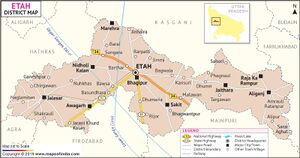 Bilsar Patti is a Village in Aliganj Block in Etah District of Uttar Pradesh State, India. It is located 62 km towards East from District head quarters Etah. 7 km from Aliganj Dehat. Bilsar Patti Pin code is 207244 and postal head office is Raja Ka Rampur. Angadpur ( 1 KM ) , Bilsarh Puwayan ( 1 KM ) , Chandanpur ( 2 KM ) , Bilsarh A Pachhayan ( 2 KM ) , Tajpur Addha ( 2 KM ) are the nearby Villages to Bilsar Patti. This Place is in the border of the Etah District and Farrukhabad District. Farrukhabad District Kaimganj is East towards this place. [1]

The earliest inscription of Kumara Gupta I, seems to be that on the Bilsad monolithic of red sand-stone dated 415-16 AD. Bilsad is a village consisting of three parts in Eta district of the United Provinces. The two inscribed pillars at Bilsad seem to have had a direct connection with a temple, now ruined. The object of the inscription is to record the accomplishment of a temple of Kartikeya, its pratoli, and the establishment of a Satra. It also gives the genealogy of the Gupta sovereign.

Kumara Gupta started his imperial career peacefully, but it ended in disaster, he had been bequeathed, by his noble and great father, the glorious heritage of the vast and well-administered Gupta Empire, and consequently the earlier part of Kumara Gupta I's long rule was by far the most prosperous period in the whole history of the Gupta dynasty. He is described, by the Manju-sri-mulakalpa, as by no means 'a weak king', but an 'excellent and leading' sovereign. Kumara Gupta I's extensive coinage and the wide distribution of his inscriptions and of the find-spots of his silver coins clearly indicate that he was able to retain intact his father's empire including the western provinces, under him. The Gadhwa stone inscription of Kumara Gupta I, is engraved immediately below the inscription of Chandra Gupta II, separated by a line across the stone. The inscription is badly damaged and no date, except the day, is available. Neither the religion, nor the object of this inscription can be determined, the only act to be gleaned therefrom being that a gift of ten dinaras and an uncertain amount was given for a Satra. The other Gadhwa inscription of Kumara Gupta I, which also is badly broken gives the date 417-18 AD. The earliest inscription of Kumara Gupta I, seems to be that on the Bilsad monolithic of red sand-stone dated 415-16 AD.

Visit by Xuanzang in 636 AD

Alexander Cunningham[4] writes that from Ahi-chhatra the Chinese pilgrim Xuanzang proceeded in a south direction a distance of from 200 to 270 li, from 23 to 25 miles, to the Ganges, which he crossed, and then turning to the south-west he arrived in the kingdom of Pi-lo-shan-na[5] His route to the south -would have taken him through Aonla and Budaon to the Budh Gunga (or old Ganges), somewhere near Sahawar, a few miles below Soron, both of which places stood on the main stream of the Ganges so late as 400 years ago. As his subsequent route is said to have been to the south-west, I believe that he must have crossed the Ganges close to Sahawar, which is 42 miles from Ahi-chhatra in a direct line. From all my early inquiries I was led to believe that Soron was the only ancient place in this vicinity ; and as Hwen Thsang does not give any distance for his south-west march, I concluded that Soron must have been the place to which he gives the name of Pi-lo-shan-na. I accordingly visited Soron, which is undoubtedly a place of very great antiquity, but which cannot, I think, be the place visited by the Chinese pilgrim. I will, however, first describe Soron before I proceed to discuss the superior claims of the great ruined mound of Atranji-Khera to be identified with the Pi-lo-shan-na of the Chinese pilgrim.

Soron is a large town on the right, or western, bank of the Ganges, on the high-road between Bareli and Mathura. The place was originally called Ukala Kshetra ; but after the demon Hiranyaksha had been killed by the Varaha Avatar, or Boar incarnation of Vishnu, the name was changed to Sukara Kshetra, or

[p.365]: " the place of the good deed." The ancient town is represented by a ruined mound called the Kilah, or " fort," which is one quarter of a mile in length from north to south, and somewhat less in breadth. It stands on the high bank of the old bed of the Ganges, which is said by some to have flowed immediately under it so late as 200 years ago. The modern town stands at the foot of the old mound on the west and south sides, and probably contains about 5000 inhabitants. There are no dwellings on the old mound, which is occupied only by the temple of Sita-Ramji and the tomb of Shekh Jamul ; but it is covered with broken bricks of large size, and the foundations of walls can be traced in all directions. The mound is said to be the ruins of a fort built by Raja Somadatta of Soron many hundred years ago. But the original settlement of the place is very much older, being attributed to the fabulous Raja Vena Chakravartti who plays such a conspicuous part in all the legends of North Bihar, Oudh, and Rohilkhand.

The great mound of ruins called Atranji-Khera is situated on the right or west bank of the Kali Nadi four miles to the south of Karsana, and eight miles to the north of Eyta on the Grand Trunk Road. It is also 15 miles to the south of Soron, and 43 miles to the north-west of Sankisa in a direct line, the road distance being not less than 48 or 50 miles. In the ' Ayin Akbari' Atranji is recorded as one of the parganahs of Kanoj, under the name of Sikandarpur Atreji[6] Sikandarpur, which is now called Sikandrabad, is a village on the left bank of the Kali Nadi opposite Atranji. From this it would appear that Atranji was

[p.366]: still occupied in the reign of Akbar. The parganah was afterwards called Karsana, bat it is now known by the name of Sahawar Karsana, or of Sahawar only. The name given by the Chinese pilgrim is Pi-lo-shan-na, for which M. Julien proposes to read Virasana.

So far back as 1848 I pointed out that, as both. pil and kar are Sanskrit names for an elephant, it was probable that Pilosana might be the same as Karsana, the large village which I have already mentioned as being four miles to the north of Atranji Khera. The chief objection to this identification is the fact that Karsana is apparently not a very old place, although it is sometimes called Deora Karsana, a name which implies the possession of a temple of note at some former period. It is, however, possible that the name of Karsana may once have been joined to Alranji in the same way that we find Sikandarpur Atreji in the ' Ayin Akbari.' As the identification oi Karsana with Pilosana is purely conjectural, it is useless to hazard any more speculations on this subject. The bearing and distance from Sankisa, as recorded by Hwen Thsang, point to the neighbourhood of Sirpura, near which there is a small village called Pilkuni or Pilokuni, which is the Pilukhoni of our maps. It is, however, a very petty place ; and although it boasts of a small khera, or mound of ruins, it cannot, I think, have ever been more than one-fourth of the circuit of two miles which Hwen Thsang attributes to Pi-lo-shan-na. But there are two strong points in its favour — namely, 1st, its position, which agrees both in bearing and distance with the Chinese pilgrim's account ; and 2nd, its name, which is almost identical with the old name, sh being very commonly pronounced as kh, so that Hwen

In proposing Atranji-Khera as the site of the ancient Piloshana, I am influenced solely by the fact that this is the only large place besides Soron of any antiquity in this part of the country. It is true that the distance from Sankisa is somewhat greater than that recorded by the Chinese pilgrim, — namely, 45 miles, instead of 33 miles ; but the bearing is exact ; and as it is quite possible that there may be some mistake in Hwen Thsang's recorded distance, I think that Atranji-Khera has a better claim than any other place to be identified with the ancient Piloshana.

The only objection to the identification of Atranji with Piloshana is the difference between the distance of 200 li, or 33 miles, as stated by Hwen Thsang, and the actual distance of 43 miles direct, or about 48 or 50 miles by road. I have already suggested the possibility of there being some mistake in the recorded distance of Hwen Thsang, but perhaps an equally probable explanation may be found in the difference of the length of the yojana. Hwen Thsang states that he allowed 40 Chinese li to the yojana ; but if the old yojana of Rohilkhand differed from that of the central Doab as much as the kos of these districts now differ, his distances would have varied by half a mile in every kos, or by two miles in every yojana, as the Rohilkhand kos is only 1½ mile, whilo that of the Doab is two miles; the latter being one-third greater. Now if we apply this difference to Hwen Thsang's measurement of 200 li, or 33 miles, we increase the distance at once to 44 miles, which agrees with the direct measured distance on the map. I confess, however, that I am

[p.368]: rather inclined to believe in the possibility of there being a mistake in Hwen Thsang's recorded distance, as I find exactly the same measurement of 200 li given as the distance between [[Sankisa] and Kanoj. Now, the two distances are precisely the same, — that is, Sankisa is exactly midway between Atranji and Kanoj ; and as the latter distance is just 50 miles by my measurement along the high-road, the former must also be the same. I would therefore suggest the probability that both of these distances should be 300 li, or 50 miles, instead of 200 li, as recorded in the text. In favour of this proposed correction I may cite the testimony of the earlier Chinese pilgrim Fa-Hian, who makes the distance from Sankisa to Kanoj 7 yojanas, or 49 miles.[7] At Hwen Thsang's own valuation of 40 li to the yojana, this measurement would give 280 li; and as Fa-Hian does not record half yojanas, we may increase the distance by half a yojana, or 20 li, which will bring the total up to 300 li, or 50 miles.

But whatever may be the true explanation of the difference between the actual distances and those recorded by Hwen Thsang, there still remains the important fact that Sankisa was exactly midway between Kanoj and Piloshanna, just as it now is midway between Kanoj and Atranji. If we couple this absolute identity of position with the fact that Atranji is the only old place in the part of the country indicated by Hwen Thsang, we can scarcely arrive at any other conclusion than that the great ruined mound of Atrauji is the site of the ancient Piloshana. This conclusion is strengthened by the fact that the mound of Atranji correspunds almost exactly in size with

[p.369]: Hwen Thsang's measurement of 12 li, or 2 miles, for Piloshana. The mound is 3250 feet in breadth at base, or a little more than 2 miles in circuit. Its highest point is 44-3/4 feet above the level of the country ; but there are no remains save the foundations of walls and masses of broken brick.

Piloshana is said to have been 2000 li, or 333 miles, in circuit ; but this is certainly too great. With reference to the surrounding districts, its limits may be defined approximately as extending from Bulandshahar to Firuzabad on the Jumna and Kadirganj on the Ganges, which would give a circuit of not more than 250 miles.