Location of Chohtan in Barmer District 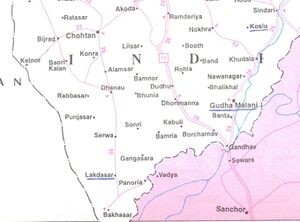 Location of Chohtan in Barmer District

The village is around 50 KM far from Barmer. It is connected via road to Barmer. The village got the importance because of proximity to Pakistan border.

There are many famous temples around this village like Viratra, Deri Dungar, Sunya mata ka mandir etc. Virata is one the beautiful temple in Chohtan. Chohtan is surrounded by hill in east and north and by desert west and south.

James Tod[1] writes that Juna Chhotan, or the ' ancient ' Chhotan, though always conjoined in name, are two [303] distinct places, said to be of very great antiquity, and capitals of the Hapa sovereignty. But as to what this Hapa Raj was, beyond the bare fact of its princes being Chauhan, tradition is now mute. Both still present the vestiges of large cities, more especially Juna, ' the ancient,' which is enclosed in a mass of hills, having but one inlet, on the east side, where there are the ruins of a small castle which defended the entrance. There are likewise the remains of two more on the summit of the range. The mouldering remnants of mandirs (temples), and baoris (reservoirs), now choked up, all bear testimony to its extent, which is said to have included twelve thousand habitable dwellings ! Now there are not above two hundred huts on its site, while Chhotan has shrunk into a poor hamlet. At Dhoriman, which is at the farther extremity of the range in which are Juna and Chhotan, there is a singular place of worship, to which the inhabitants flock on the tij, or third day of Sawan of each year. The patron saint is called Alandeo, through whose means some grand victory was obtained by the Mallani. The immediate objects of veneration are a number of brass images called Aswamukhi, from having the ' heads of horses ' ranged on the top of a mountain called Alandeo. Whether these may further confirm the Scythic ancestry of the Mallani, as a branch of the Asi, or Aswa race of Central Asia, can at present be only matter of conjecture.

We find mention of he patron saint called Alandeo by James Tod in the history of Chohtan. There is need to research if this Alandeo had any connection with Alansi in the Burdak history. For reference we give here ancestry of Alansi:

Alansi (922 AD) was ancestor of Burdaks. Alan Singh constructed a temple at Mathura in samvat 979 (922 AD) and gifted a gold chhatra. Genealogy from Burdak history is as under: